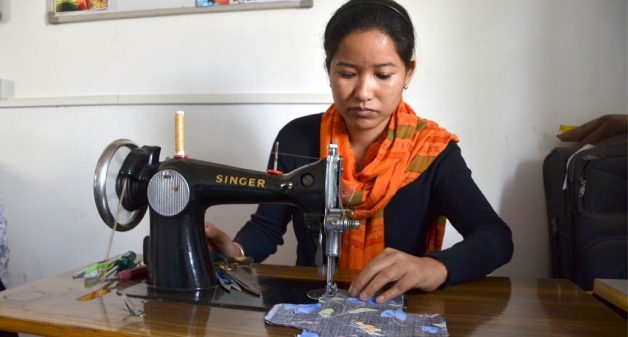 Jonali Fangsho in her late 20s is a resident of Pamohi village in the outskirts of Guwahati, the capital city of the northeastern state of Assam. Pamohi village, inhabited mostly by the Karbi tribe, is like any other underdeveloped village in Assam, where people do not speak openly about issues like menstruation and related issues.

However, things have changed over the past several months, even before the Akshay Kumar starrer PadMan, based on the real life story of Arunachalam Muruganantham, was released in India. Muruganantham, a social entrepreneur from Coimbatore in Tamil Nadu, is the inventor of a low-cost sanitary pad-making machine and is credited for innovating grassroots mechanisms for generating awareness about traditional unhygienic practices around menstruation.

In Pamohi, women and girls not only speak about their menstrual periods but have also switched to using reusable sanitary pads. They have understood the health implications of menstrual hygiene, and are taking steps to make everyone aware of it.

This change came about after Uttam Teron and Aimoni Tumung of Parijat Academy conducted public gatherings to discuss the issues of health and hygiene and distributed free samples of reusable sanitary pads to women in their neighborhood.

“It was very difficult to discuss about menstruation at home and neighborhood as women do not speak in front of male members even at home,” Fangsho told VillageSquare.in. Fangsho said that in their village and neighboring areas, where most of the families are poor and uneducated, women used old clothes during menstruation.

Discussing the topic in public gatherings was relatively easier, since the villagers know Teron and his wife Aimoni. The duo has been running Parijat Academy, a school for underprivileged children in Pamohi for more than a decade. Besides providing a residential facility for underprivileged boys and girls, they run a training center in their school premises, where they teach women tailoring and making of handicraft items.

Given their work, they are in regular touch with the villagers. Initially, Aimoni started talking about menstrual issues with the local women. Gradually they started discussing about it in public. Bringing about an awareness and change in the mindset was not easy. “It didn’t happen in a single day,” Teron told VillageSquare.in. “After seeing our involvement, men also came forward to talk about it.”

Kudu Bongjang, a local farmer, attended the public gatherings held in Garbhanga village set amidst hills in the outskirts of Guwahati. He admitted to being ignorant about the gravity of the situation. “This issue needs to be discussed openly like any other health issue,” he told VillageSquare.in.

According to the latest National Health Survey Report (Table 4.10), of the women in the age of 15 to 24 years in India, 42% use sanitary napkins, 62% use cloth and 16% use locally prepared napkins. Overall, 58% of women in this age group use a hygienic method of menstrual protection.

In Assam, about 41% of rural women in the same age group use hygienic methods of protection during their menstrual period. Rehna Sultana, an activist and a research scholar at Gauhati University said that more than 70% rural women still do not use sanitary pads, resulting in various diseases. 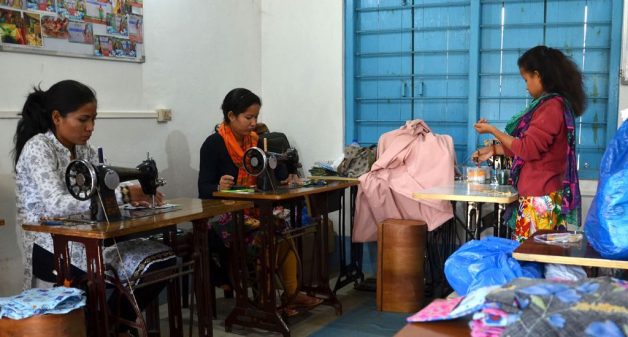 Though the government of India had started Menstrual Hygiene Scheme (MHS) in 2011 to provide sanitary pads at subsidized prices, it failed to reach the target. Health experts said that several critical complications such as vaginal or urinary tract infections would manifest if a woman did not take proper care during her menstrual period.

“It can also lead to pelvic inflammatory disease (PID) and hence overall it’s a serious issue,” Anudhriti Dutta, a consultant gynecologist at Pratiksha Hospital in Guwahati told VillageSquare.in. She said, though most of the rural women used cloth during the menstrual periods, the scenario is changing gradually.

Sultana found lack of awareness and poverty the prime reasons for women not using hygienic pads. “When I travel to rural places, I find that most of the girls skip their classes during menstruation,” she said.

She emphasized the need to overcome the problem, since health and hygiene of a woman are crucial. She said she had posted pictures of herself posing with sanitary pads in social media, for awareness.

Fangsho said several women fell ill since they did not use hygienic menstrual protection. “They didn’t know the proper way of hygiene, but now I’m happy to see the change,” she said.

The seeds of change were sown in the month of July in 2017, when a few volunteers from Florida working on the Days for Girls campaign visited Parijat Academy. Aimoni recalled how Dollean Perkins and her fellow volunteers helped them make reusable sanitary pads with cotton cloths.

“They were rather shocked seeing the poor health and hygiene of the girls and women in our neighborhood,” Aimoni told VillageSquare.in.At the school’s training center, 15 girls learned to make the reusable pads. 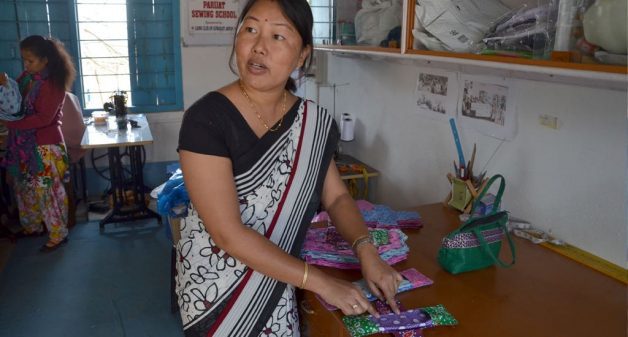 The pads have two parts — a shield and a liner. The girls stitch three pieces of cotton and flannel cloth into shape and add two plastic buttons to clip it to the undergarment, besides the leak-proof polyurethane laminate (PUL) fabric that is tucked inside.

Tulsi Ingti, whose daughter studies in Parijat Academy, said that she started using single-use sanitary pads after her daughter discussed the issue with her. Now she uses the reusable pads. Aimoni has also been using the pads that they make and finds them user-friendly. She emphasizes the need to wash them properly and dry them.

“To manage the expenses we have fixed a price for the pads,” Aimoni told VillageSquare.in. The team has priced the large and small ones at Rs 110 and Rs 80 per pad respectively. Aimoni said that the pads could be used for three years.

Though they used to distribute single-use sanitary pads earlier for free, their new initiative helps them supply free samples of the reusable pads to the neighboring areas such as Garbhanga village and also to the mothers of their students, most of whom are below poverty line. “Besides, several organizations that wanted to distribute them have ordered and bought in bulk from us,” said Aimoni.

Ingti, who has switched to reusable pads, finds them economical. Aimoni concurs. Bongjang said he will not mind spending money on sanitary pads, but wished that the prices were lower. He earns less than Rs 5,000 a month and has four female members in the family.

So far, the team has been distributing the reusable pads for free and hence the question of cost did not arise. With most men being farmers, some women working in the agricultural fields and some men in low-paying jobs in cities, the price may be a concern.

Teron said that it’s the responsibility of every individual to create awareness about the health and hygiene of women. “We are planning to distribute free reusable sanitary pads to around one lakh girls and women who cannot afford to buy them,” he said. It would mean making more reusable pads.

Girls who studied in Parijat Academy and other young girls from the village stitch the reusable pads. “We can stitch up to 30 pads every day,” Jamuna Boro told VillageSquare.in. Stitching pads has become a source of livelihood for these girls. They can earn up to Rs 3,000 a month.

“I’m happy about the warm response we have been getting from everybody since we started distributing reusable pads,” Teron told VillageSquare.in. “But we need some financial assistance to reach the maximum number of girls and women in the backward areas.”

Abdul Gani is a journalist based in Guwahati