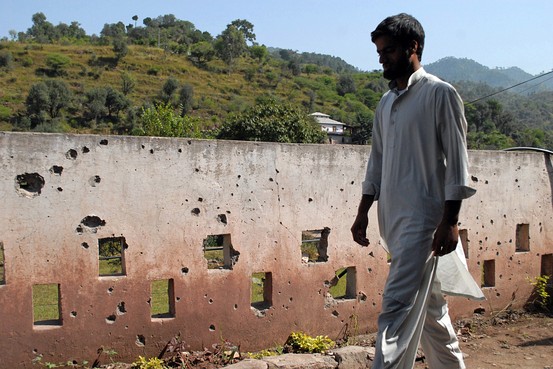 A Pakistani Kashmiri resident walks past a shrapnel-marked boundary wall of a house hit by shelling from Indian troops at Darra Sher Khan area on the Line of Control, which separates Indian- and Pakistani-administered Kashmir.

After nearly a week of heavy cross-border firing, the boundary between India and Pakistan largely fell quiet over the weekend, though diplomatic tempers continued to flare.

There was no exchange of fire Sunday night, a spokesman for India’s Border Security Force said, raising hopes of an end to the current round of hostilities, which has left at least 17 people dead and displaced hundreds of thousands of people on both sides.

But the intense fighting and the strong political reactions it has provoked in New Delhi and Islamabad are likely to have a lasting impact on the fragile relationship between the rival neighbors.

The hostilities revealed a tough approach toward Pakistan by Indian Prime Minister Narendra Modi at a time when Pakistan’s military, which is deeply wary of India, is asserting its influence over Islamabad’s beleaguered civilian government.

In a letter to United Nations Secretary-General Ban Ki-moon on Saturday, Sartaj Aziz, the Pakistani Prime Minister’s advisor on national security, accused India of “deliberate and unprovoked” firing that killed 12 people in Pakistan.

Mr. Aziz also raised an issue that lies at the core of the conflict between the two countries: Kashmir.

The territory of Kashmir is administered in part by both India and Pakistan, but is claimed by both in full. Decades of two-way talks have failed to find a solution.

In his letter, Mr. Aziz reiterated Pakistan’s longstanding request for the international community to step in, saying the U.N. had a responsibility to hold a plebiscite “for self-determination of the people of Jammu and Kashmir” for “durable peace and security in the region.”

Mr. Aziz echoed remarks made by Pakistani Prime Minister Nawaz Sharif in a speech to the U.N. General Assembly in September when he called for international help to help broker a solution on the Kashmir dispute.

India has dismissed Islamabad’s diplomatic moves, criticizing what it calls Pakistan’s attempts to “internationalize” the Kashmir dispute. New Delhi says the Kashmir question is for the two countries to resolve between themselves.

As fighting on the border intensified last week, Indian officials accused Pakistan’s army of deliberately escalating tensions to draw international attention to Kashmir by presenting it as a potential nuclear flashpoint.

Underscoring the distance between the countries on the issue, Pakistan has called for a strengthening of the role of the U.N. Military Observer Group in India and Pakistan, a body formed in the 1940s to help maintain peace on the troubled frontier.

The recent exchange of fire and diplomatic protests has made the prospect of dialogue bleak. The new Indian government has outlined strict parameters for discussions with Pakistan. It called off talks between the countries’ foreign secretaries in August over a Pakistani envoy’s meeting with Kashmiri separatists — taking a tougher stand than its predecessor.

Mr. Modi has since said his administration will not negotiate “under the shadow of terror” – a reference to India’s allegations that Pakistan sponsors militant attacks against India. Pakistan denies such activities.

On Mr. Modi’s recent visit to Washington, the U.S. and India agreed to take “joint and concerted efforts” against Pakistan-based militant groups, including the Lashkar-e-Taiba and Jamaat ud-Dawa networks, which have launched deadly attacks on Indian soil.

Meanwhile, those living on the border on both sides say last week’s firing has brought back fears that the boundary, relatively calm since 2003 when the two countries signed a ceasefire agreement, may be headed for more violent times.