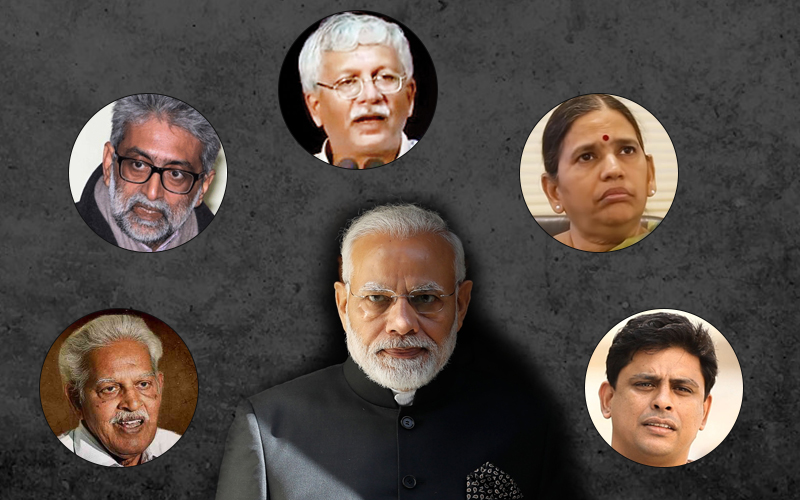 In a charge sheet filed by the Pune police against 5 civil rights activists, charging them with membership of the banned organisation CPI (M) and for plotting to Kill PM Modi

It is a mammoth 5,160-page charge sheet, written in Marathi, that Pune police has filed against the five civil rights activists arrested dramatically earlier this year. Shoma Sen, Surendra Gadling, Sudhir Dhawale, Rona Wilson and Mahesh Raut have been in jail since June this year after they were charged with being members of the banned Communist Party of India (Maoist) and for waging war against the state.

Curiously, while several TV channels went to town after November 15, when the charge sheet was filed, and claimed that the activists had also been charged with hatching a plot to assassinate Prime Minister Narendra Modi, it appears the plot finds mention in only two lines of the mammoth charge sheet and provides no further detail at all.

Television channels also went overboard in dragging the name of Congress leader Digvijay Singh as part of the plot. They claimed that the charge sheet mentioned his involvement and his mobile phone number which was used in getting in touch with the Maoists.

While Pune Police has since then clarified that the charge sheet makes no mention of the Congress leader and that there were no plans to question him, a police officer has also been quoted in the media as saying that the phone number was mentioned because it was referred to by a number of activists in their correspondence.

Digvijay Singh has clarified that the phone number in question is the official phone given by the Rajya Sabha to a Member and that it is clearly mentioned in his profile on the Rajya Sabha’s website. The number was in public domain and anybody could have referred to the phone number. He also claimed that he has not used the phone for the past four years.

Surendra Gadling, himself a lawyer who is fighting his own case, told the special court, “All accusations against me are based on electronic data but we are not given that data. We are only given hard copies of the charge sheet. Police seized all electronic devices five months ago but still cannot give us copies. I am accepting this charge sheet under protest.” One of the defence lawyers said that if police had evidence, they would have filed the charge sheet on time by September.

Rahul Deshmukh, lawyer of Shoma Sen, said, “The whole case is based on alleged letters police found in laptops, hard discs and other electronic devices at the houses of the accused. What is the credibility of these letters that have no headers, no date and place? As per the charge sheet, Rona Wilson and Kishan Bose, another accused Maoist who is underground, planned to assassinate the Prime Minister. Suppose somebody did want to kill the Prime Minister, do you believe he will write it down explicitly and leave a trail? WiIl he or she not use code words?”

“The pattern is the same with several other accusations police have made like buying weapons from Manipur and Nepal to create chaos in India. Why would they write letters in such detail and in so many words if indeed they were involved in clandestine activities? Such evidence will not pass legal scrutiny,” Deshmukh added.

Another defence lawyer said on condition of anonymity, “Letters police have produced as evidences showing links with Maoists are already in public domain. Like Gautam Navlakha had taken an interview of Ganapathy, member of banned Maoist Party, is already in public domain. What does the interview prove? Many events and dates similarly don’t match.”

Rohan Nahar, another defence lawyer, said, “Sambhaji Bhide and Milind Ekbote, right wing activists are the ones who incited violence at Bhima Koregoan on January 1 this year. To protect them, the state government through Pune police have accused the activists who work for the downtrodden and the poor.”

Political observers believe the BJP government would like to keep this case alive till election time so as to deflect attention from their failure to deliver on promises.