India – Private hospitals making profits of up to 1,737% on drugs, consumables and diagnostics

NEW DELHI: An analysis of bills from four reputed private hospitals in Delhi and NCR by the National Pharmaceutical Pricing Authority (NPPA) has revealed that they are making profits of up to 1,737% on drugs, consumables and diagnostics and that these three accounts for about 46% of a patient’s bill.

The analysis, released on Tuesday, noted that “the major beneficiaries of profits in all these cases because of inflated MRPs have been hospitals rather than drugs and devices’ manufacturers”.

The NPPA noted that most drugs, devices and disposables were used and sold by the hospitals from their in-house pharmacies and patients didn’t have the choice of buying them from outside where prices could be lower. Institutional bulk purchase by private hospitals, in most cases by their own pharmacy, makes it easier for them to indulge in “profiteering on drugs and devices even without the need to violate the MRPs”, since these are already inflated, stated the NPPA.

According to the NPPA’s analysis, hospitals were effectively pushing the industry to print higher MRPs to get bulk supply orders from them. “This is a clear case of market distortion where manufacturers after accounting for their profits print inflated MRPs to meet the demands of a distorted trade channel without getting any benefits from this ‘artificial inflation’ and patients have to incur huge out-of-pocket expenditure in hospitalization cases,” stated the NPPA. 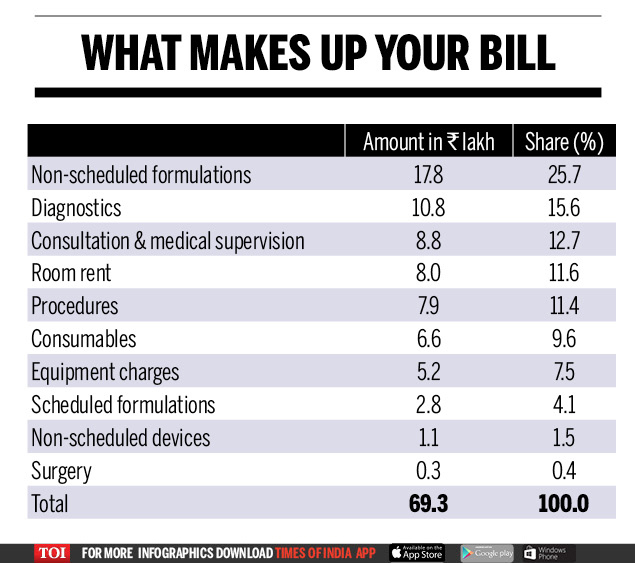 The expenditure on drugs, devices and diagnostics, constituting almost half the billed amount, is not part of the ‘estimate’ or ‘package’ (in case of implants) given by hospitals unlike procedures (about 11% of the bill) or room rent (12%), which are “the more visible components”, stated the NPPA.

The NPPA’s analysis came after complaints of overcharging by families of some patients who died from dengue+ and other ailments. Patients in all cases had complained that the initial estimate of expenditure got inflated by three to four times, NPPA said. It said the hospitals involved had requested anonymity. Sources said the request was honoured since these practices are widely prevalent.

The profit margins for the hospitals were highest on consumables, ranging from almost 350% to over 1,700%. On drugs that are not under price control, the margins ranged from about 160% to 1200%. Those on drugs under price control were between 115% and 360%.

Pointing to the huge margins on non-scheduled devices like catheters, canulas and syringes, the NPPA release said these were a case of “clearly a case of unethical profiteering in a failed market system”. 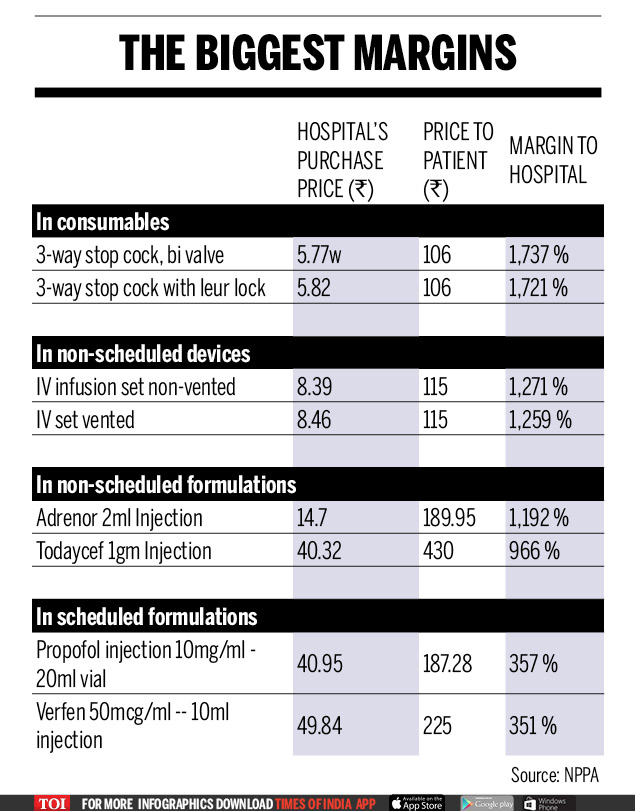 With the law not providing for controls or monitoring of the price of consumables, their share in bills was double that of scheduled drugs and constituted about one-tenth, stated the analysis. Since most consumables have not even been listed as drugs, “the NPPA can neither monitor the MRPs nor bring the disposables/consumables under price control even in public interest under extraordinary conditions,” the authority lamented.

Similarly, diagnostics services and other hospital charges are beyond the purview of NPPA and the central government and can be regulated only by state-specific laws, it pointed out. It noted that diagnostics constituted more than 15% of the total bill. In random checks by NPPA, it was found that the charges were invariably higher than in many independently run diagnostic centres.