Nayak has been seeking justice for the murder of Vinayak Baliga, a critic of hardline Hindutva, which has made him a target of fringe groups.
“They want to silence us by eliminating us”
Professor Nayak’s name was seventh in the hit list that was released on internet following the murders of Govind Pansare and Professor M M Kalburgi. He has been facing death threats and has been attacked in the past – the reason why he has also been given protection. Nayak recollects talking to the late activist-journalist Gauri Lankesh about her safety. He says, “Gauri had laughed it off by saying, nothing like that would happen. I do not know if she was remarking on the threat to her life or denying the protection.”
Facebook account 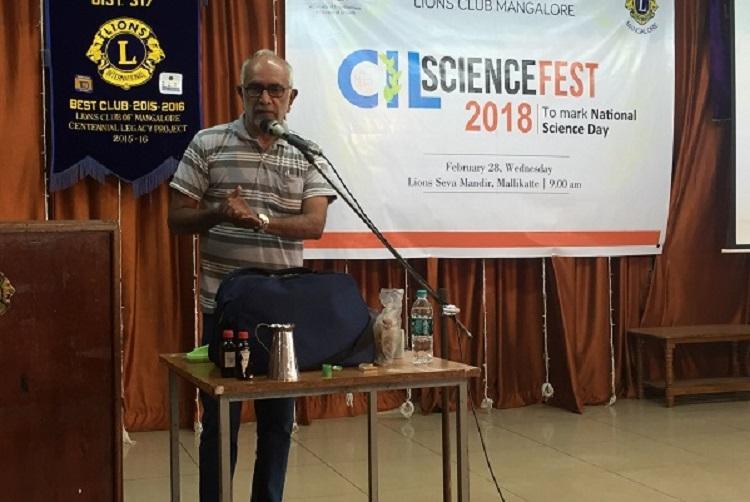 Noted Mangaluru-based rationalist Narendra Nayak had been at the forefront of the movement seeking justice, over the murder of Vinayak Baliga (2016), a critic of hardline Hindutva for the past two years.

This, coupled with his endeavour against religious extremism and superstitions, has made him the target of fringe groups. Now, another suspicious activity has alerted him.

On Tuesday, nine months after the murder of Gauri Lankesh, who was also a vocal critic of the Hindu right-wing, a suspicious man arrived at his doorstep when he was out of station.

Speaking to TNM, Nayak said, “A stranger came and made inquiries. Then, when the watchman questioned him, he gave evasive answers. When my wife’s security guard wanted to bring him in, he ran away.”

Since his wife Asha, (a noted advocate) also faces a life threat, the security person has been asked to check the identity card of every visitor.

The CCTV footage of the incident made him suspicious and approach the police on Thursday.

“I was out of station and yesterday I filed a complaint with the police saying that an incident like this should be investigated as first of all, a stranger comes, makes inquiries and then he runs away,” Nayak told TNM.

“Because they are so many incidents happening, I have every reason to believe that there is something fishy. That is why I have complained to the police and they will investigate if the person involved has any links,” he added.

Nayak says the first time he received such a threat was nearly three decades ago. He, along with several others, had moved the High Court of Karnataka challenging the grant to the land to a mosque at Mangalore Harbour. Such a grant, Nayak had argued, would open the floodgates for a number of such demands. He had obtained a stay order from the court, following which, he had received death threats and also was attacked on number of occasions. He has been provided a gunman by the police since July, 2016.

The president of Federation of Indian Rationalist Associations and a godman debunker, Nayak has earned enemies from among the superstitious and religious fanatics. They have been constantly plotting attacks on the rationalist. Writing about such attacks, he recollects one of such attacks in 1992:

“We had a miracle exposure program at Town Hall, Mangalore. It was our 125th program and my anti guru late B. Premanand had been invited too. It went on for a long time and sometime during the Q-A session, one person came and asked me whether there was bhoota(ghost). I said I have not seen so far. He then said in that case what is this? He started shivering and jumping around and tried to damage the sound system. I came down from the stage and asked him to come over. I gave him a tight slap and asked: where is it? He said I am ok now and ran off! After an hour or so, he came back with a mob who started attacking me and wanted me to say that I believe in God and one exists. I flatly refused, the police had to be called and the crowd was dispersed not before they threatened that no program of mine will be ever held in Mangalore again. Of course, hundreds of them have happened since and no one could stop them is another matter.”

The rationalist also noted that the latest attempts had started after the assassination of Narendra Dhabolkar, who was the vice president of Federation of Indian Rationalist Associations. Questioning the existence of god, ghosts and other supernatural powers is seen as a threat to the religious belief system. Rationalists, who invoke science to explain and debunk superstitions, are often attacked. Speaking about the reason behind attacks on him and rationalists in general, Nayak said:

“If it is an Abdullah or a Peter writing and speaking about these issues, they always can be dismissed by saying that they are Muslim and Christian. But if it is a Narendra or a Gauri, they (Hindu fundamentalists) cannot do that. We have been effective in presenting our point of view; and the fact that they are trying to eliminate us proves that we have been effective. So they think that they can silence us. That’s it. They want to silence us by eliminating us.”