India -Remembrance of 10th anniversary of killings in Kandhamal, Odisha 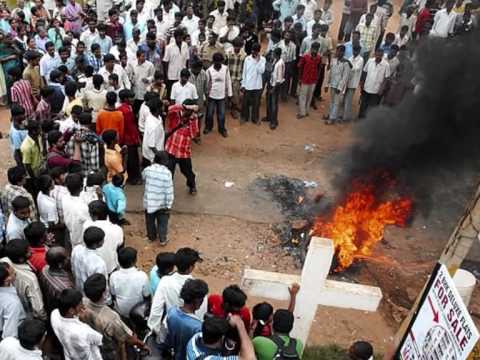 NEW DELHI: September 2, 2018 — Women wiped tears from their eyes and buried their weeping faces in their shawls as they recounted personal experiences of victimization in three different pogroms against religious minorities in India.

Six victims from three different pogroms spanning 34 years sat in solidarity on stage at the Constitution Club in New Delhi on August 25, the 10th anniversary of a 2008 pogrom against Christians in the Kandhamal district of India’s eastern state of Odisha. Social activist Harsh Mander, who has personally led teams to investigate violence in Odisha, moderated the panel which also included victims from the 1984 Sikh Genocide in Delhi and the 2013 Muzaffarnagar Pogrom in Uttar Pradesh.

After the victims spoke, human rights activist John Dayal explained, “These cases are separated by decades or years, separated by hundreds and thousands of kilometers, separated by ideologies perhaps, but with a common denominator — the killers can largely be said to belong to a right-wing ideology, even if the political party or the political patch they were wearing at any given time was different.” Following Dayal’s remarks, activist Vijayan MJ moderated a panel of six other speakers who, aside from discussing details of the three pogroms, focused on the identities and motivations of the perpetrators.

All six panelists corroborated Dayal’s claim that the Rashtriya Swayamsevak Sangh (RSS) and its affiliate, the Vishwa Hindu Parishad (VHP), organized or participated in the various pogroms. The RSS provides ideological support to India’s ruling Bharatiya Janata Party (BJP); a majority of the BJP’s Union Cabinet, including Prime Minister Narendra Modi, are RSS members. Along with the VHP and other outfits, the RSS and BJP are known collectively as the Sangh Parivar, a “Family of Organizations” which propagates an ideology of “Hindutva” that views non-Hindus as foreign to India.

Anirban Bhattacharya, a leader from Bhagat Singh Ambedkar Students Organisation, asked, “Why are we remembering Kandhamal after 10 years?” He explained, “One important thing about remembering Kandhamal, remembering Muzaffarnagar, remembering 1984 is to figure out where did we go wrong.” Linking the violence in Kandhamal to the 1999 murder of Australian missionary Graham Staines in another district of Odisha, he remarked, “I think that all of us heard about that brutal burning of the father and his family…. 1999, this happened, and it over-emboldened the RSS that we can be more aggressive from here on because, ultimately, there was nothing that was working against them.”

Highlighting the VHP’s program to “reconvert” tribals (also called Adivasis) from Christianity to Hinduism for the purpose of “cleansing the land of foreign religion,” Bhattacharya suggested “everyone knew” such activities would escalate to violence. Noting that “the warning signs were there,” he said the authorities “ignored those signs,” adding, “Even our so-called secular forces, they were not concerned with Hindutva terrorism — and let’s call it so.” Consequently, he argued, the human rights condition has deteriorated on a national scale. “That has ultimately led to this. Today, Graham Staines is happening all across the country.”

Paul Diwakar of the National Campaign for Dalit Human Rights (NCDHR) touched upon caste as a fundamental element of the violence. “This is not a fight among religions,” stated Diwakar. “This is a fight primarily among those communities who have been for too long pushed outside — even though they are human beings, even though they have contributed. They have tried their best, whether through business, whether through religious conversion, whether through education, whether through farming, to make their life better. And every time, wherever they have done, they have been hit.” Explaining that Dalits (formerly called Untouchables) and Adivasis often adopt non-Hindu religions in an attempt to escape caste, Diwakar concluded, “In 2008, it has become a wide attack against Christians primarily because, over the last three to four decades in that area, Dalits and some Adivasis had tried to take refuge through religious conversion to assert their dignity and their humanness…. So, while I think we recognize this as a religious, communal divide, we should also see that beneath the layer, it was primarily an assertion of intergenerational expulsion through caste oppression.”

Fr. Ajay Kumar Singh, a human rights activist from Kandhamal, warned that secularism in India is under attack through legislative means. “In Odisha, we cannot call ourselves a secular country since 1967, the year when Odisha introduced the first anti-conversion law,” said Kumar. “Under this law, if a person wants to change one’s religion, then that person’s priest or pastor must go to the police, and the police will come and verify [the legitimacy of the conversion]. That means you reduce every citizen as if they do not have a conscience. You make them infantile. That type of law is in ten states — in eight states in operation. Can you call it as a secular country?”

Shabnam Hashmi from Act Now for Harmony and Democracy (ANHAD) said the various incidents of violence are all part of “the whole design of converting India into a Hindu Rashtra (nation).” Hashmi warned that, today, “RSS is a lot more stronger. There is no doubt about the fact that they have this design of converting India into a Hindu Rashtra. They are working systematically on every plane possible. And they have gone very deep into the society, everywhere, including the civil society.” She connected her claims to her work pursuing justice for the victims of the 2002 Gujarat Genocide, saying, “When I started working in Gujarat, we thought that RSS was infiltrating every single aspect, but we thought they would not infiltrate the civil society. Gujarat shocked me very badly because people who were very established in the civil society, I realized they were not with us.” She concluded, “That fact is there, that RSS is infiltrating every sector, whether it is army, police, public life, cultural organizations, schools, education.”

Describing the extent to which Sangh Parivar outfits are proven perpetrators of violence against India’s minorities, Dayal said that, in 2008, “Manmohan Singh was in power in Delhi, but in Bhubaneswar [the capital of Odisha] it was Mr. Patnaik with almost a 50% coalition of the BJP. All the important ministries were with the BJP. It was only after the violence that Mr. Patnaik became the first Chief Minister in history to put on record of a legislative assembly that a communal violence — in this case, against Christians — was triggered, carried out, and sustained by the Sangh Parivar.”

Drawing a parallel between the killings of Christians in 2008 and the killings of Sikhs in 1984, Dayal concluded, “The assembly records of Odisha indict, on record, the RSS. If, in 1984, you say the State was complicit — and I say the State was complicit — here, the State was even more complicit.” Dayal added that the RSS is even implicated in the genocide of Sikhs, an incident which is usually laid only at the feet of the Indian National Congress. “Everybody thinks that the perpetrators of the 1984 violence were Congress lots, which of course they were, but for every Congress lot his companion was an RSS lot,” he said. “I’m an eyewitness. I’ve said many times that I’m very happy to depose before any Commission which would want to reinvestigate the ’84 riots and the role of all sorts of people.”

“None of the victims of any of these pogroms have seen any sort of true justice,” says Arvin Valmuci, a spokesperson for Organization for Minorities of India (OFMI). “Eyewitness testify that Members of Parliament led the 1984 genocide. Although the MPs are identified by name, all of them were punished with nothing less than political success. Similarly, in the 2002 genocide of Muslims in Gujarat, Chief Minister Modi was implicated by human rights groups, Gujarati police officers, and even convicted perpetrators, yet he was punished with election to the Prime Ministership of the country. India is trapped in a vicious cycle of impunity which compounds impunity.”

Praising the Delhi convention, Valmuci added, “We hope to see acts of solidarity like this repeated over and over again on ever grander scales, and we urge all the oppressed Mulnivasi people of India to unite in common cause to resist totalitarianism.”