The President of India and the Governors of the states enjoy similar powers. Those of the President are wider as they also apply to offences under the armed forces laws.

There is no exhaustive list of circumstances in which the President and the Governors exercise their powers and the Supreme Court has refused to interfere with or lay down guidelines relating to the exercise of this power.

A “mercy petition” is the document sent by or on behalf of a prisoner listing the reasons why the conviction or sentence should be commuted or suspended or why there should be a remission of the sentence. The grounds that may be raised include errors in evidence, factors indicating reformation, and poor mental or physical health. 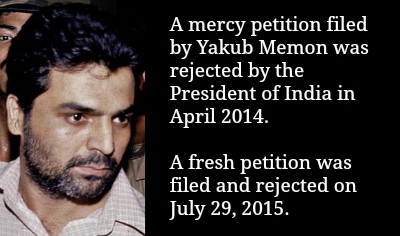 Usually, prisoners send mercy petitions through the jail to the home department of the relevant state government, which then forwards it to the governor of that state along with its recommendation. The governor then sends it back to the home department, which then forwards it to the Union Ministry of Home Affairs. The Ministry then gives its advice and sends it to the President of India. The President and the Governors are both bound by the advice of their council of ministers under Articles 74 and 163 respectively.

This process usually involves a large amount of correspondence between various government authorities to get the complete case records from courts and the police as well as records of the prisoner from the jail. While the Supreme Court has recommended that this process should be completed within three months, it has been known to take several years.

Yakub Memon’s case raised a question about whether a mercy petition sent by a prisoner’s brother could displace the prisoner’s own petition. Questions of how many mercy petitions can be filed and whether a fresh petition could be filed if there is a “change in circumstances” remain open.

The Code of Criminal Procedure, 1973 (“CrPC”) speaks of remissions, suspension, and commutation in Sections 432 to 435. These procedures operate at the level of the state or Union governments. Prison manuals guide the exercise of these powers. The powers under Articles 161 and 72 of the Constitution though, are at a higher plane and are not bound by the provisions of the CrPC or the state jail manuals.

Maru Ram’s case dealt with constitutional challenges to Section 433-A of the CrPC, which stipulates that persons sentenced to life imprisonment cannot avail of the benefit of remissions under the CrPC until they have served 14 years of imprisonment. The Supreme Court acceded to the legislative wisdom of fixing the minimum period to be served at 14 years. While rejecting the argument that Section 433-A confined the exercise of powers under Article 72 and 161 however, the Court observed that these provisions could at best be guideposts for the executive but could not operate as a bar to the exercise of mercy jurisdiction.

This means that despite a provision such as Section 433-A (“Restrictions on powers of remission or commutation in certain cases” or provisions in the Criminal Law (Amendment) Act, 2013 that prescribe the sentence of “imprisonment for the remainder of that person’s natural life”, the powers of applying to a governor and the President would remain available to a prisoner. Even in cases where the courts have awarded life without remission, it would be open to the prisoner to apply to the President and a governor for clemency.

The Supreme Court in Kehar Singh’s case has held that the President can go into the evidence of the case and even decide contrary to what the courts have held. A person convicted of assassinating Indira Gandhi had requested the President for an oral hearing of his mercy petition. The Supreme Court held that while no right to an oral hearing could exist in such a case, it refused to lay down guidelines for the exercise of powers under Article 72. It held that it would be open to the President to adopt whatever procedure was deemed appropriate. The Court however, did recognise that limited judicial review was available of the reasons for the President’s decision.

Separation of powers and secrecy

There are debates about the potential for the misuse of the mercy jurisdiction, but the powers are firmly rooted in our constitutional structure. While previously, mercy powers were seen as a private act of grace by the King, it is now a constitutional prerogative which must be exercised with a great deal of responsibility. The expectation is that high constitutional functionaries such as the Governors and President would exercise their powers appropriately.

So far, the judiciary has also maintained a position of non-interference except for recognising limited judicial review and hinting that Section 433-A may be used as a guidepost for when it is appropriate to exercise these powers in cases of life convicts. While the Constitution Bench in V. Sriharan’s case is likely to make some findings that may have a profound impact on mercy jurisprudence, it is unlikely that it could go so far as to curb the clemency powers of the President and the Governors.

Following the doctrine of separation of powers, the courts cannot direct these authorities to state the reasons for their decisions. A court cannot inquire into this ministerial advice and it is also protected from disclosure under the Right to Information Act.

Usually, only the mere fact of the rejection of a petition is communicated to a prisoner. They are not given access to any of the material or the reasons using which their petitions were accepted or rejected. While several Presidents in India’s history have indicated detailed reasons for allowing or rejecting mercy petitions, of late, the practice has been to not assign reasons in the file notings. The real reasons for the acceptance or rejection of a mercy petition are never known and there are serious concerns about the exercise of the clemency powers and the degree of influence wielded by the mood of the government of the time.

The need of the hour is to ensure that these decisions and the reasons behind them in all cases (whether involving the death sentence or otherwise) are made public rather than treated as closely guarded state secrets. Since the powers of the President and the Governor are vested in them by the Constitution, this may require a constitutional amendment.

(Nishant Gokhale and Lubhyathi Rangarajan are Associates at the Death Penalty Litigation Clinic, National Law University, Delhi. The clinic represented Shabnam and Saleem before the Supreme Court in Shabnam v. Union of India and was an intervenor in Yakub Memon’s case.)

Bereavement Leave: Workplaces should be sensitive when a woman miscarries
Bangalore-Protest Against Section 66A to protect #FOE #FOS @2Dec
Trinamool MP against media censorship
The ABC of Oppression, Privilege and Unlearning: An attempt to simplify social justice for the masse...