India – Rs 1.0 Lakh Crores For a Bullet Without Gunpowder, Train Without Passengers! 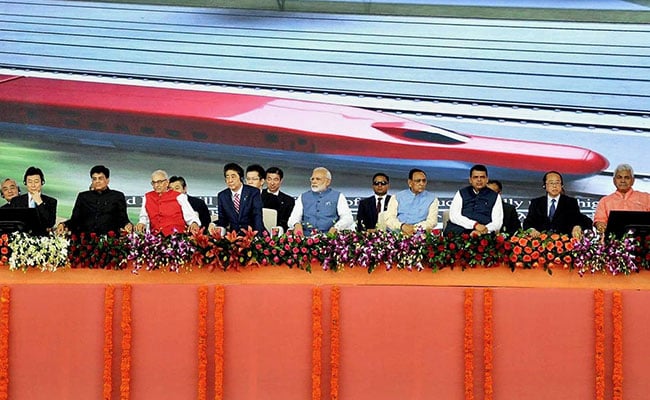 Rs 1.0 Lakh Crores For a Bullet Without Gunpowder, Train Without Passengers!

NEW DELHI: As the Indian government moves ahead with the massive bullet train project, an RTI query has revealed that over 40 percent of seats on all the trains on this sector go vacant, resulting in huge losses to the Western Railways.

Activist Anil Galgali filed the RTI. Galgali says that the RTI reply shows that in just the past one quarter, Western Railways has suffered a loss of a whopping Rs. 30 crore.

“The Indian government is over-enthusiastic and plans to spend more than Rs 1 lakh crore on the Bullet Train project, but it has not done its homework properly,” Galgali said. The activist added that the RTI reply raises huge questions about the viability of the bullet train.

Western Railways replied to the RTI with the admission that in the past three months, 40 percent seats were vacant on all trains plying the Mumbai-Ahmedabad route, and 44 percent were empty on the Ahmedabad-Mumbai sector.

According to the RTI, Western Railways’ chief commercial manager Manjeet Singh said that between July 1-September 30, there are 32 mail/express serving this sector with a total seating capacity of 735,630 seats on the Mumbai-Ahmedabad sector.

Railway officials confirm that new trains are being planned for the route given the seat vacancy. Further, even the most popular train — the Shatabdi Express — managed to sell only 50 percent of all seats on the route over the last three months.

The proposed project will cut the 500 km journey between Ahmedabad and Mumbai from eight hours to just over three hours.

The project has received widespread criticism, with many calling it an example of “misplaced priorities.” The Rs. 1.10 lakh crore investment would be better spent in improving the existing railway infrastructure — with stations and trains in bad condition — say several critics.

Jawed Usmani wrote a critical post highlighting the problems with the project. He said: “Japan has been pursuing the Mumbai-Ahmedabad bullet train project for a long time as it gives them an opportunity to market their over-priced technology and utilize their idle high speed train manufacturing capacity. They had pushed very hard for this project prior to the visit of Prime Minister Junichiro Koizumi to India in April 2005, and they had found surprisingly willing partners in the Railway Board and the MEA. RK Singh the then Chairman of the Railway Board and Rajiv Sikri, Secretary (East), MEA were enthusiastic supporters of the project. However, the matter required formal clearance of PMO before inclusion in the agenda of the foreign dignitary’s visit.

I was Joint Secretary to PM at that time, looking after economic sector issues, and was a key participant in meetings held in the PMO to discuss this issue. RK Singh and Sikri argued strongly in favor of the bullet train, essentially on the ground that India would benefit from transfer of technology. I opposed the concept, arguing that there are many other railway projects of higher priority and that investment of Rs. 50000 crores (the estimated cost in 2005) on the bullet train would be a complete misallocation of scarce resources.

The issue was clinched when I asked RK Singh whether he would have chosen to invest Rs. 50000 crores on the bullet train if the JICA loan funds were not available and the money was to be provided from the Railway budget. Surprisingly, he stated that under those circumstances, he would not choose to make the investment. It became clear immediately that the arguments in favor of the bullet train project were not based on genuine infrastructural needs of the Indian Railways but were driven by the fact that easy money was being provided by Japan for taking up this project.

At this stage in the meeting, Rakesh Mohan, who was the then Finance Secretary, made a very helpful observation. He stated that he would not go for the bullet train project even if the Japanese provide grant assistance instead of a loan, because based on international experience, in all likelihood the Mumbai-Ahmedabad bullet train will not meet operational costs and would need to be subsidized forever.

The Japanese push for the bullet train project did not succeed in the year 2005. The PMO did not agree to the proposal. The Railways identified a much more important infrastructure project – the Dedicated Freight Corridor Project (DFCP) between Delhi and Mumbai and between Delhi and Howrah, which was posed to the Japanese as a deliverable of PM Koizumi’s visit. MEA worked hard to achieve this outcome. Consequently, Prime Minister Koizumi made a statement during his visit to India in 2005 that the Japanese government will look into the possibility of supporting the DFCP by Japanese ODA loan. The Project took shape with Japan’s support, and when Prime Minister Manmohan Singh made a visit to Japan in October 2008, Japanese Prime Minister Taro Aso pledged that Japanese ODA Loan would be provided for the realization of the Western corridor of the Dedicated Freight Corridor Project.

The Western corridor of DFCP subsequently advanced to the “Delhi-Mumbai Industrial Corridor (DMIC) initiative”, which is a Japanese-Indian collaborative project for comprehensive infrastructure development to create India’s largest industrial belt zone by linking the industrial parks and harbors of the six states between Delhi and Mumbai in order to promote foreign export and direct investments. Under the DMIC initiative, plans are also being implemented to create industrial parks and logistics bases with well-developed infrastructures in the area 150 kilometers to either side of the Western Corridor.

The Eastern Corridor of the DFCP was later taken up with World Bank funding. A proposal forwarded by the UP government in 2013, to set up an industrial corridor along the Eastern Dedicated Freight Corridor on the lines of the DMIC, was also approved in principle by Prime Minister Manmohan Singh. Both the Western and Eastern Corridors of the DFCP are now nearing completion. The DMIC is under implementation and the Eastern Industrial Corridor is under planning and design

Thus, due to an appropriate decision taken by the PMO in the year 2005, India avoided being tricked into buying an over-priced bullet train toy. Instead, Japan signed on the dotted line to provide assistance for development of railway and industrial infrastructure in accordance with India’s needs and priorities.

Unfortunately, this time we have fallen into the age old development assistance trap. Howsoever soft its terms may be, the JICA loan has to be returned. It is a tied loan, forcing us to buy over-priced technology, for a project that services travelers between two cities only, over a track length of only 500 kilometers out of the total railway network of more than 63000 kilometers. The Indian railway has many more infrastructural needs of much higher priority, and Rs. 98000 crores should not be spent in trying to shift some passengers from Mumbai-Ahmedabad flights to the Mumbai-Ahmedabad bullet train.http://www.thecitizen.in/index.php/NewsDetail/index/2/12131/Rs-10-Lakh-Crores-For-a-Bullet-Without-Gunpowder-Train-Without-Passengers