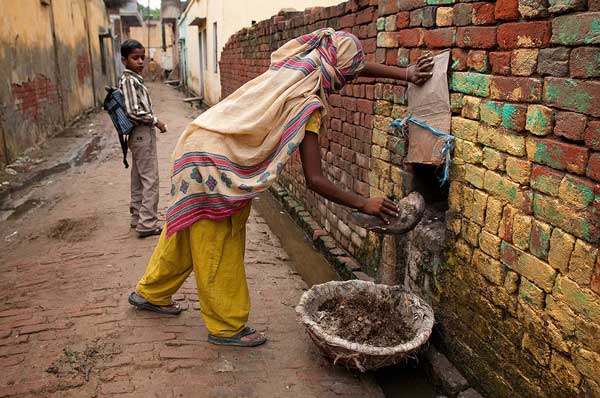 Safaikarmachari Kavulu Samithi-Karnataka, an organisation working towards complete eradication of the caste-based practice of manual scavenging in the State of Karnataka, expresses its outrage at the death of 5 workers – Umesh (22), Raja (22), Pankaj (26), Sarfaraj (19) and Vishal (20) – on account of being made to clean a Sewage Treatment Plant (STP) at DLF Capital Greens, a residential complex in Moti Nagar, West Delhi on September 9, 2018. These deaths, which are only the latest in a series of deaths of workers in Sewage Treatment Plants (STPs), were not accidents and were eminently preventable. Concerted action from Union and State governments is urgently required to prevent further loss of lives in STPs.

As environmental regulations under the The Water (Prevention and Control of Pollution) Act, 1974 across the country have mandated treatment of wastewater by large housing complexes, Sewage Treatment Plants (STPs) have proliferated across large cities in the country. While making these regulations, no thought has been given to the question of who is going to clean them. Several of these STPs are ill-designed and do not include adequate measures for operation and maintenance. The STP at DLF Capital Greens in Moti Nagar, for example, was either not designed or not maintained properly, otherwise it would not have had untreated human waste producing poisonous gases which asphyxiated the 5 workers. It did not even have stairs for workers to enter and exit. Many of the agencies contracted to operate and maintain these STPs employ casual workers to clean the tanks in violation of Section 7 of The Prohibition of Employment as Manual Scavengers and their Rehabilitation Act 2013, as was the case at DLF Capital Greens in Moti Nagar. Often these workers are Dalits as were some of the workers who died on September 9 at DLF Capital Greens in Moti Nagar. Because of these reasons, STPs are emerging as the new killing fields of manual scavenging after sewer lines, manholes and septic tanks. In the last two years in Benglauru itself, at least 8 workers have been killed in 4 incidents while cleaning STPs. These deaths are NOT accidents and could have been prevented if appropriate regulatory framework for STPs had been put in place by Union and State governments. Safaikarmachari Kavulu Samithi-Karnataka demands following urgent steps from Union and State governments:-

To bring justice to the families of the 5 workers, Safaikarmachari Kavulu Samithi-Karnataka demands following actions by the authorities:-

We sincerely hope that Union and State governments will wake up from their slumber now and take all steps including the one suggested above to ensure that no one else will be killed in STPs.