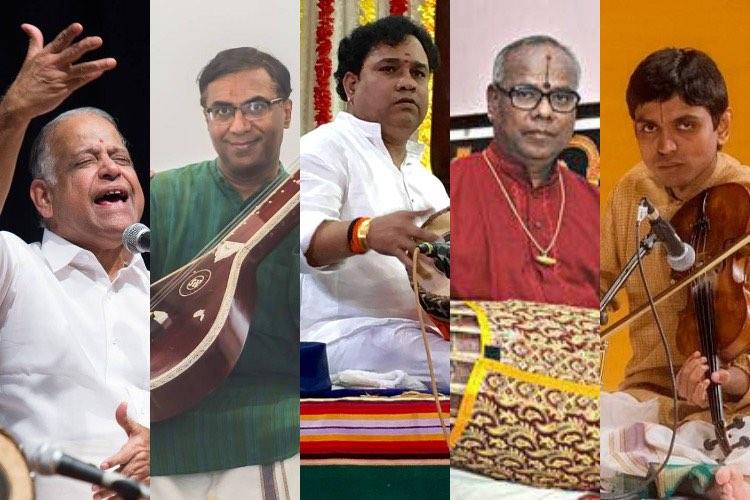 Following allegations of sexual misconduct and harassment by many, the Madras Music Academy has dropped seven Carnatic musicians from its list of performers for the annual December Margazhi festival

There’s discord in the Carnatic music world. The Madras Music Academy announced that it has dropped seven musicians from its list of performers for the Margazhi season (in December) following sexual harassment allegations against them. The seven artistes are N Ravikiran, OS Thyagarajan, Srimushnam V Raja Rao, Nagai Sriram, Mannargudi A Easwaran, Thiruvarur Vaidyanathan and R Ramesh. The musicians’ names surfaced on the list of alleged sexual harassers in the Carnatic music field compiled and put up on Twitter by singer Chinmayi as a part of the raging #MeToo movement. The names of those who have reported instances of sexual misconduct against them have been kept anonymous, though, their narratives have been made available online on many #MeToo forums.

While almost all the accused have come online and said they’re innocent, N Murali, President of Madras Music Academy, has said, “We realised that as an academy, we need to take a stand on the matter. We can’t be oblivious to what is happening around us. These are musicians who have been named as alleged sexual harassers. In some cases, a description of harassment has also been given. We have also spoken to unbiased members of this industry to arrive at a decision. I am not saying these people are guilty, but we have the right to decide who can perform and who can’t.”

However, echoes of sexual misconduct being rampant in the world of performing arts has been reverberating in the South, and recently dancer-actor Swarnamalya Ganesh even initiated a public consultation process for the advocacy of redressal. “We will make every sphere of performing arts from private dance schools, sabhas, organisations, government nodal agencies, ministry, artiste, universities, accountable. No matter your gender, power, status, age you will never intimidate us anymore. Taking this forward. If the performing artistes want to continue your radio silence, it’s fine. Coz this battle is fought for you too. Your children will live in a safer space from now on (sic),” she wrote on her Facebook page. Swarnamalya has also posted a document for and by young Carnatic musicians from across the world to share their stories if any, unafraid of the repercussions. This document, signed by stalwarts of the industry like TM Krishna, Sriram Parthasarathy, Ranjani and Gayatri and Bombay Jayashri, reads, “We ask for due process through civil society investigations into these allegations to hold these individuals accountable, and wholeheartedly welcome those who want to come forward and share their stories. At this juncture, we also encourage and request sabhas and cultural organisations all over the world to recognise this issue and put forward proactive structural measures to address such claims and prevent future incidents. We believe that this will make the Carnatic community safer for all.”

And though they have spoken to the media on this issue, when we reached out to OS Thyagarajan, he said, “I have no comments, sir” and cut the call. Mannargudi Eswaran, too, did not want to speak on either the Music Academy’s decision or the #MeToo allegations against him, and said, “No comments, please.” However, Chitravina player, Ravikiran told us, “Having been abused in my childhood, I have never laid a finger on anybody against their will. Being friendly, open-minded, nonjudgmental, progressive and liberal does not translate automatically into being sleazy or somebody who harasses others. I have respected every individual and never believed or indulged in objectification of women. I have been sensitive and respectful towards them.”

All of us knew sexual harassment was rampant: Swarnamalya Ganesh

“All of us within the circles know it’s been rampant for long. But don’t ask why no single person felt the need for outing the perpetrators before this. The #MeToo movement has emboldened many, but what I have sought is a part of a movement that is alive and kicking in almost all performing arts fields in various parts of the world. In the Carnatic circle, everyone knew what was happening Raya Sarkar’s list created a ripple and when Pappu Venugopal’s name (the then secretary of Madras Music Academy) made it to this list, the academy let him go quietly, without citing why they were letting him go. At that time, even if one person had come forth, this would be all in the open now, and perhaps systems would have been in place. But then, it was just one person, and everyone knew this would have adverse effect on their credibility.

WE HAVE THE EVIDENCE

No one comes up with names of the accused because of the force and intimidation used by the perpetrators. Every single person knew the underbelly was there, and it was dirty. But nobody as an individual was able to stand up to the repercussions. Today, as a group, we are standing up against all the alleged perpetrators. The truth is on our side, and yes, we are getting threatened, gas-lighted, maligned, victim-shamed, intimidated, and what not. But somewhere, now, they are also scared of what we are showing them as evidence when they reach out to us. Yes, we might not put it all up out there, but we have evidence. So, we are telling them all – sadly, many of them are personal friends and associates. And we are asking them to do the right thing, to take in their public image, and act for redressal.

THERE’S A LOT OF PEDOPHILIA

On my FB page, we have put up a long mail, which is a sort of way forward from this mess, and more importantly, prevention of such incidents in the future. It is based on various laws of the land, and done with legal help. We’ve talked about redressal mechanisms and deterrents can be put in place as guidelines for both individuals, and institutions. We have drafted the note along with the help of experts on laws dealing with child sexual abuse, as sadly, sometimes, the very nature of the teaching methodology we follow lends itself to pedophilia. There are a lot of minors involved, victims who’re still minors.”

We can’t be oblivious to what’s happening around us: N Murali

Explaining the rationale behind dropping these seven artistes alone while a few more names have been called out, N Murali, the president of Music Academy, says, “The primary reason is that we had finalised our programming for the December season in April-May, and these seven artistes figured on the list of performers. Secondly, the #MeToo movement that has been raging since the last few weeks, like a virtual storm. We can’t be oblivious to what’s happening around us. As a premiere institution, we cannot keep quiet either. We express solidarity with the victims, and we need to uphold the credibility and reputation of our institution. Many names have been called out. Purely naming someone wasn’t sufficient ground for us (to drop an artiste). If there are serious incidents, normally more than one, of a physical nature, then we took note of that and spoke to artistes who are unbiased in the same field and then arrived at these names.”

Murali emphasises that the Music Academy is not judging the dropped artistes guilty, but is only exercising its right to feature an artiste or not in their festival. “In excise of that right, we have dropped them from our December programme. It is not a legal process. We want to emphasise that these are allegations and we are not judging them guilty,” he stresses.

Ask him about the feeling among the music fraternity that the Academy seems to have acted under pressure and in haste, he says, “Nobody put any pressure on us. You can feel that way (acted too soon), but as far as we are concerned, we have done the right thing, and I feel we have taken a decision, which others might follow. The others are dragging their feet not knowing what to do. Also, this is in support of the women who have been suppressed all along and who have a voice to express now, and are emboldened to speak up, which was not the case earlier. We don’t think we have acted too soon. Because the season is round the corner, when else can we act?”

On whether the Academy will reinstate the artistes if the allegations are found to be false, Murali says, “Many of the incidents are in graphic detail and we don’t think they can be invented just like that. Secondly, we have also gone by their track record and then came to the conclusion (to drop them).”

Need to reflect why debates, discussions being barred in the name of COVID
Modi might be the only world leader whose Twitter use is more problematic than Trump’s
The KOODANKULAM EXPOSÉ- and the Right to Know
Denial of abortion is “torture,” says United Nations report #Vaw #reproductiverights