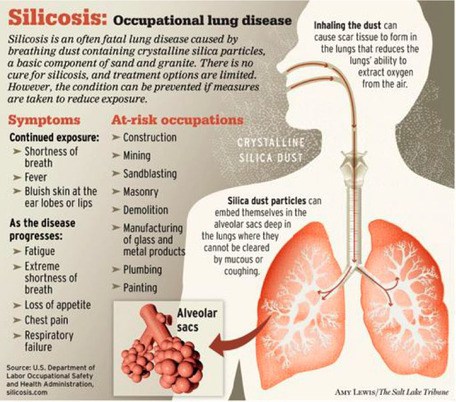 However, scientists at city-based National Institute of Occupational Health (NIOH) have found an answer to the scourge. They have identified a crucial Biomarker called club cell protein (CC16) in the blood, which will help early detection of silicosis and save these vulnerable people from contracting this irreversible occupational disease.

Biomarker is a parameter in the blood that changes its values with deposition of dust in the lung and flags the onset of lung fibrosis. This is perhaps for the first time in Asia that scientists have realised the importance of this particular protein.

Dr. Kamalesh Sarkar, director, NIOH Ahmedabad, said, “CC16 protein is situated in small bronchial tubes adjoining alveolus (tiny air sacs of lungs). When silica particles enter the lungs, they damage these cells, which, in response secrete CC16 protein. In a healthy person, the secretion remains on an average of 16 to 17 nanograms per mm of blood.”

NIOH scientists claim that CC16 proteins secretions decreases as silicosis aggravates thereby making it a reliable marker of the progression of the condition. “Based on these tests, patients can be warned early, asked to wear protective gear and subjected to periodic screening,” said an NIOH official.

The NIOH team of Dr Nibedita Naha, Dr Avinash Pagdhune and Dr. Jaseer Mohammed carried out tests on 110 individuals at an early and later stages of silicosis to establish the importance of CC16 levels in blood, urine or saliva. This has set the ball rolling for a nation-wide study to standardize CC16 protein values in normal as well as various categories of silica dust workers.

Earlier scientists had gone through voluminous research on other biomarkers like tumour necrosis factor (TNF) Alpha, blood copper level, ACE enzyme found in the lungs. However, none of these are specific to the lungs as they are secreted only when inflammation occurs in any part of the body.

NIOH scientists are hopeful that the lower value of CC16 compared to healthy subjects along with occupational history of exposure could be considered for initiation of silicosis.

Once in use, it will not only help control silicosis but also check the spread of silica-tuberculosis, which is an another neglected tropical disease.

At present, the International Labour Organisation (ILO) prescribes conventional X-rays, occupational exposure history and the standard lung function test (LFT) to confirm silicosis. Unfortunately, these tests confirm the disease only when patients are nearing the terminal stage. Activists involved with silicosis awareness programs say that NIOH’s CC16 Biomarker should be a reason for revising the present government policy on confirming silicosis as well as devising a health plan for such patients.

Mahesh Pandya, member, Paryavaran Mitra said, “If such a nation-wide study is conducted by NIOH, it will be of big boon for early detection of silicosis. The government should bring out an ordinance and ask employers of stone crushing or polishing units to include a half yearly and annual health plan for early detection based on CC16 secretion. The health and labour department should fund the NIOH project and ensure that the periodic check-up is available at all village or taluka level primary health centres.

Both, the labour and health ministries need to work jointly to modify the country’s existing legislation and make screening of workers in organized and unorganized sectors, mandatory for silicosis. Extensive awareness programmes for workers, family members, factory owners, social activists, trade union leaders are equally important to give periodic screening activities a push.