India slips in Global Innovation Index to 81st position from 76th in a year, worst among BRICS nations 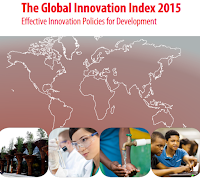 By Our Representative
A new report, prepared by the Cornell University, US, has rated India at 81st position in Global Innovation Index (GII) 2015, suggesting, despite a regime change in the country, things have failed to improve. The report says, “Over the last four years India has witnessed a reduction in its overall GII ranking, which dropped from 62nd place in 2011 to 76th in 2014.”
The only consolation for India is, its neighbours performs even worse – with Pakistan raking 132, Sri Lanka 85, and Bangladesh 129. However, its main “competitors”, members of the so-called BRICS club, of which India is also a part, have all outperformed India. Thus, China ranks 29th, Brazil 70th, South Africa 60th, and Russia 48th.
Prepared in partnership with the World Intellectual Property Organization (WIPO), consultants AT Kearney and the Confederation of Indian Industries (CII), among others, the nearly 450-page report notes that till 2008, “the policy regime in India has evolved to become favourable in terms of innovation, but since the economic slowdown in 2008—specifically after 2010—the performance of the Indian economy has remained somewhat unstable.”
Pointing out that “changing dynamics of the country’s political, educational, and business environment” has been a major reason for India’s downslide in GII, the report underlines, India has particularly found to be performing poorly in “input parameters” during the last four years. These parameters are “political stability, ease of starting a business, tertiary inbound mobility, and environmental performance”, it underlines.
“These findings also resonate with the general public’s perception that the government has been relatively inactive during this period in terms of making policy decisions. Among the reasons for this inactivity is the slowdown experienced in the overall economy, the country’s high inflation, and clamour over severe corruption charges against the incumbent government”, the report underlines.
“Weaknesses that are underscored in the GII occur in the area of ease of starting a business— a persistent matter of contention in India, which presents regulatory hurdles to entrepreneurs through a highly complex compliance regime and heavy bureaucratic interference”, the report says, adding, “Such government interference discourages entrepreneurs from effectively starting and running businesses”. 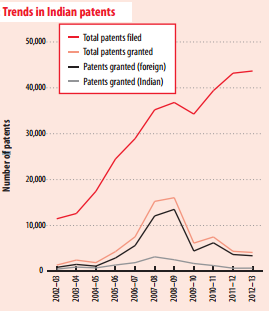 “India ranks poorly in terms of its ease of doing business parameters”, the report states, adding, “This will remain a major obstacle that India must address if it is to hasten its economic growth (in terms of its GDP) from its current level of 5–7% to 10% and above.”
Coming down heavily doing well on environmental front, the report states, “As a developing nation, India still holds a debate between the procurement of expensive, eco-friendly technology and the use of traditional, lowcost technologies that have a high carbon footprint. India’s dismal ranking (155th out of 176) in the 2014 Environmental Performance Index is evidence of the fact that the country has lacked efficient policy measures to tackle this issue.”
Then, the report states, “In India, a persistent contradiction exists between protecting intellectual rights for commercialization and profitmaking and catering to the social needs and obligations to the poor. Owing to this contradiction, policy and patent laws have been crafted to strike a balance between these two considerations. This has resulted in a relatively weaker intellectual property rights (IPR) regime than those of other developed nations.”
Another area of concern, the report states, is higher education. “India lacks an adequate number of higher education institutions to cater to its growing number of aspiring students”, it points out, adding, “The level of university-industry collaboration in India is also minuscule compared with that of other developed nations, and there is dearth of high-quality teachers in the education system.”
Then, the report states, there is a need for creating new jobs. “As the world economy becomes more volatile and India faces the adverse effects of this economic instability, it is essential for the government to stimulate job creation in the economy far more than usual by devising new methods”, the report underlines, adding, “This goal can be achieved through building a strong entrepreneurial ecosystem and incentivizing innovation-driven start-ups.”
http://www.counterview.net/2015/09/india-slips-in-global-innovation-index.html