Deaths due to heat waves in India are usually reported as class- and gender-neutral numbers, hiding the irony of global warming that those least responsible for it are affected the most by it. 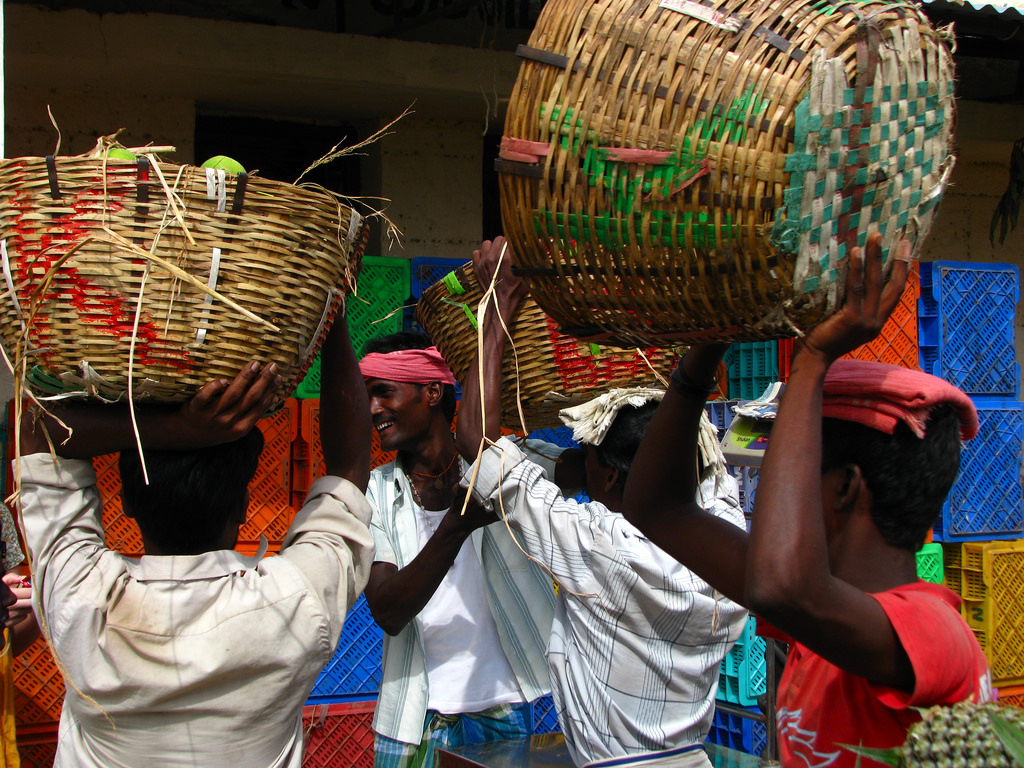 “The time has come,” the Walrus said,
“To talk of many things:
Of shoes, and ships, and sealing wax
Of cabbages and kings
And why the sea is boiling hot
And whether pigs have wings.”
– Lewis Carroll, The Walrus and the Carpenter, 1872

The seas aren’t exactly boiling hot, but we are trying our best. Over 90% of all the excess heat trapped by carbon dioxide, methane and other greenhouse gases since 1970 has gone into the oceans. This has happened largely because of the high capacity of water to absorb and retain heat.

The amount of overall heat energy trapped by greenhouse gases is jaw-dropping. Between 1971 and 2010, the IPCC’s latest Assessment Report tells us that Earth gained 274 million million billion joules. James Hansen, one of the world’s most renowned climate scientists, put these bewildering numbers a little more colourfully. The excess energy trapped since 2005, he said in a TED Talk a couple years ago, is “equivalent to exploding 400,000 Hiroshima atomic bombs per day, 365 days per year”. We’ve  trapped, since 1970, the energy equivalent of four Hiroshima bombs every second.

Given this enormous amount of excess heat being trapped in Earth’s climate systems, it’s hardly surprising that one obvious, and widely-accepted, manifestation of global warming has been an increase in the geographical area, frequency and duration of heat waves – such as we have been experiencing in many regions of India this year. Globally, there’s no one definition of a heat wave. In most towns in the US, for instance, the most common definition is temperatures touching 90º F (about 32º C) for a period of three consecutive days. In Denmark, a heat wave is declared if temperatures cross a pleasant 28º C across the half the country’s landmass for three days.

India’s thresholds are a little higher than Denmark’s. They vary given myriad geographies and ecosystems, but a heat wave is usually declared if the maximum temperature of a place rises about 4-6º C over its 1971-2000 average. A heat wave is also declared when any place touches 45º C irrespective of what its normal is, and 40º C if the monitoring station is in a coastal area, again irrespective of the norm (according to a paper by D.S. Pai, et al, published in Mausam, October 2013). A recent discussion in the journal Nature by P. Rohini, M Rajeevan and A.K. Srivastava, covering the half-century 1961-2013, reveals “a statistically significant increase in frequency, duration and maximum duration of heat waves over India”.

The Indian Meteorological Department also has a category called ‘severe heat wave’, which is declared when a place’s temperature soars 6-7º C over its normal. These have recently been observed globally. In a paper published in the Proceedings of the National Academy of Sciences in 2012, James Hansen and others showed that extreme spikes in temperature had spread massively over the world’s landmass. “Probably the most important change,” they wrote, “is the emergence of a new category of “extremely hot” summers … [These] practically did not exist in 1951-1980, but in the past several years these extreme anomalies have covered of the order of 10% of the [world’s] land area.” The paper by D.S. Pai and others also mentions a noticeable increase in severe heat waves in India, both in the number of days and the geographical area affected in the decade 2001-2010, as compared to the previous four decades.

Why are these occurring? Increased heat waves over India are partly caused by an increased warming of the Indian Ocean during the past half century, and a consequence of the incredible amount of heat energy oceans are absorbing. But ocean and climate systems are extremely complex. For instance, heat waves are also somewhat influenced by the El Niño oscillation, reversing ocean currents of the equatorial Pacific that influence weather systems the world over. In fact, more than one paper recently suggested that heat waves occur in many parts of India in the year following an El Niño year, such as in 2016 following the massive El Niño of last year and which is only now receding.

A question that comes to mind is: how is global warming, and so much heat being absorbed by the oceans, influencing the strength or frequency of El Niños? On this key question for India, the jury is still out. But the paper by P. Rohini, et al, states that “the consequences of these changes [in sea surface temperatures of the Indian Ocean and the tropical Pacific] include an increased frequency of extreme El Niños. With warming of the tropical Indian Ocean and increased frequency of extreme El Niño events, more frequent and long-lasting heat wave events are likely over the Indian sub-continent in [the] near future.”

Heat waves and the working poor

If one leaves aside the rarefied class of people that lives with air-conditioning 24/7, the social consequences of this on most others in India are grave and growing. If and how people cope with heat waves depends on their occupation and context. For instance, earlier this year, desilting work being done by rural wage-labourers as part of ‘Mission Kakatiya’ in Telangana came to a standstill. The Indian Express quoted one of the contractors as saying, “We lost 15-20 days due to the heat wave. We could not work and even the Irrigation Department told us to be careful.” In Orissa, the environmental journalist Richard Mahapatra has reported that schools, colleges and government offices shift their timings of work to opening early in the day and close by noon. This has significantly reduced the number of deaths from heat waves in Odisha (as reported by the magazine Down to Earth). In Delhi, schools that are due to close for summer holidays around May 15 invariably declare holidays early, to the joy of innumerable school kids.

Not all are so lucky. Urban areas are teeming with occupations that force people to work through the day in the most grim conditions, or outdoors. Industrial areas such as Wazirpur in North Delhi have innumerable tiny factories in which sheets of steel or tin are being flattened by first superheating them; the heat within these workplaces – where a working day of 12-14 hours with a half-hour break for lunch is commonplace – is intolerable on any Delhi summer’s day, let alone during a heat wave. Heat waves affect lakhs of other urban poor; those who work as security guards, an occupation whose numbers have exploded in most towns those selling stuff at street lights, and the homeless who have nowhere to hide. Construction workers, who are forced to do what is often back-breaking work through the heat, and often comprise women, form a high proportion of those killed in heat waves in some states. The profit-motive that drives capital along with the precarious nature of such work can literally take a deadly toll.

Deaths due to heat waves in India have been in the thousands – in the years 1998, 2002, 2003 and 2015 in particular. Numbers, which are how the deaths are usually reported, are class- and gender-neutral. It’s one of the grave ironies of global warming that those least responsible for it are affected the most by it. What’s more, the numbers are very likely underestimates. Heat stress affects different organs, whose failure may be understood and recorded as the immediate cause of death, when it is recorded at all. Say, heart failure among the elderly or malnourished, but the underlying cause is heat stress that the body has been unable to cope with. And underlying that is global warming, which plays itself out in complex ways. The tricky causal connections between global warming and death due to a heart attack of an infirm agricultural worker in interior Telangana we may never be able to tease out.

There’s another growing effect of heat waves whose causal connections with global warming may be tricky to establish in India. A recent landmark study linked a rise in chronic kidney disease (CKD) worldwide and global warming. “Epidemics of CKD consistent with heat stress nephropathy, are now occurring across the world,” it said. Richard Johnson, one of its lead authors, said, “A new kind of kidney disease, occurring throughout the world in hot areas, is linked with temperature and climate and may be one of the first epidemics due to global warming.” This has obvious and huge implications for India, given high background/‘normal’ summer temperatures, water stress and unequal access to water, increasing humidity, rising heat waves and spreading droughts.

Finally, we tend to forget or perhaps don’t appreciate that all human beings have an absolute physiological limit to cope with a combination of heat and humidity. That threshold is 35º C of wet-bulb temperature (wbt). In contrast with regular temperature, a layman’s way of thinking about or measuring wbt is by putting a wet cloth over the bulb end of a thermometer and allowing normal air to play over it. Our bodies generate heat due to metabolic processes even while at rest, which we usually shed by sweating or conduction. More than six hours in conditions over 35º C of wbt and our body loses its capacity to shed heat. Certain death from hyperthermia ensues, even in the shade and even for those supremely fit. Novak Djokovic would expire if he spent over six hours in these conditions doing nothing.

Most places in the world are still some distance from 35º C wbt; the highest currently is about 31º C wbt. But a paper published late last year reveals (paywall) that places in the Middle East – Dubai, Abu Dhabi and Doha among them – a region where lakhs of Indian migrants live and work, will exceed 35º C wbt later this century if the world does not move away from a business-as-usual carbon emissions scenario now. What will its consequences be in hot and humid places in India, where millions work outdoors in non-air-conditioned spaces? For the elderly, the ill, children or those malnourished, the fatal threshold is lower. As average temperatures rise, what is currently an extreme heat outlier becomes increasingly frequent and commonplace. But we are talking of something even more dire: large tracts of land in India where millions now live becoming inhabitable; going, for some periods in the year, beyond the coping capacity of human physiology.

That’s an added reason to tackle global warming with urgency, in addition to the many that are already known. If the world is unable to quickly, and sharply, lower its current emissions trajectory, it’s not the oysters in the Lewis Carroll poem but our proverbial goose that will be cooked.

Nagraj Adve is a member of the India Climate Justice collective. He works and writes on issues related to global warming.http://thewire.in/45375/the-social-consequences-of-indias-heat-waves-spell-doom-for-the-working-poor/

A Negative Stock Report About Indiabulls Led to an Analyst’s Arrest and a 2,000-Mile Odyssey
A Beginners Guide to Aadhaarspeak #UID #Biometrics
South Asians for Human Rights (SAHR) Condemns Exchange of Fire and Killings along the LoC #India #P...
PRESS RELEASE- Kidnapping of Student Leaders Mandeep Singh and Pradeep Singh by the Lawless AP Pol...