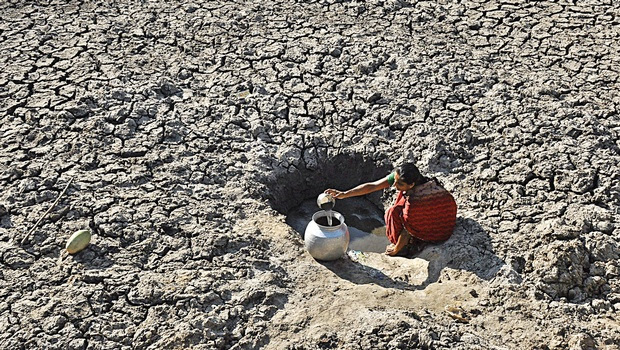 The coming elections to the Lok Sabha, crucial to the future of our democracy, our pluralism, our federalism, are only a few weeks away.

But something else, something urgent, something is already upon us. And something that is going to coincide with the elections. A drought.

The rains have failed us. Nothing new, one might say. True, except that the rains’ let down this time comes on top of an already low-rain and, in many places, no-rain ground situation. And the next nearest rains are six months away. The cruelly blue, cloudless skies over much of India, north, central, eastern and peninsular India, say it all. And there is no guarantee that June will see the onset of a normal monsoon.

What the sky says

Does anyone care? Does the political class? The Prime Minister and Chief Ministers are not unaware of the situation. They cannot be. The India Meteorological Department (IMD) has given them enough data. But when droughts and elections intersect, it is extremely uncomfortable to leaders. It is inconvenient to dwell on the skies’ tidings. Which government would like to tell farmers that suffering lies at their threshold? Who would like to tell them that water will be scarcer than before, that aquifers will plummet, crops wither, livestock go thirsty? Which government would, just weeks before the elections, tell us that with reservoirs drying up taps will sputter to a stop and that we may well be looking at water-rationing? The truth is, none of them will say that. This is where, as Amartya Sen has told us time and again, the media comes in, and comes in redemptively. It is India’s great good luck that public awareness, nudged and prodded by public discussions on meteorological data and media reportage, has kept droughts from deepening into famines in our country.

The IMD report on scant rains has received scant attention so far, with exceptions being provided by P. Sainath’s relentless warnings and observations of experts of the calibre and veracity of Ramchandra Sable, agro-meteorologist, and D.M. More, Secretary of the Second Maharashtra Irrigation Commission, reported in The Hindustan Times (January 6, 2019).

To turn to the facts. The actual deficit last monsoon was modest — barely 10%. But the post-monsoon rainfall (October to December, 2018) or PMR as it is called by meteorologists has registered a 44% deficit. This national average deficit conceals shortages in some regions where it is much higher. In Marathwada, according to the IMD, the deficit is 84%, in Vidarbha, 88%.ALSO READThis is not the future we want

Why should we worry, more than before, this time? For the reason that this low-rain and no-rain situation is going to aggravate the water crisis that we have brought upon ourselves without the ‘help’ of a dry sky. Years of policy-driven, corporate-driven water transfers from rural to urban, agriculture to industry, poor to rich and so on have made our country-side chronically water-scarce. Urban India does not realise this fast enough or well enough. It will, when there are power-outages and air-conditioners do not work! “By April-May,” Mr. Sainath said to me, “this drought could be tormenting millions in several States.” And that is when election-campaigning will be at its peak.

Though our major leaders deny it, Kaun Banega Pradhan Mantri — KBPM — is what occupies the high seat in their thinking today. They seem to be in aphasia if not amnesia about the massive waterlessness that has hit us already. If they see the parched ponds, the sharded earth, the leaf-shedding trees, panting crops, drooping livestock, they do not talk about it.ALSO READWater woes

That is how politics is. And yet that is not how politics should be and that is not how the rural Indian voter is going to allow politics to be. Not any more. And good for that voter that it be so. Anti-incumbency may take five years in electoral politics to mature into an ouster. It does not take more than one failed farm-season to turn to impatience and then to rage. No politician in office or aspiring to it today can ignore the drought. It is going to be the biggest and immediate test for the new governments in Karnataka, Rajasthan, Madhya Pradesh, Chhattisgarh. Somewhere in her hurt ego, a ‘relieved’ Vasundhara Raje must be glad she is not going to have to fight the drought. Likewise, Shivraj Singh Chouhan and Raman Singh. Not the Bharatiya Janata Party, not the National Democratic Alliance (NDA), not Narendra Modi but the drought is going to be the real challenge to the ‘collective opposition’ as it seeks to and could well manage to, oust the present regime.

Let there be no doubt that the Prime Minister of India 2019 will have to be India’s Drought Commissioner.

And let her or him face the challenge four-square and render a national service.

Time and money are short

There is a prequel to this.

For the NDA, time is short, money is not. For the Opposition, time is short, money shorter. What is short for both, equally, is credibility. It is critically short. The voter, especially the rural voter, has no illusions. A government either helps it overcome its life-and-death problems or does not. The ‘Delhi Government’ will be tested in 2019 for its credibility on many issues, among which certainly l’affaire Rafale is now top-of-the-list, followed by the Reserve Bank of India and the Central Bureau of Investigation mess-ups. But the elections in 2019 will test its credibility by what it does and says it will do for water-starved, food-short, livelihood-broken, rural India’s agrarian distress. And in States where the NDA is not in power — and now the States in which it is not exceeds the number of States in which it is — the rural voter will vote against whoever is in office unless the ‘government party’ makes drought relief, water-use, food security and massive earth-related programmes its absolute priority. In other words, unless it makes agrarian distress, now aggravated by the drought, its priority.ALSO READParched or polluted: on India’s water crisis

The failure of rains this time is so serious that ‘drought’ now means not just a farm crisis but a national crisis that will affect towns and cities no less than villages. ‘Agrarian crisis’ appears to urban India as something ‘out there’. No longer true. It is only a matter of time when the ‘taken-for-granted’ piped water supply will falter and when water cans will cost even more than they do, today.

Whoever becomes Prime Minister will do well to appoint a commission like the Farmers’ Commission, which Dr. M.S. Swaminathan headed, to advise him or her on how water scarce India, all of India, needs to face drought. And give that Commission just one month to complete its study, make its recommendations not just to government but to all Indians, to us, who have become so used to water-access imbalance, water-use lopsidedness, water prodigality in the midst of water poverty that we just do not care. And this time, not advisories or appeals but penalties will be needed.