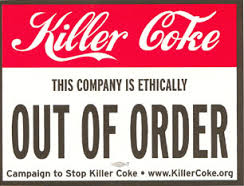 
New Delhi:  Eighteen village councils (panchayats) in the immediate vicinity of the Coca-Cola bottling plant in Mehdiganj in Varanasi district in India have come together to demand that the groundwater used by Coca-Cola be stopped immediately due to the growing water crisis in the area.

Panchayats, or village councils, are elected bodies at the most local level, villages, in India.

The village councils are located within a 5-km radius of the Coca-Cola plant and villagers have experienced water shortages soon after Coca-Cola began operations in 1999.  The area surrounding the bottling plant is largely agrarian, and relies on groundwater to meet most of its needs, including drinking, irrigation, cleaning and for livestock.

Coca-Cola also uses the same common groundwater source to meet its production needs, placing its groundwater use in direct competition with the community in an area running short of water.

The deteriorating groundwater conditions experienced by the communities are substantiated by government data that have confirmed sharp drops in groundwater level in the area.  The area’s groundwater was declared as “over-exploited” by the government just last year.  Over-exploited is the worst category possible and implies that more water is being extracted than being recharged, and many restrictions on the use of groundwater by the community and farmers are put into place.

In letters to the Uttar Pradesh Pollution Control Board, the state government agency that has been responsible for granting a license to Coca-Cola, the village council heads (sarpanch) note that it is not acceptable that Coca-Cola continues to extract groundwater for profit while everyone faces a water crisis in the area.  The letter also notes that children, women, farmers, the poor and livestock are affected the most from the growing water crisis.

The letters ask that the groundwater extraction by Coca-Cola be stopped immediately.

The village councils had also written a letter in April 2013 objecting to Coca-Cola’s plans to expand the bottling plant in Mehdiganj.  After a sustained international campaign to not allow Coca-Cola to expand, the government rejected Coca-Cola’s plans for expansion in August 2014.

The letter from the village councils in Varanasi comes at a time when the Indian government has brought forward new and more stringent regulations to regulate groundwater use by industries, and in particular, water intensive industries such as beverages, breweries and pulp and paper.  The move to strengthen groundwater regulations come largely as the result of pressure from activists as well as directions from the National Green Tribunal, India’s green court.

The new guidelines to regulate groundwater became effective on November 16, 2015, and a significant addition was to bring existing industries under the purview of the latest guidelines – a key demand of the India Resource Center as it has campaigned to end groundwater abuse by industries.

The eighteen Gram Panchayats and Sarpanchs who have signed letters include:

The Gram Panchyats are also joined in their demands by the Arajiline Block President, Shmt. Shakuntala Dewi, as well as the MLA, Shri Mahendra Singh Patel.

“Elected village council heads represent the voice of the people, and they are clear that Coca-Cola is not welcome in Mehdiganj.  It is time for Coca-Cola to pack up and leave,” said Amit Srivastava of the India Resource Center, an international campaigning organization.

“Coca-Cola paints a pretty picture of itself internationally as a responsible user of water but the reality in India is that it exploits groundwater at the expense of the poor, the women, children, farmers and livestock who have to live with less water because Coca-Cola mines groundwater in a water scarce area for profit,” Srivastava said.