Apex court not only needs to undo the grave error of Koushal versus Naz judgment of 2013, but also bring the country out of a majoritarian pit.

Indian judiciary works in strange ways. In a matter of nine years since 2009, we have seen the Delhi High Court strike down Section 377 of the Indian Penal Code in an emphatic and expansive judgment, exploding the horizons of sexual autonomy, individuality, diversity and personal liberty, only to be overturned in a most unconstitutional manner by the Supreme Court in 2013. The December 11, 2013 judgment, also known as the Koushal versus Naz Foundation, put the lid back on a deep majoritarian pit which condemned many, once again, to a life of quasi-criminality, of unlawful sex “against the order of nature”, forcing many to retreat into shells of closeted sexual otherness, a horrible place deprived of joyous self-expression that heterosexuals are allowed.

Those who had fused the personal with the political in this collective battle for liberty, dignity, equality and autonomy, many of them were given a rude jolt, not entirely out of step with the majoritarian miasma that was bubbling over. Many lived at odds with the law, with their everyday becoming a battle with a Victorian-era legal diktat encoded by the former subjugators, revolting against a Parliament that skirted the historic opportunity to frame a law decriminalising “sex against order of nature”, while a few legislators, like Shashi Tharoor, kept knocking at the incognito conscience of a lawmaking body devoid of its soul.

But the “pride marches” never stopped. Processions of love were carried out in many cities over the years. The sexual minorities, a strange nomenclature given the fluidity of sexuality, flowing from one to another like the very liquid of life, “asserted” themselves as “equals” — something puritanical homophobes like BJP MP Subramanian Swamy have always balked at. Orthodoxies from all quarters, from the Hindu religious bodies and trusts, to the Catholic Church, to Islamic bodies, were all united in their derision of difference. 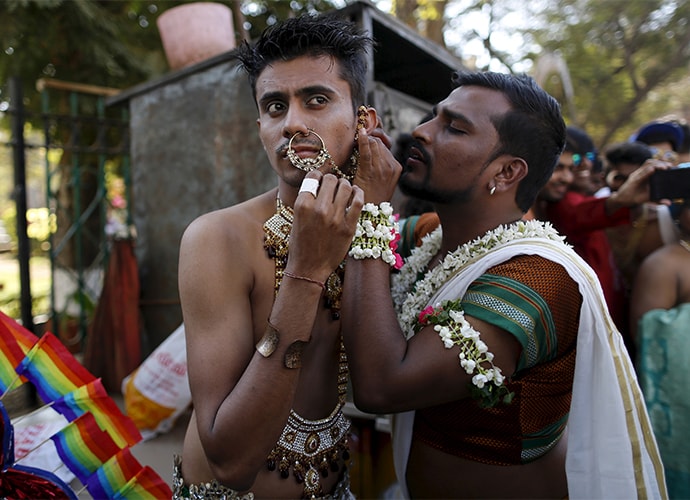 That sex can be various, sexual pleasure can be obtained without the heteronormative coda that many experience as a heavy iron fetter, that non-procreative sex is just as natural as any other, that orifices exist in the body only to be explored, that consenting human adults can kiss, penetrate, caress, touch, stroke, linger on, lavish upon, ravish, enjoy, be enjoyed, engage, have intercourse with, each other as they wished, any time, every time – this elementary life lesson eluded the gatekeepers of sexual dogma.

As “civilised” beings governed by law, humans at the receiving end of the legal stick have the hardest time. When personal liberty is construed to be at odds with social morality of a world, then deep inspections are required of the definition of morality that prefers to lock up individuals in silos of various predetermined identities – sexuality, nationality, religion, language, gender, race, caste, class. Any attempt to break free of these markers is construed as a challenge to the foundations of the society itself.

But what kind of a society feeds off the lifeblood of its individuals, specially those precious ones harbouring a little difference? That’s why constitutional morality was held as the supreme arbiter of such matters, and the Indian Constitution has been one stellar example of such a Bill of Rights that rose above petty sectarian morality, particularly the punitive instinct of the majoritarian morality, that cannot stand difference, that criminalises otherness, that betrays an entrenched insecurity about its idea of a nation, built of heterosexually reproducing child-bearing family units stuck together through shared prejudices.

It’s precisely that shared prejudices that constitutional morality sheds a light upon, illuminating the corners of the heart, soul and mind with more knowledge, wisdom, framing just and inclusive laws, eliminating discrimination stop by stop, day by day. Hence, the Supreme Court’s decision to relook the validity of the Koushal versus Naz judgment is a baby-step to undo a great judicial error, that reinstated a law that has no place in a society of equal legal subjects. That majoritarian morality cast a deathly blow to the daily revolutions on the ground the day the Supreme Court pronounced the Koushal judgment, to the decades-long struggle to rid sexual difference of many taboos, free it/them from the chokehold of “straightness”, another misnomer, was obvious in the shocked and stunned and screaming resistance that immediately followed.

Chief Justice Dipak Misra has rightly echoed the privacy judgment of August 24, 2017, also known as Justice Puttaswamy versus Union of India, which termed the Koushal judgment as an example of “minimisrationale”, or the most constrictive and restrictive interpretation of the laws and the Constitution, keeping social morality above the sacrosanct morality of the Constitution. While the privacy judgment, with its “downpour of rainbow rights”, ensured that the days of Koushal were indeed numbered, the legal tangles and the ways of the Indian judiciary kept everyone guessing. When would it be that the Supreme Court acknowledge a gross error on its own part, and in the process, make an effort to bring India out of its majoritarian cesspool?

The transgender judgment of 2014 (also known as NALSA judgment) by the Supreme Court gave a much broader, fluid definition of gender, that would stem only from one’s own personal experience of it, and need not conforming with biological determinants like primary and secondary sexual organs, or appearance. This severance of gender from the jails of biology, giving it the freedom bounce of its own individual, mutable, diversity-affirming idea of self, liberating it from the tyranny of the male-female binary, was a great step forward, and also an acknowledgement of the insanity of jurisprudential hara-kiri in 2013.

Chief Justice Misra therefore quotes at length from the NALSA judgment, and clearly stating that “gender identity is one of the most fundamental aspects of life”. That “sexual orientation refers to an individual’s enduring physical, romantic and/or emotional attraction to another person… Each person’s self-defined sexual orientation and gender identity is integral to their personality and is one of the most basic aspects of self-determination, dignity and freedom…” Evidently, this was at odds, heavily so, with the Koushal judgment, with its narrow understanding of the Constitution, effectively writing off the sexual liberty of a “miniscule minority” so that the majoritarian madness can carry on unthreatened, unchallenged, un-illuminated.

While in 2014 the Supreme Court also agreed to hear a “curative petition” challenging the 2013 Koushal judgment, presently, the CJI bench heard a direct challenge to the constitutional validity of Section 377 that punishes “unnatural sex”. This is the Navtaj Singh Johar versus Union India, and the chief counsel for the petitioner is once again senior advocate Aravind Datar, also an integral force behind the brilliant privacy judgment. As legal scholar Gautam Bhatia points out, whether the constitution bench would club the curative petition with the Navtej Singh Johar case, or would treat them separately, still isn’t clear.

Moreover, the gravitas of the curative petition, accepted only four times since it was introduced in 2002 as the last remedial measure by the Supreme Court, would also acknowledge the decades-long struggle that the Naz Foundation, as well as other LGBTQ organisations, many NGOs, blogs, legal platforms like Lawyers Collective, among others had put in. It would vindicate the social revolutions happening all along, while the judiciary often slumbered or lumbered behind, horribly out of step with international standards of rights and liberties enjoyed by citizens in most countries.

Whatever may be the case, no matter what’s the exact course the Supreme Court takes, the destination is clear: striking down Section 377, and curing – at least legally – India of its acute homophobia. It’s only then that the likes of Subramanian Swamy or Baba Ramdev would think again before broadcasting their bigotry before a herd of equally prejudiced people. The ludicrous irony of Swamy and Ramdev espousing the good Hindu culture while spewing homophobia couldn’t be more pronounced. One look at our texts and architecture and temples and love manuals, and the panoply of possibilities — sexual, bodily, of pleasure carnal and spiritual, of the intimate and the physical, of love and loving — opens up, infinite as the universe itself.

And even if the past didn’t bear a frank testimony to sexual multitudes, the present should have been enough to ensure no one is denied liberty, equality, dignity, autonomy, privacy and freedom on account of an aspect of their selfhood — sexuality. Our wonderful Constitution is a Magna Carta of such rights for all, only to read with “maximisrationale”, or the most expansive reading of the constitutional spirit, fusing love and law like it should, like it must.