By Anjana Vaswani and BalaSundaresan

The IITians, who created communication software for Stephen Hawking, on India’s great digital divide and what they’ve been doing to make technology more inclusive.

It was the early 1970s, probably around the time Cambridge physicist Stephen Hawking was working on his first book, The Large Scale Structure of Space-Time. Arun Mehta was studying electrical engineering at the Indian Institute of Technology in New Delhi, and elsewhere in the same university, Vickram Crishna, a textile engineering student, was busy running the music club. As they started hanging out together off-campus, Crishna and Mehta, who were both brought up in Mumbai, may have occasionally wondered if they’d still be friends decades later. What they probably didn’t envision was that, 30 years down the road, they’d be teaming up to enable Professsor Hawking, super-star scientist and best-selling author, to speak.

In January 2001, when Hawking visited India for the first time, Crishna and Mehta collaborated to create software that would allow the physicist, who suffered from Amyotrophic Lateral Sclerosis (ALS), to complete sentences with just a few keystrokes. “Each keystroke took a huge effort,” Crishna recalls, “and, he had only three: A click, no click, or a dwell (click and hold). We used that functionality to switch between various choices (of characters and words) on the screen; and with our software, he could go back and edit a paragraph, even a single word in it, without deleting the whole paragraph. The software he was using previously didn’t allow this, and that was a huge barrier to smooth conversation.”

Crishna noticed this first-hand in 2001, when his nephew, Neel Shearer, who was Hawking’s graduate assistant at the time, invited him to dine with Hawking after a soiree hosted by the British consulate. “I spent two hours chatting with Professor Hawking at dinner and discovered that the software he was using was very slow and troublesome.” Mehta says, “Also, its hardware was no longer being manufactured. He (Hawking) had two units, but if they broke down, he would have no voice left. He wanted a backup, and that’s where we came in.”

The solution they came up with — eLocutor — was later recognised, internationally, as one of the best pieces of software ever written, Crishna tells us. Mehta wrote an article about it for Beautiful Code, a publication which included the stories of master coders such as Ronald Mak, who was part of the team that developed NASA’s Mars Exploration Rover and Princeton University Professor Brian Kernighan, who co-authored the programming languages AWK and AMPL.

Though people rarely write to software developers, Mehta has received at least a couple of heart-warming messages. “One person with a similar disability [to Hawking] would click his teeth to operate the software. After he passed away, his daughter sent us an email to thank us.”

When they realised the eLocutor was well suited for non-government organisations, Crishna and Mehta started the Bidirectional Access Promotion Society (BAPSI). Launched in 2008, the society develops software for persons with disabilities, conducts workshops and works to influence policy in this sector. Crishna lives in Mumbai’s Pali Hill and Mehta in New Delhi’s Lajpat Nagar, but geography is no impediment to their collaboration. Government policies proved to be another matter.

“Arun and I started working together in the early 2000s,” Crishna says. “Arun had been the president of Amnesty and had seen that a lot of work needed to be done in the area of rural communications. We felt that the cheapest way to build rural communication was with FM radio and that it could help break the barriers between villages and foster a sense of community. But the government was absolutely against rural communications — it has always been. You cannot control people unless you keep them separate.” Crishna has written for leading business magazines, authored books on the business of information technology and management and, at different times, has worked as an industrial designer, an educator and a corporate strategist.

“The policy is shaped in such a way that self-help groups don’t have a chance to get started,” Crishna says. “We built the first community radio station in Andhra Pradesh in 2002. But despite the fact that we had state government backing, the centre did not want it.”

More recently, Crishna has been a crusader for the right to privacy. The subject of the Aadhaar card incites him immediately. “It’s not science, but scientific superstition that biometrics are unique. Science has, in fact, shown that biometrics don’t work, except where it involves very small populations (such as employees of a private company) because the exceptions are manageable.”

Crishna explains that in order to accommodate everyone — labourers, agriculturists and the elderly, for instance, whose fingerprints may not register clearly — the government would have to authorise human beings to make exceptions. “And, isn’t that an invitation to corruption? Wasn’t that the problem with the ration card scheme in the first place?”

For all that angst, both Crishna and Mehta, who used to teach computer science and engineering at Sharda University but now works as a consultant, remain charged up about exploring areas in which they can make a difference.

Mehta says, “To teach a blind person, the educator doesn’t need new skills. She or he may need an assistant to read out what’s on the board. But to teach the deaf, teachers need to know sign language. Consequently, this demographic gets left behind.” Mehta, who has been teaching programming to the blind, is now looking forward to teaching programming to the deaf, “so that they can exploit artificial intelligence, in particular voice-to-text technology.” Highlighting that these conditions could affect any of us, Crishna says, “Remember, it’s not about ‘them’ but about ‘us’.”

The sentence pretty much sums up the way Mehta and Crishna feel about public policy too. 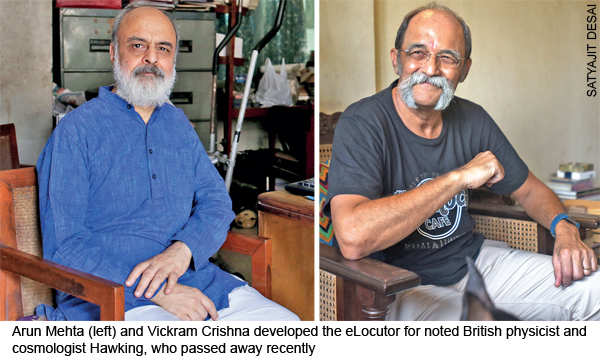