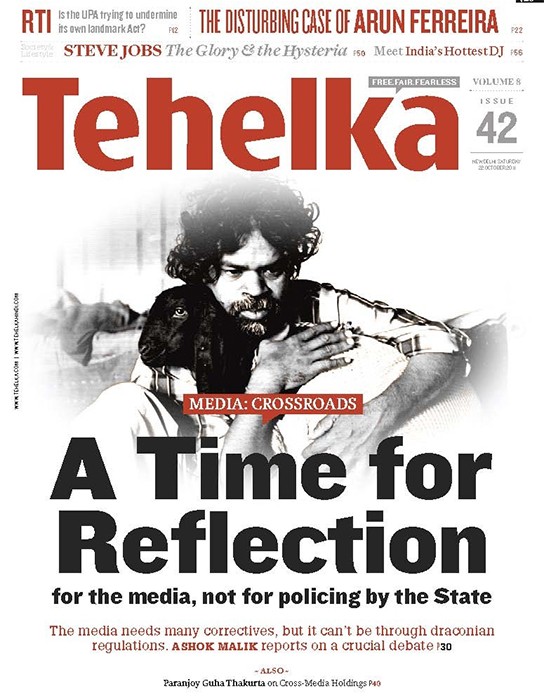 Amit Sengupta was one of the editors at ‘Tehelka’, when it was still called the ‘People’s Paper’. In a heart-breaking account he narrates the fall of the magazine from the highest pedestals of soulful journalism into the shallow depths of corporate sponsored, self-glorifying and pompous reportage. With the latest incident of sexual assault by its Editor-in-Chief Tarun Tejpal, the mirror has finally cracked…

Like those slick, spoofy movies about con artists who start believing that that they are actually artists and seem to completely forget that they are basically con-guys, or like the hugely talented painters of fake paintings who start believing that the fake ones are really the original ones, the Tehelka bosses too have suddenly rediscovered their stunning originalities and self righteous narcissism in the cracked mirror of our times. So much so, they might still believe that it is the mirror that is cracked and hence it is finally the fault of the mirror. The mirror can go get damned, and who cares if it cracks many times more and falls with a jarring sound in a room replete with silence?

Indeed, the fall was always there, only that there was too much sound and fury, while the silences of white spaces in the colourful supplement of the holy ghost always seem to get buried and crushed. Routinely, there was a splash of addictive and repetitive celebration of megalomania, ritualistically glorified by its photogenic Managing Editor, perhaps like the point-size of the by-line with a mug shot becoming larger than the headline of a story or column. Do more readers read you if they see your mug shot? It’s like saying that China is a multi-party democracy. It’s like writing with shameless pomposity that M.F. Hussain had once asked me to write his autobiography, and that too after he had died in exile.

The cracked mirror? They never really cared. Like original painters of fake paintings, they turned public interest journalism into an art form. Perhaps Shiv Khera can start teaching marketing executives in five star hotels, with a hefty price of course, on how brand Tehelka became a commodity and victim of its own fake longings and mirror images, outsourcing and marketing public interest into a ‘buy one get three’ brand with a lot of dubious sponsorships and mining mafias thrown in for both spice and spirituality. In this Stinkfest everything smells of Old Spice, which Tarun Tejpal loved so much, so much so, there was always that lovely red plastic bottle next to him on his desk at GK II in Delhi.

In the end, their pockets only got deeper and deeper, and it did not matter if Soni Sori was jailed and condemned on fake charges, her body violated and brutalised by the Chhattisgarh repressive state apparatus led by the BJP. All that mattered was Shoma Chaudhary’s eternally flowery prose of elevated self righteous morality, even while the company (Essar) officials who were alleged to have paid her as an intermediary for the Maoists were all out there flaunting their muscles, as free as freedom, honourable citizens of a fat cat millionaire mining cartel, laughing their way to the bank. The Tehelka incestuous leadership too seemed to be laughing at our faces even as they lined their public interest journalism with big sponsorships and funding by dubious companies with impeccably shady track records, such as Essar in Chhattisgarh or the mining mafia in Goa.

Perhaps Shiv Khera can start teaching marketing executives in five star hotels, with a hefty price of course, on how brand Tehelka became a commodity and victim of its own fake longings and mirror images, outsourcing and marketing public interest into a ‘buy one get three’ brand with a lot of dubious sponsorships and mining mafias thrown in for both spice and spirituality.

Eat. Love. Pray and make hay. For them the sun was always shining.  Xerox another fake painting. Make Love. Make evangelism. Become Jesus Christ on a crucifix. Make big money. Sell your soul. Sell your sob story. Sell your high end fake ethics. Buy big cars. Celebrate big property. Hoist your pseudo revolutionary flag on the republic of chicken. Remember Tarun’s inaugural speech at the last Stinkfest in Goa? So whatever happens when all the chickens come home to roost?

The decline started long ago, even when a group of talented, committed, sensitive journalists, many of whom left cushy jobs to choose the rough and passion of the zigzag by-lane, precisely to create a parallel cinema of the ossified, fossilised, corporatised, stagnating, soul less journalism of the mainstream big media. This ‘alternative-mainstream’ defied the tyranny of the mediocrity, broke all the barriers of stasis and conformism, challenged all the clichés of establishment journalism, and pushed the threshold of professional excellence, hard-nosed journalism and deep sensitivity. They changed the rules of objective and subjective coverage of both bitter realism and the realism of hope. Where else could you have, week after week, pictures and stories splashed in full pages on the rights of the cyclists on the roads of Delhi and street hawkers across all metros in India, or multiple stories of the Bhopal gas victims and women of the Narmada Valley, or Dalit writers writing their autobiographies, or face to face with underground Maoists? Or, how the Modi regime tried to buy off Zaheera Sheikh, or why journalism should stand for secular pluralism at all cost.

This was a refreshing stream of consciousness which turned the entire media dialectic upside down and rediscovered the rational kernel of pulsating idealism in journalism without compromising on high professional standards. Small is beautiful, but small can also change the world.

It was collective stream of consciousness, true. It was heady and great. Tears, blood and sweat, as Tarun wrote in his fake atonement letter. I never thought that a great and original writer and editor like Tarun too would resort to such predictable clichés. If there were tears, blood and sweat, surely, it belonged to him as much to all of us, across the hierarchy, even while we, the captains of the ship, walked upon the waters holding the hands of all the young sailors, like sensuous sleepwalkers in an infinite dream sequence of a fantastic, impossible, beautiful rainbow coalition.

That dream now lies shattered, broken into many pieces, and not even the sound of the broken glass can be heard. The cracked mirror has suddenly become one-dimensional. There is neither image, nor sound. The decline of the self and the soul which started long ago, the fall of word, space and text, the apocalypse of idealism, seemed to have moved into another time and space. In this time and in this space, it is humid, dingy and shallow, all the windows are tightly shut, the doors of perception are like prisons of penance, and the dream is forever dead.

Truly, I don’t want to join the lynch mob. I don’t want to become the hangman. I don’t want to die in my sleep. But my heart too is broken. My mirror too has cracked. And the dream I see now, has neither colour nor feeling. It is a dead dream. Like a scream in abject silence.

So, I remind myself of an old slogan. I tell myself that hope and despair are the same thing, like pessimism and optimism. That dream and wakefulness move in synthesis. There is no catharsis. No anti-catharsis. They are all the same. Tehelka is dead. Long live Tehelka.