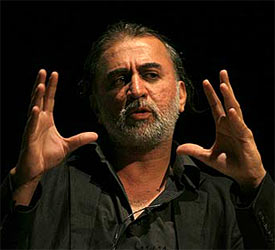 What gives Tarun Tejpal the right to decide his punishment, asks A Woman In Today‘s India.

Tarun Tejpal has made one thing amply clear… It does not matter how brilliant you are, it does not matter how hard you have worked to establish yourself — when you are in the position of power, you will let slip the darker aspects of your character because you think you can hide it behind your achievements.

You will test the power you wield, because you feel you can get away with it. You will abuse — in subtle ways, and openly — those who work under you, simply because you can.

And that is exactly what Mr Tarun Tejpal has done.

I’m not sure what riles me more — what he did or what he terms as his ‘atonement’ and ‘apology’; they seem like salt that is deliberately being strewn on a wound that is raw, throbbing, bleeding and hurting.

Here is the second paragraph from his letter:

‘A bad lapse of judgment, an awful misreading of the situation, have led to an unfortunate incident that rails against all we believe in and fight for.’

A bad lapse of judgement?

An awful misreading of the situation?

How do such things actually occur, Mr Tejpal?

How does a man of your intelligence term trying to extract sexual favours, or forcing yourself sexually on somebody, as a bad lapse of judgement?

In case you are still confused, let me clarify. Sexual harassment does not mean penetrative sex — that is rape. You can use words — an innuendo-laden conversation or statement — to sexually harass someone.

You can touch someone inappropriately, against their will.

You can make life difficult for them if they don’t accept, or respond, to your overtures.

That, Mr Tejpal, is what you did.

Here’s another easy of finding out whether you were actually prey to bad judgement — would you have behaved the same way towards a male colleague? Of course not! Which means you knew exactly what you were doing.

You were sexually harassing someone. A crime that you are now casually dismissing as ‘a bad lapse of judgement on your part’.

Now, let’s talk about ‘an awful misreading of the situation’. The journalist — I refuse to call her victim — in this equation may have not known how to respond.

Maybe, she had great respect for you as a journalist.

Maybe, she was just nervous because you were her boss.

So, maybe, she behaved as she would towards another senior colleague, a colleague who was a well-known, and well-thought of name in the profession, someone she was thrilled to work with and learn from.

More to the point, how did you misread your own intention towards her? Was your intention that of an avuncular senior interested in guiding your junior colleague?

In such cases, Mr Tejpal, is an ‘unconditional apology’ enough?

Would you be willing to accept an ‘unconditional apology’ from a politician you were investigating who had committed a similar crime?

Would you be satisfied if he ‘recused himself for six months’?

Would you, in all honestly, not call for punishment commensurate with the crime?

Does six months right the wrong you have done?

If this had happened to someone else, your organisation would be breathing fire and brimstone. And rightly so.

Why, then, have the rules been changed for you?

And finally, let’s not talk about the letter you wrote to your senior colleague, Shoma Chaudhury,

It is — do excuse my language — a self-aggrandising piece of crap!

It’s an advertisement that aims to highlight what a great man Tarun Tejpal is.

As for Ms Chaudhury — a few questions…

What if the female journalist was your sister?

What if she was you?

A Woman In Today’s India