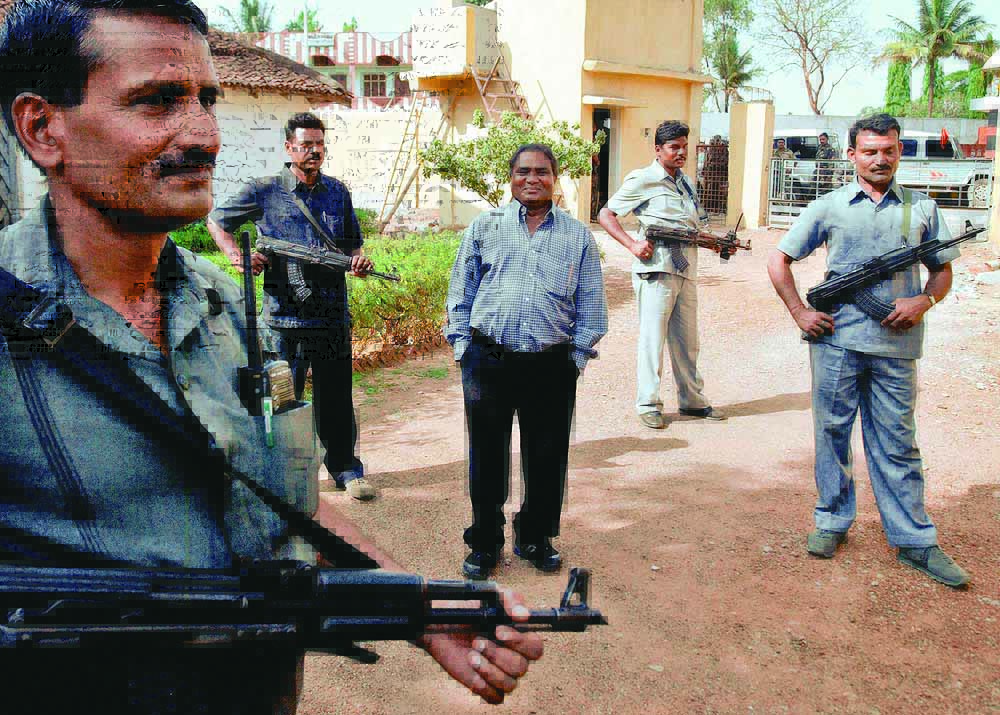 PTI
Target of reprisal The late Mahendra Karma, with guards
OPINION
The Bloodstained Karmic Cycle
To end the Maoist conflict, look to Peru and Guatemala
NANDINI SUNDAR in Outlook

Any keen observer of Chhattisgarh could have foreseen Saturday’s deadly Maoist attack at Jeeram Ghat in Bastar, though not perhaps its magnitude. Mahendra Karma’s death was long expected, though politicians like him who flirt with the dark side usually have enough security to keep them safe. With a string of killings of Maoist leaders under its belt, the security establishment thought the Maoists could be written off. However, like insurgents elsewhere, the Maoists scaled back only to strike hard.

Calls for more concerted military action ignore what has actually been happening. In fact, in recent months, the security forces have ratcheted up operations, densely carpeting Maoist strongholds with CRPF camps. On the 46 km stretch between Dornapal and Chintalnar, there are now seven camps, with the latest two, Burkapal and Minpa, having come up in the last fortnight. Overnight, large stretches of forest were cleared in Burkapal, for a helipad on one side and a CRPF camp on the other, and the question of forest clearances for this, or any other security installation, is never even seen as an issue. The biodiverse forests of Bastar—which are national treasures—have been one of the biggest casualties of this war, which rages across trees, roads, transformers, schools and the bodies of men, women and little children.

Sceptical villagers argue that rather than reducing hostilities, the presence of the camps will mean constant skirmishes between the forces and the Maoists, following which the forces will take it out on them. They report that security forces steal chickens from their homes when they are out in the fields; and indeed, with camps close by, even going out to defecate, cultivate or collect fuel wood becomes a hazard, especially for women. In Chintagufa, where several buses are parked to ferry security personnel back and forth, the forces have taken over the primary healthcare centre and the school. The Supreme Court’s orders on keeping off schools mean nothing to them.

Simplistic morality plays may be good for the trps, but will not address the real issues. The Maoist ambush came bar­ely a week after an equally terrible attack by the security forces, again during an area domination exercise, on the villagers of Edesmetta in Bijapur, who were celebrating Beeja Pandum, the seed sowing festival. Eight villagers, including four children, were killed, while severely injured villagers were given medical aid only a day later after local media coverage. The Beeja Pandum is one of the most important festivals of the adivasi calendar. The only glimpse that non-adivasis get is when they are stopped at roadside blocks placed by women and children, and they assume it is just for some easy money. But the ritual significance is that anyone crossing the village during Beeja Pandum must be fined for taking the seed away with them. The equivalent of what happened there would be the police opening fire on a garba dance during Navratri in Ahmedabad, saying the presence of so many people at one place was suspicious. Yet, there has been little national outrage around Edesmetta. For once, the government has promised compensation, but as one CRPF jawan said about the 2010 killing of 76 CRPF personnel, “Nothing can recompense the loss of a loved one.” The adivasis have loved ones too. Unlike the CRPF, they did not even sign up to fight. If what happened in Edesmetta can be dismissed as “collateral damage”, then why not apply the same logic to Saturday’s ambush, where Mahendra Karma was the main target? This is, after all, a war. But once we dismiss any citizen, whether a Congress pradesh president or a Gond child, as expendable, we are on a slippery path. In particular, a democracy that holds this stand loses its raison d’etre.

As in Tadmetla March 2011 (where security forces burnt 300 homes, raped and killed), Sarkeguda June 2012 (where they shot dead 17 villagers during their Beeja Pandum last year) and Edesmetta 2013, the Chhattisgarh government has ordered a judicial inquiry into the Jeeram Ghat ambush. But since the Congress knows well what this means, they have preferred to enlist the NIA. Given a list of 537 killings by Salwa Judum and security forces, the state government has ordered magisterial inquiries into eight cases since 2008, of which seven are still pending!

The Chhattisgarh police claims it need SPOs for intelligence gathering, refusing to disband them as the Supreme Court ordered. But what kind of intelligence are they getting if they claim Edesmetta was a Maoist gathering, and could not predict the Jeeram ambush? Instead, the fortification of SPOs with better guns and more money as the renamed ‘Armed Auxiliary Forces’ only increases alienation.

Even if they support massive human rights violations, politicians are not combatants. The same is true for unarmed villagers who may support the Maoists ideologically. An attack on party leaders engaged in electoral rallies must be strongly condemned, and the Maoist’s expanding hit list is truly reprehensible. However, it is only partially true to say that what happened is an attack on democracy. In a democracy, someone like Karma would have been jailed long ago. Even when confronted with evidence of his personal involvement in the Salwa Judum atrocities, quite apart from a CBI FIR for his role in a major tree-felling scam, the Congress chose to retain Karma in the party. And despite declaring Naxalism the country’s gravest security threat, never once has the prime minister felt the need to visit the area himself to find out why people support them, or console grieving adivasis.

Under the Constitution of India, chief minister Raman Singh and the Union home ministry, who are as responsible for the Salwa Judum as Karma, should also be held accountable. At least 644 villages were affected, over a thousand people killed, hundreds raped, and some 1,50,000 displaced. Small children were bashed to death or thrown into ponds; old people who could not run away were burnt alive. Yet there has been no prosecution or compensation, despite the Supreme Court’s repea­ted orders. Indeed, there is a danger that, with Karma gone, the uncomfortable questions regarding official culpability for Salwa Judum will be closed. The Constitution and democracy are not terms of expedie­ncy, as the Congress and BJP seem to think—they embody difficult moral principles which must guide our collective behavior.

To respond with even more force now would be a grave mistake, for insurgencies thrive on government excesses. The combing operations under way must take great care to see that ordinary villagers are not harassed. It is unlikely that anyone will countenance calls for peace talks now, as the war has become a prestige issue on both sides. But eventually, there is no alternative to negotiations. If a country like the US with its military might could get bogged down in Vietnam and Afghanistan, what makes us think we can succeed militarily? A far better model would be the Latin American countries, like Peru and Guatemala, with similar histories of guerrilla war and exploitation of indigenous people which resolved their conflicts through Truth and Reconciliation Commissions. If FARC and the Colombian government can come to an agreement on land reforms after 30 years, what prevents a democracy like India?

(The writer, a professor of sociology at Delhi University, was a co-petitioner in a case that resulted in the Supreme Court’s 2011 ban on the Salwa Judum.)

Dear BJP, India needs green cities, not smart cities #WAKEUP
Lakshmipet Dalits wait for land distribution after one year
Kudankulam protests: Fishermen lay siege to Tuticorin port
Your closest friend may be smiling all the time and yet battling depression