India – The blurring line between corporate and national interests 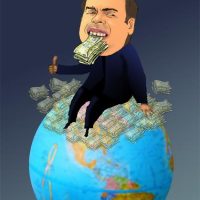 Today, corporate power has not only grown to unprecedented levels, its muscular arms also reach far and wide. Representatives of private businesses sit on all sorts of government committees

Among other major developments in Indian society and politics during the last twenty-five years or so is the steady growth of corporate power. It is not that corporate interests were devoid of influence earlier – India’s leading business houses, like the Tatas and Birlas, have had a cosy relationship with the government for a long time.

Even Dhirubhai Ambani, the icon of Indian entrepreneurs, made his fortune on the back of the Licence Raj (e.g. by getting hold of valuable import permits), with a little help from pliable bureaucrats and politicians.

In those days, however, there were some boundaries – real or pretended – between the corporate sector and state policy, and the state sometimes took decisive action (for better or worse) against corporate interests, such as the nationalisation of banks and the coal industry. Further, the concentration of wealth was still at an early stage.

Today, corporate power has not only grown to unprecedented levels, its muscular arms also reach far and wide. Representatives of private businesses sit on all sorts of government committees, oblivious of conflicts of interest.

The Sensex, tensely watched by the Finance Ministry, pronounces instant verdicts on economic policy. State governments are competing to enhance their ranking in terms of the “ease of doing business”. Public–private partnerships give private business wide powers to invade the earlier realm of the public sector with full state support. The magnitude of corporate scams (such as the 2G scam or the coal scam) keeps breaking new records. India’s largest corporate houses are also bankrupting its public-sector banks by saddling them with billions of rupees of “non-performing assets”.

The largest of them all, Reliance (headed by Dhirubhai Ambani’s sons, Mukesh and Anil), has so much power that, as India Today once put it, “when they don’t like policy, they change it”. Corporate interests increasingly drive not only the traditional areas of business but also urban planning, academic research, communications, sports, entertainment, the mass media, and much more. India is in danger of becoming a “business-driven society”, as Noam Chomsky aptly describes the United States.

We had a bitter taste of the invasion of public policy by corporate interests in the context of child nutrition programmes, especially school meals and the Integrated Child Development Services (ICDS). With millions of children covered, a contract to supply ready-to-eat food to them under these programmes, instead of cooked food prepared by local women, can be very lucrative.

India’s food industry has not lost sight of this business opportunity, and it has persistently lobbied for the replacement of cooked food with branded products in the midday meal scheme and ICDS. One example is the biscuits industry’s attempt, in 2008, to persuade the Ministry of Human Resource Development to replace cooked midday meals with biscuits. That particular attempt was defeated, but there have been many others since, and some of them have succeeded, at the state level if not at the national level.

The hold of corporate power on public policy in India has many other manifestations, from the plunder of public sector banks to the appropriation of land, water, minerals, and (until recently) spectrum at throwaway prices. Another example is technocracy, in the broad sense of an over-influence of technology experts on public policy. Technological innovation, of course, is very important and has often made major contributions to more effective social policies.

For instance, the NREGA’s web-based monitoring and information system (MIS) has become a model of pro-active information disclosure for all government programmes in India. Sometimes, however, technology seems to become an end in itself, driven by hidden interests at the expense of the public.

There is a strong element of technocracy in India’s unique identity (UID) project, also known as Aadhaar. The project was sold to the public by claiming, firstly, that Aadhaar was a “voluntary facility”, and secondly, that its main purpose was to remove corruption from social programmes.

This was a brilliant act of what the leading lights of Aadhaar call “smart demand evangelisation”. The claim that Aadhaar was voluntary defused criticism from libertarians, despite Aadhaar representing a real threat to privacy, civil liberties, and the right to dissent.

The swift linkage of social programmes like NREGA to Aadhaar helped to herd people en masse towards UID enrolment centres. Later on, it became clear that the voluntary nature of Aadhaar was a fiction, and that the real purpose of the project had little to do with social policy.

Rather, the project seems to be driven by a convergence of corporate interests (from the biometric industry, software companies, finance-technology developers, and so on) and state interests (related inter alia to the value of Aadhaar as a tool of surveillance).

The Aadhaar juggernaut, however, rolls on. In fact, the coercive nature of the project reached new levels last year with notifications making Aadhaar compulsory for children who wish to benefit from the midday meal scheme. No Aadhaar, no food.

This is being projected as an anti-corruption measure, but the real purpose is clear: forcing parents to get their children enrolled under Aadhaar (the bulk of the shortfall from universal enrolment is among children). It would be more honest for the government to admit that Aadhaar is compulsory, and to make the case for compulsion.

(This is an excerpt from the author’s recent book, Sense and Solidarity: Jholawala Economics for Everyone).