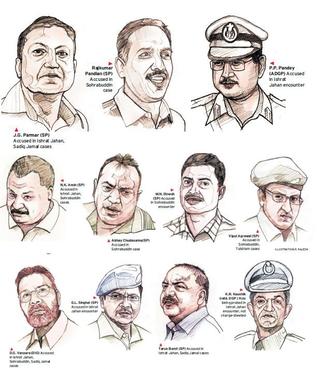 Extraordinarily, more than a dozen senior police officers in Gujarat are in jail or  facing prosecution, in connection with cold-blooded murders dressed up as encounter deaths.

Darshan Desai traces the hand of politics in the extrajudicial killings.

At a recent function in the state capital, Gandhinagar, Gujarat Chief Minister Narendra Modi warned the Central Bureau of Investigation against becoming a tool in the hands of the Congress-led union government. He asserted: “Modi is not scared of the CBI which has become the Congress Bureau of Investigation. Nobody is going to rule Delhi forever.”

Mr. Modi obviously knew what was coming because a few days later, on July 3, 2013, the Central Bureau of Investigation filed its first charge sheet in the Ishrat Jahan fake encounter case that went into minute details of how select police officials of the Ahmedabad’s crime branch, led by the then Deputy Inspector General D.G Vanzara, plotted a sinister conspiracy to kidnap and hold in illegal confinement the 19-year-old Mumbai girl and three others before murdering them in cold blood.

An important point missed out by the BJP and those critical of the CBI is that the agency is investigating the case not at the instance of the central government but on orders from the Gujarat High Court. Secondly, this is not the only encounter case for which Mr. Modi’s police officials are in the dock. Two other cases have been equally sensational, the triple murder of Sohrabuddin Shaikh, his wife Kauserbi and accomplice Tulsiram Prajapati and the suspected fake encounter of Sadiq Jamal Mehtar.

What raises the suspicion of conspiracy in these cases is the recurrence of the same names in all of them. Mr. Vanzara, in particular, emerges as the lynchpin common to the Ishrat, Sohrabuddin and Sadiq Jamal encounters. Even more curiously, the suspected terrorists in all the cases were said to be on a mission to assassinate Chief Minister Narendra Modi and senior BJP leaders.

Senior Intelligence Bureau official Rajinder Kumar’s name figures in the Ishrat Jahan and Sadiq Jamal cases. The CBI’s charge sheet in the Ishrat case suggests that Mr. Kumar was involved in planning and facilitating the conspiracy.

Senior lawyer Mukul Sinha, who has been fighting these as well as several 2002 pogrom cases, says the Gujarat Government used the encounters both to sustain the propaganda that Muslim terrorists were out to kill Mr. Modi to avenge the 2002 violence and to show that the State police would not tolerate this. Mr. Sinha attributes the official complicity in the encounters to the eagerness to please the Chief Minister. “Those officials who refused to toe the line during the 2002 violence were all sidelined.”

Gujarat saw 21 encounter killings between October 2002 and December 2006. As Mr. Sinha remarks, “It is strange that the threats to Mr. Modi stopped after this period.”

Then Director General of Gujarat Police RB Sreekumar said the State government rewarded loyal officers with the choicest placements, post-retirement assignments and other favours and punished those that did not toe the line with sinecure postings, supersession in promotion and disciplinary proceedings.” Mr. Sreekumar, who as a senior intelligence officer reported that Mr. Modi’s speeches in 2002 were incendiary, was himself sidelined.

The travails of Inspector-General of Police Satish Verma underscore this point. Mr. Verma, a 1986 batch official, was attached by the Gujarat High Court to the CBI to assist in the Ishrat Jahan investigations. Mr. Verma’s zeal placed him in opposition to the State government which tried its best to detach the officer from the investigations, only to find the court standing rock-like behind him. A Division Bench of Justice Jayant Patel and Justice Abhilasha Kumari gave a tongue-lashing to the Modi government for obstructing the investigation by insisting on Mr. Verma’s return to the state services.

The court told the State’s Additional Advocate General Tushar Mehta, “not to get psychologically disturbed” when he asked, “Has the CBI become so insolvent that it cannot work without an officer (Verma)?”

Mr. Verma was shunted out to the Police Training School, Junagadh by the government last year. Yet when he was asked to assist the CBI, the same government pleaded that his services were very critical to its functioning. Mr. Verma challenged his transfer before the Central Administrative Tribunal, contending that it was to hamper the Ishrat Jahan investigations. The tribunal sought an explanation from the government.

Investigations in the Ishrat case have changed several hands. The case was handed over to a SIT comprising IPS officials Pramodkumar, J.K. Bhatt and Mohan Jha. Following their failure to complete the probe, the Gujarat High Court formed another SIT with Mr. Satish Verma and Mr. Jha as members and Karnail Singh of the Delhi Police as the head.

Mr. Singh wriggled out of the SIT saying he had got a posting to Mizoram. Maharashtra official Satyal Singh was called in next but he declined the position saying he did not know Gujarati. Then came Andhra Pradesh’s R. R Rumudu who extricated himself citing health grounds. He was replaced by R.R Verma under whom the SIT described the case as a fake encounter.

However, Mr. R.R Verma also left followed by Mr. Mohan Jha. This left Mr. Satish Verma alone. In December 2011, the High Court asked the CBI to take over the investigations, with Mr. Verma assisting it. The result was a fresh offensive against Mr. Verma and the reopening of a 1993 case against him.

Mr. Vanzara and others, on the other hand, moved about with impunity. A September 2002 report by Mr. Sreekumar to the Police Commissioner accusing Mr. Vanzara of planting illicit firearms on members of the minority community went unheeded. Instead, Mr. Sreekumar found himself transferred out.

Says the now retired police officer, “Had the State government acted on this information and checked Mr. Vanzara, the right message would have gone to the police officers who would have desisted from the extra-judicial killings which have incalculably hurt the Gujarat government.”

*A photo sketch of an official has been deleted to avoid ambiguity in the above report.

Bihar Votes Sans Modi Wave, All Parties In The Reckoning
Covid 19- Horror stories from Mumbai's Seven Hills Hospital
Dalit women tortured by Morshidabad police #Vaw
Comments made by the Chief Justice are an Affront to the Dignity of Women