A Different Shade Of NRI

REUTERS (FROM OUTLOOK 19 JANUARY 2015)
Class difference? Why doesn’t the govt look at NRIs from Kerala in the Gulf?
The hype is over the Indian diaspora in US and UK. There are 70 lakh in the Gulf.
MINU ITTYIPE 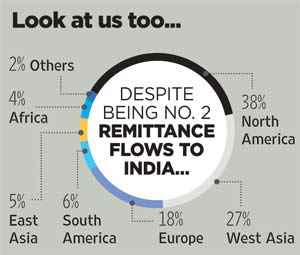 It’s that time of the year when NRIs descend upon India in hordes. This time around, there’s plenty to celebrate as Narendra Modi has pulled out all stops to welcome an overseas Indian community that had (by and large) supported his successful campaign to become PM. However, even as the rich diaspora is feted at the two galas in Ahmedabad, there is a sense of disquiet that the BJP government has been careless about the welfare of the poorer migrants toiling in West Asia.

Though former diplomats and policy wonks cautiously say that it is still too early for foreign policy about West Asia to have congealed, there are many who feel that the welfare of the 70 lakh mig­rants in the Gulf countries, whose annual remittances is around $20 billion and constitute a bit under 30 per cent of such flows into India, should be a top priority if indeed “diaspora outreach is a key element in foreign policy initiative”. The poorer migrants from India in the Gulf have definitely not been ‘outreached’ enough.

Talmiz Ahmad, a former Indian diplomat with an interest in West Asia, disagrees cautiously. “We have had a brisk exchange of high-level official and ministerial visits,” he says, adding that “our ties with the Gulf have an enduring value that is not linked with the political orientation of the government in power in Delhi”. It goes without saying that the Gulf is India’s principal energy source, and also a major trade, investments and joint venture partner.

Besides the high remittances, the trade between India and the Arab nat­ions stands at $200 billion—yet, Prime Minister Narendra Modi has not found time to visit the Gulf countries (and there is little to indicate a visit is on his calendar in 2015 either). Though foreign minister Sushma Swaraj has visited uae and Bahrain, eyebrows are already sky high in diplomatic circles. An open engagement with Israel, combined with falling prices of oil and the volatile political situation in the region, may not augur well for India.

A foreign policy wonk with knowledge of the region doesn’t mince his words: “The BJP-led government is just not int­erested in the problems of the Gulf Arab states. That’s basically because from north India, only poor Muslims go to these countries. Unlike the feting of richer NRIs, the degree of interaction with the poor NRI community is zilch.”

It’s a different matter in the south, of course—in Kerala, the situation is being keenly watched because 22 lakh of the Indians in the Gulf are from the state. They play a crucial role in the state’s economy. Says K.C. Joseph, Kerala minister for rural development, culture, planning and NORKA (Non-Resident Kerala Affairs), “There should be honest efforts to build good relations with Gulf countries, taking into account our traditional relationship with them and the presence of a large number of Indians there.” The minister also says that the general perception was that there was a shift in foreign policy. “The PM has not paid a visit to any Gulf country in spite of his extraordinary foreign visits in such a brief time.”

But Syed Akbaruddin, spokesperson for the Union ministry of external aff­airs, points out that foreign policy is not about foreign visits. “Give some space for foreign policy to evolve. The government has maintained our strong relations with the Arab countries. It has reiterated in the past three-four months in different forums that the policy remains the same,” he stresses.There has been one evident change though—the BJP government’s open friendliness to Israel is being watched carefully. Modi’s relation with Israel began when he was chief minster of Gujarat. He visited Israel in 2006 and since then, Gujarat has had trade relations with the country. Modi met Israeli prime minister Benjamin Netanyahu in September 2014 in New York on the sidelines of the UN General Assembly. The Times of Israel reports that Netanyahu said he was “delighted” to meet Modi and invited him to visit Israel, in what would be a first for an Indian prime minister. Reports indicate Sushma Swaraj is likely to visit Israel soon.

Will the pro-Israeli stance of the government be at the cost of our support for the Palestine cause? E. Ahamed, MP and former minister of state for external affairs, says, “We have a legacy that Gandhiji has taught us—about Palestine and their right to have a motherland. Since then, we have been following it. It is a very sensitive issue. I don’t think there is any change in our position.” But he does stress that “if there is any change in policy towards Palestine, there will be an adverse effect on our relationship with Arab countries in time to come.”

Akbaruddin is also quick to point out that this government has reiterated support for Palestine more than three times in the past few months to dispel any general misperceptions. “We did vote against Israel on the resolution against bombings in Gaza. Sushma Swaraj attended the nam meeting on Palestine and the prime minister sent a message on the Palestine day. The policy has not changed,” says he.

A key concern is falling oil prices. Unless India has good relations with them, as oil prices dip, some of the West Asian countries might send Indian workers back. Warns Arne Walther, former secretary general of the International Energy Forum, headquartered in Riyadh, “Sharp fluctuations in oil prices are disruptive and have not only adverse economic impact, but can also have adverse political, soc­ial and environmental effects as well.”

Even as analysts split hairs about what the government is doing right and wrong, the worrying fact is that there are very few people who understand the area well though there is geographical proximity. That’s unfortunate as India’s relations with the Arab countries also affect our immediate neighbours Pakistan and Afghanistan. The stakes are high. Says Talmiz Ahmad, “Given India’s high stakes in the security and stability of the Gulf, I strongly advocate that India should be more actively inv­olved in promoting regional security.”

Meanwhile, consider the case of the 39 poor Punjabi labourers who have been kidnapped by the isis in Mosul, Iraq, nine months ago. The external affairs minister, even as she assured Parliament that she hoped they were alive and all was being done to bring them home, also added that there is “no solid proof of either they being alive or killed”. One doesn’t necessarily have to witness the hysteria around Modi’s speech at Madison Square Garden to know that, perhaps, some NRIs are more equal than others.