Neither the din of traffic nor the roar of aircraft from a nearby airport could blot out the screams neighbours say they regularly heard from the apartment building in west Delhi.

On Saturday, on the second floor of the unassuming complex in Mohan Garden, authorities discovered 21 women and children living in a heavily fortified “spiritual university”, at least five believed to be minors.

Raids across India in the past week on properties linked to the same religious organisation, Adhyatmik Vishwa Vidyalaya (AVV), have unearthed nearly 250 women and 48 girls apparently confined behind layers of locked gates. 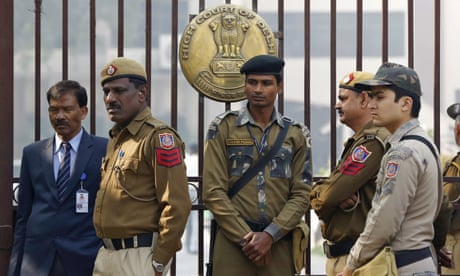 Authorities in Delhi say they fear thousands more women could be living in similar conditions in the 300 properties estimated to be linked to the group nationwide.

Syringes and medicines were found scattered throughout the Delhi ashrams and many of the residents appeared to be drugged, according to Swati Maliwal, the city commissioner for women, who participated in five of the raids.

Most of the women have refused opportunities to leave the ashrams. Those who appear to be under 18 have been taken to shelters but are providing little concrete information, Maliwal said.

“We ask where they’re from, they can’t say. We ask them the address of their parents, they don’t have that. We ask how long they’ve been there, they give evasive answers,” she said.

Gurus are enlightening guides in the lives of many Indians, providing counselling on issues ranging from moral quandaries to the choice of a new car.

But months after a flamboyant guru, Ram Rahim Singh, was convicted of rapingtwo followers – sparking riots that killed 30 people – the raids of the past week have cast light on the immense, often unchecked power wielded by some spiritual leaders.

At the centre of the organisation is a self-styled “godman”, Virendra Dev Dixit, with a chequered history including allegations of sexual assault dating to 1998. He is currently being sought by police and could not be reached for comment.

Accusations contained in documents filed with the Delhi high court allege that Dixit, 75, is portrayed by ashram workers as an incarnation of the Hindu god Krishna, with the women and girls cast as his gopis, or wives.

The group claims to be a fundamentalist offshoot of Brahma Kumaris, an Indian spiritual movement with about 800,000 members and branches around the world including in the US, Australia and the UK. Brahma Kumaris disavowed Dixit decades ago and reject his beliefs.

Families have complained of losing daughters to Dixit’s organisation for decades but have been unable to secure official attention until this year, when the Delhi high court took up a public-interest lawsuit against the group.

The case was spurred by the November disappearance of a 24-year-old woman from a town near Jaipur in Rajasthan state. Family members said she had initially become involved in yoga and meditation events put on by the Brahma Kumaris.

But quietly, over the past five years, she was growing closer to members of Dixit’s group.

One day last month, in what investigators believe is standard practice for new converts, the woman entered a local police station with a signed affidavit declaring she was joining the AVV of her own free will. Soon after, she vanished.

A frantic search effort by the family traced the woman to a large Dixit ashram in Rohini, a neighbourhood in the north-west of the capital.

In submissions to the Delhi high court, the family say they were only permitted to meet their daughter after protesting for days, and had to pass through seven layers of locked gates to meet her. They claim she was flanked by women guardians, and appeared to be anaesthetised.

“The girl told them, I am 24, I have come here of my own wish, and I should not be forced to go back,” said Satendra Singh Rathore, a lawyer for the family.

After their story was broadcast by Indian media, disaffected former members of the group and other families searching for their daughters reached out with their own allegations against Dixit.

According to the public-interest lawsuit, they include accusations that Dixit has sexually assaulted multiple women and children and keeps residents confined in conditions “worse than farm animals”.

A spokeswoman for the AVV declined to comment but the organisation has previously said its residents stay of their own volition and are well-treated.

In a society riven by caste hierarchy and yawning economic inequality, ashrams and large-scale spiritual communities, called deras, were an appealing site of social equality and fraternity, said Ronki Ram, a professor of political science at Panjab University.

Their popularity has grown as India’s economy has opened to the world and incomes have soared in past decades. “Once people have everything, a partner, a good job, a family, and find they are not really happy, they go to a dera,” Ram said.

Spiritual organisations have also stepped to provide welfare in places where the state had retreated, he said. “Some have their own schools, hospitals. When the state starts withdrawing from providing basic facilities, the deras fill in the gaps.”

He said politicians have been more likely to seek out gurus for votes than to try to regulate their communities: “They see [the gurus] have a large numbers of followers who can be constituencies.”

Dixit has never registered his organisation with the government. Years of criminal complaints against the guru did not heed a single inspection of his properties. Maliwal said it was typical of the lawless environment in which many spiritual leaders operated. “Nobody bothers to go inside their ashrams,” she said.

“These babas are very influential people, they have a lot of clout. Sometimes they have mafias, and sometimes they are mafias. Nobody wants to deal with this issue.”