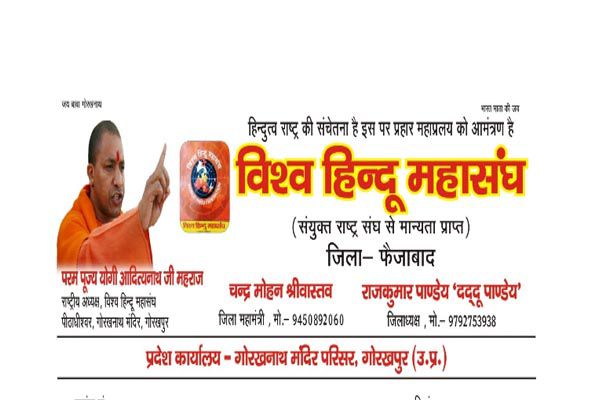 Agra (Uttar Pradesh) [India],: A Hindu right-wing group on Sunday announced that they would oppose the New Year’s celebrations here with the support of ruling Bharatiya Janata Party (BJP) party.

Vishwa Hindu Mahasangh chief Manoj Agrawal the New Year’s celebrations were part of Western culture, which they would not allow to reign in here.

“In the name of New Year celebrations, obscenity is witnessed in hotels and we condemn it. First we will try to explain them through methods used by Mahatama Gandhi, but if they do not accept it then actions will be taken,” Agrawal told ANI

“We are enlightening the youth to celebrate the New Year according to Hindu custom, so that the next generation will be aware of our culture,” Gupta added. (ANI)

The Principle objective of the WHF shall be promote Hindu philosophy through effective coordination and cooperation by providing common platform to Omkar Pariwar i.e. Vaidie, Jain, Budhhist & Sikhh organization.