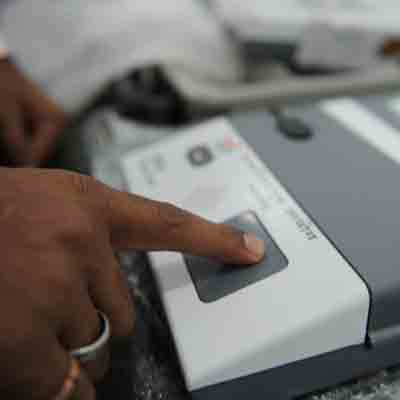 In a landmark verdict, the Supreme Court on Friday held that citizens have right to cast negative vote rejecting all candidates contesting polls, a decision which would encourage people not satisfied with contestants to turn up for voting.

The apex court directed the Election Commission to provide ‘none of the above options’ at the end of the list of candidates in electronic voting machines (EVMs) and ballot papers to allow voters to reject those contesting polls.

A bench headed by Chief Justice P Sathasivam said that negative voting would foster purity and vibrancy of elections and ensure wide participation as people who are not satisfied with the candidates in the fray would also turn up to express their opinion rejecting contestants.

It said that the concept of negative voting would bring a systemic change in the election process as the political parties will be forced to project clean candidates in polls.

The bench noted that the concept of negative voting is prevalent in 13 countries and even in India, parliamentarians are given an option to press the button for abstaining while voting takes place in the House.

The court said right to reject candidates in elections is part of fundamental right to freedom of speech and expression given by the Constitution to Indian citizens.

It said that democracy is all about choice and significance of right of citizens to cast negative voting is massive.

With the concept of negative voting, the voters who are dissatisfied with the candidates in the fray would turn up in large number to express their opinion which would put unscrupulous elements and impersonators out of the polls, it said.

The bench, while reading out the operative portion of the judgement, did not throw light on a situation in case the votes cast under no option head outnumber the votes got by the candidates.

It said that secrecy of votes cast under the no option category must be maintained by the Election Commission.

The court passed the order on a PIL filed by an NGO, People’s Union for Civil Liberties (PUCL) which had submitted that voters be given theright to negative voting.

Agreeing with the NGO’s plea, the bench passed the path-breaking verdict and introduced the concept of negative voting in the election process, saying that it would further empower the voters in exercising their franchise.

The latest verdict is part of series of judgements passed by the apex court on the election process.

Earlier, the apex court had restrained people in custody from contesting elections.

The apex court has also ruled that MPs and MLAs would stand disqualified after being convicted of serious crimes.

The government has brought an ordinance seeking to negate the court’s judgement striking down a provision in the electoral law that protected convicted lawmakers from immediate disqualification.

A two-judge bench of the apex court had felt that the issue on negative voting needed to be adjudicated by a larger bench as there were certain doubts over the interpretation of the ruling passed by a Constitution Bench in the Kuldip Nayar Vs Union of India case relating to a voter’s right.

Under the existing provisions of Rule 49(O) of the Representation of People Act, a voter who after coming to a polling booth does not want to cast his vote, has to inform the presiding officer of his intention not to vote, who in turn would make an entry in the relevant rule book after taking the signature of the said elector.

According to the PUCL, Rule 49(O) was violative of the constitutional provisions guaranteed under Article 19(1)(a) (Freedom of Speech and Expression) and Article 21 (Right to Liberty) and violated the concept of secret ballot.