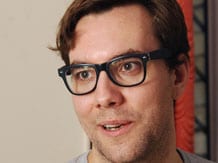 He prefers that the audio recorder is not switched on during the interview because “whenever there’s an audio recording, there’s a file to be subpoena-ed”. And, he’s stuck a band-aid over the camera of the laptop he’s been working on. All these precautions are not without reason – Jacob Appelbaum, computer security researcher, hacker, activist, and a spokesperson for WikiLeaks, who also co-authored Cypherphunks: Freedom and Future of the Internet with WikiLeaks’ founder Julian Assange, talks to Indulekha Aravind about the potential pitfalls of India’s ambitious UID project. Excerpts:

What is your view of India’s UID/Aadhaar programme?
UID will create a digital caste system because going by the way it is now being implemented, if you choose not to be part of the system, you will be the modern-day equivalent of an outcast. In theory, you are supposed to have the freedom to choose but in reality, the choice will only be whether to be left out and left behind.

What about the benefits it is supposed to offer, such as tackling corruption and protection against terrorism?
I don’t dispute that there will be benefits but I dispute whether UID will end corruption and whether one will be able to opt out of the system with dignity. Criminals will be able to subvert this system easily. In Germany, for example, a group of hackers were able to duplicate the fingerprint of Schauble (Germany’s finance minister, a proponent of collecting biometric data). And, it now costs less than a dollar to get a transferable fingerprint. About the question of containing terrorism, imagine a situation where a terrorist gets access to the central UIDAI (Unique Identification Authority of India) database — he will be able to get all the details of every individual he wishes to target.

Considering that the programme has already been rolled out, what can the government now do to safeguard individual privacy?
First of all, there should be no centralised database. The information should be just on the cards. This can easily be done with smartcards. If you link all the information, that amounts to surveillance. There should also be legislation to prevent discrimination against people who have not registered with UIDAI.

What is your current involvement with WikiLeaks?
I like that to remain ambiguous (smiles). I’ve given talks on behalf of Julian (Assange) when he was unable to. After one particular talk I gave in 2010, my life changed. I was repeatedly harassed by US authorities.

What are the other projects you’re currently involved with?
I do computer security-related research, I work with human rights activists, and work with open software. I’m also involved with the Tor project, which aims at improving users’ privacy and security on the internet. If an Indian businessman goes to China, for example, and does not want his internet usage to be monitored, he can do that with Tor. (The Wall Street Journal termed Tor “an anonymous, and controversial, way to surf the Net”).

You have been dubbed a “hacktivist”…
I started working with open software and hacking before I was 15, after I realised I wanted to live in a world free from state surveillance. I’m a human being who does investigative journalism, research, and even works on international policy – I prefer not to be pigeon-holed.