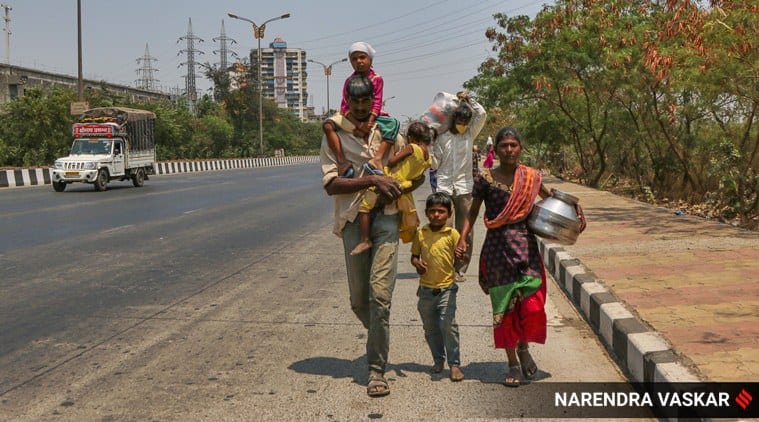 XTo be sure, one thing this virus has done is to put the spotlight on the plight of the poor, despite the best we have done to conceal this corrosive reality.

The greatest comfort for the privileged citizens of India is that the poor and their misery are invisible. Ensconced as they are in a world of the visible, to them what is not visible does not exist. It is enough that their part of India is shining. But a time comes when this changes in an alarming way. That time has now come, and it is called COVID-19.

This crisis has torn apart a façade. The stark reality is now to be seen everywhere. Migrant labourers moving — like hordes of refugees in their own land — across states, walking hundreds of kilometres in near-death desperation. A few perished out of exhaustion. Dozens got crushed in street accidents. And when the situation apparently improved, dead bodies were found inside Shramik Special trains that were ferrying them like cattle to their home states. A little child was found trying to wake up his mother, who lay dead on the platform. But who will wake up the calloused conscience of a nation that has become blind to human suffering in its obsession with the politics of profit and the profit of politics?

To be sure, one thing this virus has done is to put the spotlight on the plight of the poor, despite the best we have done to conceal this corrosive reality. We can no longer pretend that we don’t see or understand this reality. Or, that it doesn’t exist. Their poverty has now become our risk. So, we, the rich, better do something about this systemic exploitation and brutalisation of the poor — else, their misery will continue and affect us in the process. Well, that is the message from Dharavi, isn’t it? This sprawling slum is today Mumbai’s nightmare. That thousands in that slum are already infected, and tens of thousands more are vulnerable to infection and death, would not have mattered to us if the virus had spared the rich and the affluent elsewhere. This is nothing new. Historically, there has always been a connection between epidemics and poverty. Poverty breeds and perpetuates squalor. The poor all over the world are condemned to hell on earth, in which they live together — crowded, with little space to breathe and still less to move about. An unhygienic space is their lifelong companion. Their domestic settings, too, are such that they are vulnerable to plagues and epidemics. Looking at the plight of the poor in our backyard could be embarrassing. So, let us look away and see how this has played out elsewhere in the past.

About the Plague in England and Ireland, Engels had written: “When the epidemic was approaching, a universal terror seized the bourgeoisie of the city. People remembered the unwholesome dwellings of the poor, and trembled before the certainty that each of these slums would become a centre for the plague, when it would spread desolation in all directions through the houses of the propertied class.” If that is not a substantial enough reference, here is the plight of a victim of the Plague, Ann Galway, aged 45 years. “She had lived at No 3 White Lion Court, Bermondsey Street, London, with her husband and a 19-year old son in a little room, in which neither a bedstead nor any other furniture was to be seen. She lay dead beside her son upon a heap of feathers which were scattered over her almost naked body, there being neither sheet nor coverlet. The feathers stuck so fast over the whole body that the physician could not examine the corpse until it was cleansed, and then found it starved and scarred from the bites of the vermin.”

This is a cause for worry because in every city in India, as in other countries too, slums holding tens and thousands of poor citizens, exist cheek-by-jowl with enclaves of affluence. That is because the rich cannot live without the service of the poor. Every city will collapse if the poor get up and walk away towards the North Pole. It will leave the rich helpless. The poor must be there for them to be rich and, even more, to enjoy their affluence. However, if the poor exist without being reduced to abject helplessness, then too, the rich will be in trouble. So the poor must be reduced, instead, to helplessness, misery and utter indignity. Else, who will carry away our excreta, clear our drains and sewages, keep our paths and pavements clean, build our skyscrapers, luxury hotels, malls and roads?

That explains why the lockdown was designed to paralyse the migrant workers. First, it was meant to ensure these potential carriers of the virus did not infect the distant parts of the country. We lived in our comfortable houses because we wanted to be safe, and they were prevented from returning to their homes — again, because the country needs to be safe for our sake! Furthermore, allowing them to abandon the cities en masse, perhaps never to come back again, was unthinkable: Life in the cities would freeze. So, they ought to stay back and practise social distancing, again, for our sake.

Washing hands with soap and water, say every two hours, wearing masks and maintaining social distancing are laughably impractical for these lesser citizens of India. Imagine practising social distancing in Dharavi, or any slum in any of our cities, where at least six adults live per room. Where are the poor to find water and soap to wash their hands as they are asked to? Is it because they are rebellious that thousands of them are seen without masks?

The good thing that COVID-19 has done is to make poverty an issue that is real, and visible, to the rich. That is the only way it would get any attention, even for a fleeting moment. This does not mean that the systemic issues pertaining to poverty and its multiple deprivations will be addressed. It only means that the risk born out of the squalor of the poor –and its many consequent health implications for the rich– will be addressed. The poor will not be allowed to remain a health hazard, in a way. That, in itself, is good news for the poor.

Hindu Makkal Katchi demands arrest of Kamal Haasan and 'Big Boss' contestants #WTFnews
India - Meet the Beti- Boxers Knocking down Patriarchy in Haryana
Why you should question #UID #AAdhaar ? and get answers #Saynotouid
The Bhopal Disaster and Medical Research