India – Where are the poor in the Budget? 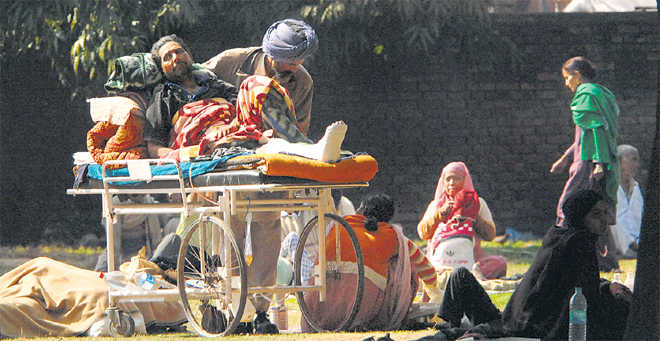 A crucial policy document, the Budget must provide appropriate cushions for the very poor. This, unfortunately, has not happened.

In bad shape: What India needs is an institutionalised universal healthcare and not an insurance-based model.

Ashwini Deshpande
Professor of Economics at the Delhi School of Economics, University of Delhi

The most optimistic estimates set the proportion of the Indian population below the poverty line at 22 per cent. And serious researchers of poverty argue that the official poverty line is among the lowest in the world; by any reasonable definition of poverty, the proportion of the poor would be far higher. But even the 22 per cent translates into roughly 300 million individuals.

What does the 2018 Budget offer to this massive population of the poorest Indians? The basic and universal life needs -food, employment, housing and healthcare – are even more critical for those who sit just above and below the poverty line, as any negative shock on these fronts could push the former into poverty, and make the climb out of poverty harder for the latter. And for those in chronic and desperate poverty, a negative shock could mean a difference between life and death. With a problem of this magnitude, one would expect the Budget, which is a crucial policy document, to provide for appropriate cushions for the chronically poor, and ladders for the marginally poor to help them climb out.

Unfortunately, these are conspicuous by their absence. Let’s take employment first, as poverty can be eliminated by generating jobs, and not through redistribution. The Budget does not address this at all! There is now increasing evidence to show how the ill-conceived demonetisation hit those using cash, and working in the informal economy, the hardest. This is the sector that the poor inhabit.

In the backdrop of this massive negative hit, one would have expected the Budget to provide for ameliorating measures, but there are hardly any.Research on the causes of poverty reveals that among the recurring triggers pushing people into poverty are negative health shocks.

A highlight of this Budget is the National Health Protection Scheme (NHPS), which promises a cover of up to Rs 5 lakh for 10 crore families per year. This sounds impressive until one realises that the Budget does not indicate how this scheme is to be financed. The outlay is just about Rs 2,000 crore, whereas this scheme would need at least 30 times as much, if not more.

The absence of funding is the least of the problems with this scheme. For a country beset with poverty and poor access to healthcare, we need institutionalised universal healthcare like several European countries, not an insurance-based model, which might put money in the pockets of some hospitals and doctors, but may not admit every person deserving of treatment.

The evidence from the earlier Rashtriya Swasthya Bima Yojana (RSBY) reveals urgent problems in the institutional architecture. Additionally, in any insurance-based system, the issue of whether “pre-existing conditions” would be covered for treatment is contentious: what happens to the disabled and chronically sick population? What the Budget needed to provide for was resources to strengthen and revitalise primary healthcare, and also resources for the prevention of disease: clean water, efficient garbage and solid waste management, and sanitation.

The Swacch Bharat Mission needed a clear-headed and hard rethink: to what extent has it moved beyond photo-ops and advertisements, and translated into cleaner neighbourhoods? What lessons can we learn from its failure? A large section of the poor is rural and engaged in small agriculture.

The Budget talks about the rural sector, but the focus is on infrastructure – rural haats, with  electronic linkages – not as much on the causes of agrarian distress caused by high indebtedness and sudden loss of income due to crop failures. The “in principle” commitment, again not matched by any budgetary provision, to give minimum support prices (MSP)to ensure 50 per cent returns over the cost of production addresses only one aspect of the mix of factors underlying rural distress.

To be fair, there are schemes in the Budget that might benefit the rural poor, which are actually backed by financial outlays, such as LPG connections to replace conventional chullahs; roads; electrification with a focus on bringing electricity to every home (and not just the village) and housing -i.e. pucca houses with toilets. Only time will tell if the government will actually seize the bull by the horns: would the monetary outlays on these schemes be adequate, whether these deliver on their promises, and how effective these prove to be in terms of making a dent in the spread and depth of rural poverty.

Groups that disproportionately bear the brunt of poverty, such as Dalits, Adivasis and Muslims, and a large proportion of women, have little to cheer either. The outlays on existing schemes have not been significantly enhanced; more disappointing is the lack of review of how the existing schemes have fared, and there are no new initiatives to ensure decent livelihoods to groups that are discriminated against and marginalised.

The government’s insistence on ABBA (Aadhaar-based biometric authentication) to access any government scheme is already proving to be disastrous for the poor. First is the issue of seeding – linking the Aadhaar card to various service providers. Then come immense problems in accessing services.

Connectivity issues, erosion of lines on the hands of those engaged in hard manual labour, the bureaucratic contempt for the poor has meant that those most in need are unable to access existing government provisions, even if we forget the new ones that have been promised. ABBA is not a part of the Budget, but it defines the delivery architecture for all government services. For the poor, overall, things look bleak.

The Budget does not promise any imaginative and bold new measures, and access to existing schemes is sinking deeper and deeper in the ABBA quicksand.

Irrfan Khan - “I am an Indian Muslim, but unlike me, most Indian Muslims are from artisan class. The...
MODI-FICTION: Say #NOMOre to Violence, Lies, Prejudice and Injustice
#AFSPA has never stopped rebellion #Northeast #Manipur
India's silk road offers path to prosperity but not equality for female weavers