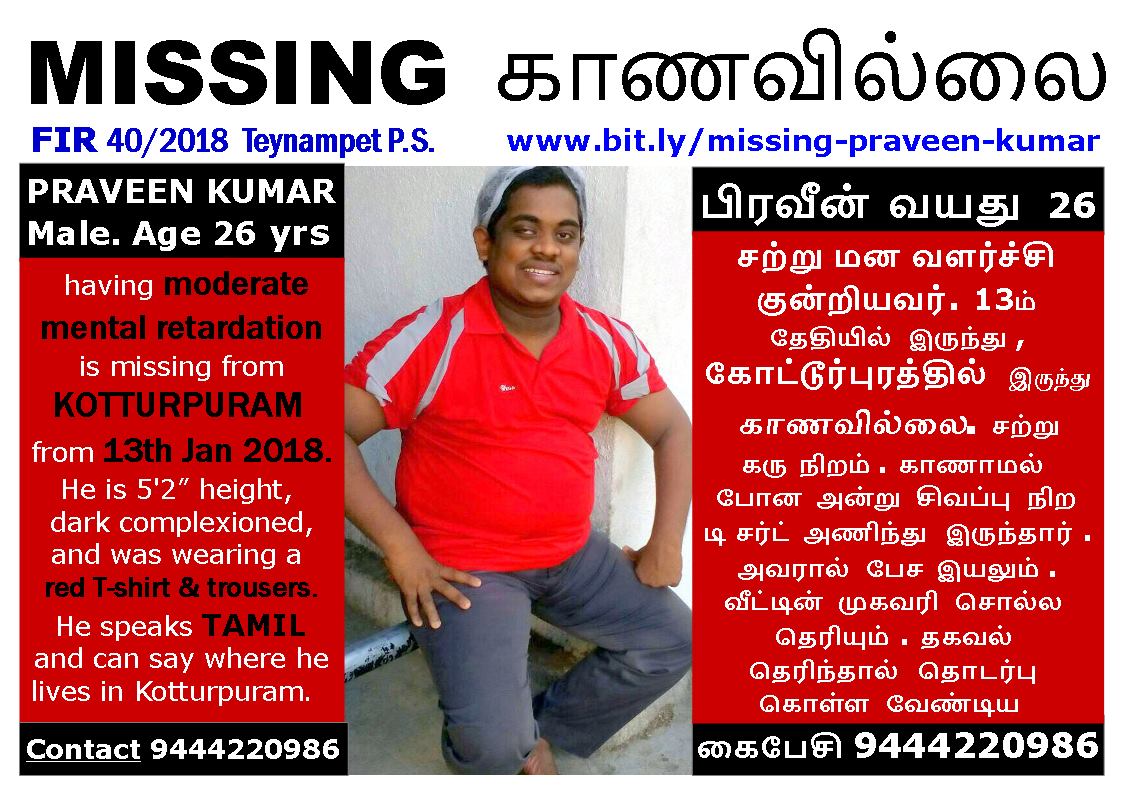 Missing on 13th
Killed on 14th
Unclaimed till 17th
Buried on 18th
‘Missing’ on 19th
Lives on-line today in 2 separate FIRs
… never the twain shall meet?

We, the undersigned, would like to draw your attention to the following matters arising from the tragic death of M Praveen Kumar, a young man with intellectual disability and one of his family’s breadwinners, holding down a steady job for over 5 years after finishing his schooling with Vidya Sagar.

Early 13th January morning, Praveen and his mother got separated from each other at Adyar Gate bus stop when travelling to his workplace. As soon as Praveen’s mother realised that he had not boarded, she got down and took an auto back but he was not to be seen. Along with a colleague of Praveen’s she searched in vain and finally went to Teynampet Police Station to lodge an FIR. Despite her providing all information before 9 a.m., it took until 5 pm for the FIR 40/2018 to be actually filed and 4 days after Praveen’s death for the FIR to appear online on CCTNS. Every subsequent action by the police (from sharing description over the wireless from the police control room to disseminating Praveen’s photo over What’s App groups etc) seems to have been triggered by a corresponding nudge from the citizen’s end.

As it happens, Praveen lasted less than 24 hours on the streets of his city – in the wee hours of 14th January while he was walking down the Anna Salai stretch opposite Devi Theatre, he was killed instantly when a vehicle crashed into the subway outside the head post office. FIR 20/2018 was lodged at 4:00 a.m. at Chintadripet Police Station on the basis of the witness testimony, barring his statement that the driver was obviously very drunk. It is to be noted that representatives of the police force have been quoted in the media providing differing versions of the accident that deviate sharply from the FIR.

16th afternoon, the citizen team’s hotline number received a call from Chintadripet police station stating an unidentified dead body in the morgue could possibly match that of the WhatsApp photo they’d received. As Praveen’s face was quite battered due to the head injury he’d incurred, it was communicated to the police that positive identification could only be made jointly by his parents and therefore necessitate a day’s wait pending his father’s arrival from Sabarimala where he was cut off from mobile communication.

10 days after Praveen went missing, the missing person FIR 40/2018 which went online (after Praveen’s funeral) remains unconnected to the accident FIR 20/2018. Praveen’s body lay in the morgue unidentified for 2 whole days while citizens continued searching actively for him – his photo was never uploaded in the unidentified dead body section of CCTNS website. Similarly the Mahindra Bolero van TN64 H 3769 that killed Praveen has also not been entered in vehicle status of police records.

With this as the background, we would like to request the following

We look forward to your support in making this possible,

For those who missed those nerve-racking days, here’s the background –www.bit.ly/missing-praveen-kumar