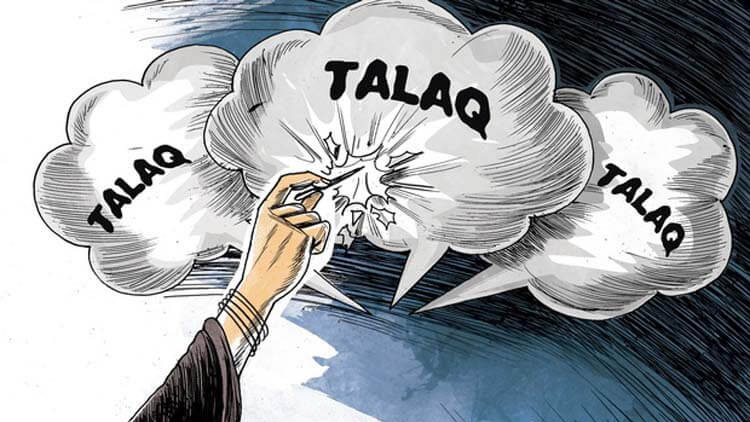 THE  opposition parties, especially the Congress party, seem to have gathered their wits after displaying a pathetic loss of nerves in the face of the Bill criminalising triple talaq was introduced in Parliament.

It was shocking to see a Bill of this nature being introduced, discussed and approved in a span of a few hours. The rush itself should have raised eyebrows. But the Opposition got thoroughly confused and failed even to properly press the serious objections raised by its members like Sushmita Dev, Adhir Ranjan Chawdhury and Asaduddin Owaisi.Only a political fool or a naive person can accept the government’s claim that the intention behind the Bill is to liberate poor Muslim women. The Law Minister loftily said that it was insaniyat which was driving the Bill and not siyasat. The way he dissociated insaniyat from siyasat says a lot about the vision of politics that his party professes and pursues.

According to this view, it should be acceptable to divide people and create bitterness and hatred while doing politics. In fact, you should not even demand humanity from politics. That explains the ruthless use of metaphors implying anti-Muslim feeling in the election campaign by the senior leaders of his party.

In the recent Gujarat elections, the Prime Minister criminalised the very thought of a Muslim being a chief-ministerial candidate. He divulged a secret that the Congress party wanted to make a Muslim the Chief Minister of Gujarat! As if it was against the Constitution or anti-national for a Muslim to be proposed for the top job in the state!Ironically, the Congress rushed to assure the people of Gujarat that there was no question of a Muslim like Ahmed Patel being made the Chief Minister if the party won the elections! It was sad to see Patel, a Gujarati to the core, clarifying that he was never in the race. That his name was being used to scare the Hindu electorate of Gujarat was very clear. But our learned Law Minster not only approved it but also campaigned on this political platform!

There was no question of a Muslim being treated as a citizen who could claim equal rights as enjoyed by other citizen. Let us hypothetically assume that if in place of a Muslim man like Ahmed Patel there was some Muslim woman! How would the BJP have reacted? How did it react when the name of Sonia Gandhi came up for the prime-ministerial post? The very thought of her being prime minister created such horror that the gentle ladies of the BJP threatened to go get their hair shaved off and sleep on bare floors for the rest of their lives! A politics which disenfranchises Muslims or Christians and yet claims to be their saviour in any sphere of their life!

The Bill criminalising triple talaq cannot but be seen in the light of this politics. A government which is firmly against criminalising marital rape, arguing that it would break families, cannot say that it can go to any length to protect Muslim women from the tyranny of their men! For, the proposal to make marital rape a crime was truly human as it did not differentiate between a Hindu woman and a Muslim or Christian woman. Muslim women could also have availed themselves of this law if wronged by their husbands!Some members rightly asked the government that if it was so serious about the human rights of women, why did it not even take up the issue of fair representation of women in the elected bodies by introducing the Women Reservation Bill. After all, it applies to all women, does not differentiate between Hindu or Sikh or Muslim women! It was a true insani call!

The government is, however, concerned about the human rights of Muslim women. It wants to save them from the tyrannical, orthodox, backward, cruel Muslim men! The state has to be on the side of the hapless Muslim women who would otherwise be driven out of their homes by their husbands by pronouncing triple talaq!Jurists, who cannot be called misogynist, have repeatedly said that this law is unnecessary. They are not for triple talaq. There is also a wider support to the demand of Muslim women to do away with his practice. The Supreme Court has held that triple talaq cannot be treated as talaq.After all this, why this rush to criminalise Muslim men?

The Bill actually addresses a Hindu constituency. It is the same constituency which is built and nursed by the fear of cow-eating, gym-going muscular Muslim men eyeing and grabbing Hindu women to breed Muslims and out-populate Hindus in their own land. They need to be shown as cruel not only in relation to Hindus or Hindu women, but also as being naturally cruel, even to their women! Muslim men are themselves a conspiracy against the nation and Hindus! Since they cannot be driven them out of this land because of the secular sin of Gandhi and Nehru, they can at least be disciplined! Muslim women in this scenario are being presented as prisoners of their men who need to be liberated from their oppression.

The idea of freeing Muslim women from their men is very seductive and powerful for this politics. It explains a half-truth that the Prime Minister peddled: that his government had made it possible for Muslim women to go to Haj without a male escort, thus allowing them to exercise their religiosity autonomously. Soon, the fact came out that his government was merely following the change introduced by the host country Saudi Arabia which had allowed groups of women above the age of 45 to go to Haj without a male escort way back in 2014.

The state under this regime wants Muslim women to be individuals, human beings free from the familial chains. Is it not strange that Hindu women are constantly being reminded by this very politics about the primacy of marital relations, family, duty towards their children? That it never exhorts them to come out of the shadow of their men and be only woman human beings?