India – Why Health Budget is not about people, but about markets 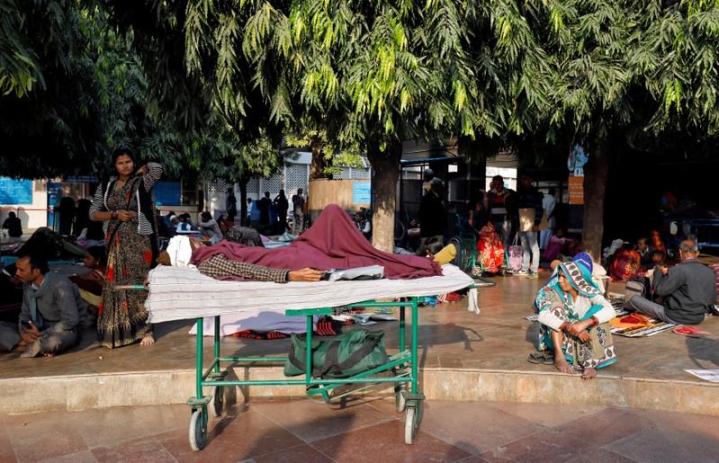 FILE PHOTO: Patients and their attendants wait outside the Out Patient Department (OPD) at a government-run hospital in New Delhi, India, November 22, 2017. REUTERS/Saumya Khandelwal/File photo

The Budget speech pitch of ‘Swastha Bharat’ as ‘Samridha Bharat’ is deception, because the allocation for realising that is missing.

Each year when the Budget is tabled in parliament, there is excitement and expectations. Should we say this used to be? Things have changed dramatically over the years.

In the good old days, during the Budget session, we would wait excitedly to know about the price hike in petrol, diesel and kerosene. Now this happens each day and in recent months gradually the price of petrol and diesel has increased to an all-time high and there are no protests.

Grudgingly people accept, hoping that in the weeks ahead this may reduce. So budgets no longer excite. They are a mere public relations exercise, where the incumbent government and media compete with each other to come up with fanciful and creative headlines, though no doubt also useful information and analysis.

But the Budget is politics that underlines the government’s policy commitments. In every Budget speech, there are a number of headline-catching statements which are then hotly debated in panel discussions, on the media and even on the streets. While in the good old days, budgets balanced their commitments between people and markets, in recent years we see an increasing shift in budgets being focused on markets and the private sector.

While civil society’s main concern is with regard to the impact on prices and taxes on their income and how their spending capacities are affected, this too is now being done outside the Budget. The Goods and Services Tax Council takes decisions for taxes on commodities and services, and a new direct tax code will soon take charge of income taxes. So then what remains of interest to civil society in the Budget?

Increasingly, allocations for social sectors like health, education, food and social security and other welfare programmes are beginning to matter and draw increasing attention of citizens and the media.

At the national level, these account for over one-fourth of the Budget, but at the state-level over-two fifths. This implies that for these sectors, then, the state budgets matter much more as the bulk of resources for these sectors are with the states – and more so post the 14th Finance Commission which hiked the share of states in devolved taxes, and after the death of the Planning Commission, a number of planned schemes and centrally-sponsored schemes have been undermined.

At present, the prime minister’s office is at the centre of such decision-making, with some of its thinking being done by the NITI Aayog. The line departments have been sidelined completely and have a very small say in key decisions pertaining to their policies and budgets. Lets illustrate this with the example of the health sector in the context of the 2018-19 Budget launched on February 1, 2018.

With the National Health Policy (NHP) mandating an increase in health spending to 2.5% of GDP, with 40% coming from the Union government, the current Budget is nowhere close to moving in that direction in terms of allocations. The NHP draft of 2015 reflected the mandate of the health ministry: strengthening the public health system, creating a right to healthcare legislation and reaching a public spend of 2.5% of GDP by 2018.

That draft was scrapped and the final version, NHP 2017 which was was tabled in parliament, focused on the private sector and the insurance model. The 2018-19 Budget health proposals should be thus contextualised in the 2017 NHP.

A health worker (R) weighs a child under a government programme in New Delhi, India, May 7, 2015. Credit: Reuters/Anindito Mukherjee

Thus the Budget speech pitch of ‘Swastha Bharat’ as ‘Samridha Bharat’ is deception, because the allocation for realising that is missing in the Budget.

It also speaks of converting the 1.5 lakh sub-centres into health wellness centres for which Rs 1,200 crore has been allocated. However, the same announcement was also made in the 2017-18 Budget and nothing has happened on this front with the exception of Kerala, which recently began implementing this.

In addition, states are estimated to spend Rs 185,000 crore in 2017-18 and perhaps close to Rs 200,000 in 2018-19. Together, the Centre and state budgets would add up to around 1.3% of GDP, slightly higher than 2017-18 estimate of 1.14% of GDP. The total estimated public health expenditure for 2018-19 would be about Rs 1,969 per capita for Centre and states combined, which is about half of what is needed in terms of the NHP goal. The current incipient rate of incremental increase in the Budget will never get us close to that goal. What we need is a radical shift of 40-50% increase per year in public health expenditure.

What about the allocations for other health sector flagship programmes?

The lack of seriousness in the finance minister’s intentions to realise a Swastha Bharat is revealed when we look at allocations for some of the key flagship programmes.

Where the National Health Mission (NHM) is concerned, there is a decline in allocation from Rs 30,801.56 crore in the 2017-18 revised estimate to Rs 30,129.61 crore in 2018-19, largely due to cuts in the National Rural Health Mission from Rs 25,458 crore to Rs 24,279 crore, a decline of 5%. The NHM is the key to strengthening public health services, and a reduction in its budgetary allocations will only decimate the few gains that have been made over the last decade in improved rural healthcare services. These gains are reflected both in the 71st National Sample Survey Organisation (NSSO) round results as well as the latest National Health Accounts, which indicate improved access to public health services and their utilisation, at least in rural areas and especially for out-patient care across states. In the case of hospitalisations, rural areas seem to hold out for public health services, perhaps again reflecting the small gains of NRHM, though urban areas are increasingly shifting towards private hospital care, which the recent government-sponsored health insurance schemes are encouraging and supporting for those below the poverty line.

There is an small but interesting change to note in the 71st round of NSSO data. Where out-patient care is concerned, over the last two decades, there has been a small upward trend in public facility utilisation, especially in rural areas. This reflects the impact of the NRHM. The private sector appears to have reached saturation in provision of out-patient care, but also perhaps because of new medical technologies and diagnostics has probably become less affordable for the poorer quintiles.

In urban areas though, the same data says that across two decades, there has been a shift towards increased use of the private sector for hospital care. This is due to poor investments in the public health sector as well as an expansion of health insurance schemes, including government-financed health insurance for the poor that directs most patients to private hospitals.

Further evidence of the government’s disinterest in healthcare and consequent move towards privatisation is provided by budgetary cuts in other components of public health programmes. The Reproductive Child Health flexipool, which is mostly for immunisation and linked to reducing maternal and child mortality, has declined by 30%, from Rs 7,545 crore in 2017-18 RE to Rs 5,253 crore in 2018-19. Also, the communicable diseases flexipool, which is critical for primary healthcare and affects the poor, has also declined by 27% from Rs 2,648 crore RE 2017-18 to Rs 1,928 crore in 2018-19. How will the government meet its sustainable development goals if these key programmes are choked of resources? The 2018-19 Budget is a clear prescription for the decimation of primary healthcare, which was otherwise reviving with some efforts under the NRHM.

Ravi Duggal is country coordinator of the International Budget Partnership, and a health researcher and activist.

India’s Degrading Journo-Murder Indicator
2G scam: CBI institutes inquiry against Tata over alleged illegal bidding
India - UID Dilemma isn't about those who enrol in Aadhaar, but those who don't
Everyone from Obama to Naxals will play a role in the capital's AAP vs BJP fight