According to one story, there were always men and women coming to Haridwar in the month of shravan. They would take a dip in the river and offer Ganges water in the local Shiva temples. Then someone got the idea of taking the water back all the way home. Over the next few years the trend caught on, and became what it is now: a massive gathering-on-the-move, principally attracting millions of young Hindu men.

The roots of the annual kanwariya big bash don’t really matter anymore. What matters are its broad contours. One hears of the odd ageing devotee with blistered feet, actually walking long distances, carrying an urn of holy water, but for the most part the kanwar yatra has become one massive rave where Hindu youth can let off steam under the guise of religion.

Hinduism must be one of the most laddish religions in the world. The chillum-smoking, booze-swilling kanwariyas are evidence that young Hindus love nothing more than wearing saffron-coloured bandanas, hopping on their bikes and creating mayhem. Drunk, stoned, fuelled by testosterone, they plough through our cities like marauding armies.

During 1992, just before the Babri Masjid came down in Ayodhya, the streets of Allahabad were full of middle class young men on motorcycles screaming “Mandir wahin banayenge (We shall build the temple there). One of them was Anuj Ahuja, a sixteen-year-old schoolmate of mine who had turned saffron with a vengeance. The Bruce Springsteen and the E-Street band poster in his room was replaced with one bearing the legend “Om”. The next day, with the kind permission of his parents, he rode out with the mob. After more than fifteen years, he still remembers “those days” with the same fondness with which some might recall a rare vacation. What he loved most was the sense of power: “For a few days we could do as we wished, ride our bikes as fast as we felt like. It was pure joy.” 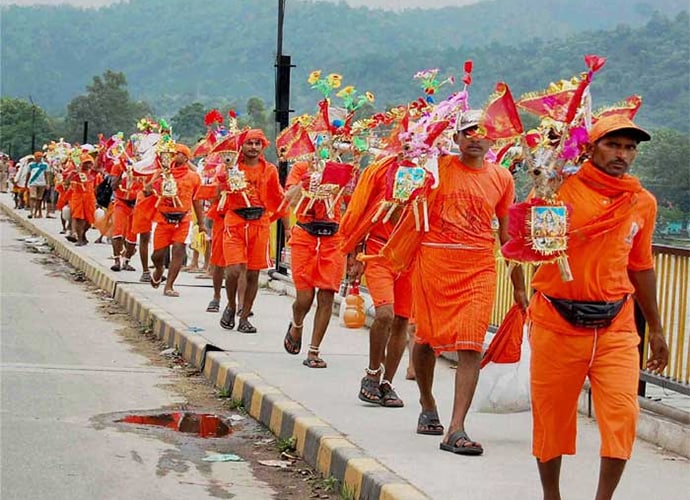 The same laddishness is on display during festivals. During Ganesh Visarjan in Bombay, hundreds of young men spill out into the streets, bringing the city to a standstill. Organisations like the Shiv Sena have actively promoted youth clubs and organised activities for the adolescent Marathi manoos. It’s these lads then who are encouraged to create trouble. They are the ones who go around digging up cricket pitches, disrupt art exhibitions (the ones that demean Indian culture in their eyes) and harass unsuspecting couples on Valentine’s Day.

In parts of Himachal, lads’ armies stop cars and extract “donations” in the name of the Chamunda Devi temple. In our cities, most of us are familiar with dodgy-looking men who turn up at our doorsteps asking for chanda (donations): “We are organising a religious function. Please give us a donation.” When you refuse you can feel the air turn.

Holi is when Hindu laddishness reaches its high point in small towns. Men with fake gold chains and painted fingernails go around stringing loudspeakers on electricity poles. On the big day, as middle class India retreats inside the safety of its homes, the lads take over the streets.

I wonder why Hindu men behave in this peculiar fashion. Is there something in the religion which encourages such behaviour? Or has it something to do with the way our society is structured?

Millions of young men and women in small towns across the country lead enormously stifling lives. They live in joint families. Casual sex, alcohol and discotheques are a strict no-no. You are allowed few choices. You are allowed a few things, though: weddings, television, and an endless supply of farty snacks: Haldiram’s bhujiya and Kurkure. The more enterprising ones might sneak off to the paan shop down the road for a surreptitious cigarette, always followed by a Chlormint to kill the smell. Your mother wants the best for you, and you don’t want to let her down. So you allow yourself one small indulgence, then mask it.

Rule-bound for most of the year, you need outlets, avenues for letting off steam. How do you do this? The conservative background you come from offers only one option: religion. Once you are clad in an orange Yogi tee everything is allowed. Seen in this light, the modern kanwaria spectacle is really not so much about Hinduism as it is about boys and their bikes. The girls, of course, have to stay at home.

This though is true only to an extent. Over the last few years, the kanwariya gatherings have become bigger, brasher and louder. At the moment, it is more like a meeting of biker gangs, the LGBT Pride March, the poor man’s Glastonbury and the Notting Hill Carnival.

Like in the Carnival, the kanwariyas now move in procession with trucks loaded with booming sound systems, on-board DJs and powerful generators. Like the LGBT march, this march is also about asserting one’s identity, which is aggressive male Hindu. In the evenings, there are “melas”, which resemble a rave on a Goa beach.

The music has changed too — Bollywood remixes have made way for foreign beats that are coming straight out of Goa psytrance. English-speaking India no longer has a monopoly on this genre; it’s been appropriated by a DJ Rajesh. The DJ mixes are interspersed with calls to Hindus to rise up to the “teesra mahasangram”, “Pakistan murdabad” and slogans about the glory of Hindustan. It’s on Instagram for the world to see.

While the Notting Hill Carnival lasts an afternoon, its saffron version continues for almost a month, throwing life out of gear in town after town. I live in Dehradun; the route between here and Delhi is badly affected during the kanwar yatra.

Earlier, if the “believers” spilled over from Haridwar and into town, the shopkeepers in Mussoorie would turn them away from the Mall Road. These days, in Mussoorie, the shopkeepers are busy conspiring to throw Kashmiri colleagues out of the picturesque hill station. The boys on bikes have a free run of the place.

There is no doubt that in the current political climate the kanwariya feels emboldened. It’s his government in power, all the way from Uttarakhand to West UP, right to the doorstep of Delhi. No surprises then that in Greater Noida, all vendors, dhabas and restaurants selling fish, chicken, meat and eggs were ordered to be shut down by the administration for a week.

29-year-old Deeptanshu Thakur, a Dehradun-based artist, recently drove from Delhi to Dehradun. All the standard pit stops on that route, like the legendary Cheetal Grand and McDonald’s, had downed their shutters. The dhabas have overnight changed and repainted their names — almost every other dhaba is now called Shiva. Massive hoardings along the way, put up by the Yogi government on the tax-payer’s money, extend the kanwariyas a hearty “swagatham”.

One can buy the Indian tri-colour along the entire stretch of 280 kilometres between Delhi and Dehradun. Says Thakur, “Even as a Hindu male driving at night I felt hardcore fear. I didn’t see a single woman or Muslim. The 15-kilometre-stretch between Modinagar and Muradnagar took me five hours to cover. Some of the red-eyed bikers looked barely fourteen or fifteen.”

The India tri-colour is a new addition, sending out a signal no one can miss or mess with: India is Hindu Bharat. One can buy small flags as well as extra-long ones, which are held and carried by trains of plodding kanwariyas. As the kanwariyas stop and party in towns like Muradnagar, Modinagar and Purqazi, the underlying message to the minority community is clear and unambiguous. Make no mistake. We are here. This is our land.

If any other person did what the kanwariyas do, he’d be arrested immediately. What are these guys on? Have any of them been subjected to a blood test? Which organisation is pumping money into this? We have some idea.

What we do know as a certainty is that the formula is working—an estimated 20 million are reported to have carried the kanwar between Delhi and Haridwar last year. (The figure comes from a Hindustan Times story but seems wildly exaggerated. One in every five Indians is not a kanwariya; figures are often inflated by the administration to get more government funds.)

And the formula is a potent mix of masculinity, nationalism, saffron Hindutva, strong beer, chillums, motorcycles, trucks, trishuls, hockey sticks and electronic dance music imported from the west. Hindutva’s women however are entirely missing, even as local papers report that the flesh trade booms in Haridwar during the season. As any professional event organiser will tell you: a stag party ain’t a proper party but a sausage fest.