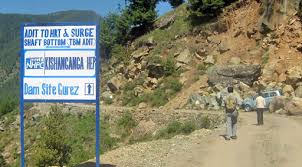 The International Court of Arbitration at The Hague Monday ruled in favour of India‘s position on the diversion of Kishanganga water, setting aside objections by Pakistan that has halted work on the 330 MW Kishanganga hydel project in Jammu & Kashmir.

Islamabad took New Delhi to the court of arbitration in the summer of 2010, disrupting Indian plans to divert water from the Kishanganga into the Bona Madmati Nallah. Islamabad said the diversion violated provisions of the Indus Waters Treaty of 1965, a claim that India refuted.

While the broad verdict is in India’s favour, officials were learnt to be going through the detailed order to check the fine print. The verdict is likely to mean a green signal for the Kishanganga project. Pakistan had earlier taken India to a neutral inter-nations expert for resolution of a dispute on the Baglihar dam, which too had gone in India’s favour in 2007.

In a statement issued late on Monday evening, Ministry of External Affairs spokesperson Syed Akbaruddin said, “The award of the court of arbitration at The Hague today reaffirms the validity of India’s position… It highlights once again that India is adhering to all the provisions of the Indus Waters Treaty.”

Former Central Water Commission chairman A K Bajaj, who was involved with the process of dispute resolution from the beginning and had been engaged by the government even after retirement, said, “It was a major point that Pakistan was opposing on various frivolous grounds and it is good that the hon’ble tribunal has decided the matter by correctly interpreting the relevant provisions of the Treaty.”

Former water resources secretary Dhruv Vijay Singh, who spearheaded the Indian case, told The Indian Express, “India always believed in abiding by the provisions of the treaty. And we will continue to do so.”

The arbitration went through tumultous phases after New Delhi and Islamabad failed to agree on the nomination of three neutral judges. Both sides invoked a provision in the treaty under which UN Secretary General Ban Ki-Moon had to nominate Stephen M Schwebel, a former president of the International Court of Justice, as the head of the seven-member arbitration bench.

The technical expert was nominated by the rector of London’s Imperial College of Science and Technology, and the legal expert was recommended by the Lord Chief Justice of England to complete the three neutral members, including the chairman, on the bench.

The bench, on which the two countries nominated two members each, visited both sides of the LoC before beginning a detailed hearing which concluded on August 31 last year.

Goa ‘beats’ Karnataka in illegal mining
State blatantly violating SC order in #Aadhaar case #UID
Amazon Echo secretly recorded a family's conversation and sent it to a random person on their contac...
How have these corporations colonised our public life?