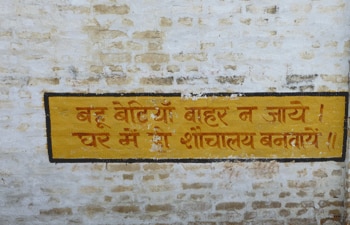 According to a report, more than 70 per cent families have no access to toilets in Madhya Pradesh. (For representation only)

A 27-year-old dalit woman has agreed to return to her husband‘s home at a village in Dewas district, after he promised before a court to get a proper toilet constructed at his place.

Savita, who got married to Mundlaana village resident Devkaran Malviya (30) about seven years back, left her husband’s home along with her two children three years ago and went to live with her parents as she felt a sense of shame at being forced to answer the nature’s call in the open.

Later, she filed a case in a local court seeking monthly maintenance from her husband. During the course of the case, it came to light that she had a dispute with her husband over their being no proper toilet facility in his house.

She told the magistrate court recently that she would not go to her husband’s home unless a proper toilet was built there.

Devkaran has assured the court that he would ensure a proper toilet at his home before January 10, which is the next date of hearing in the case.

The woman has agreed to return to her husband’s home after he ensures proper toilet facilities.