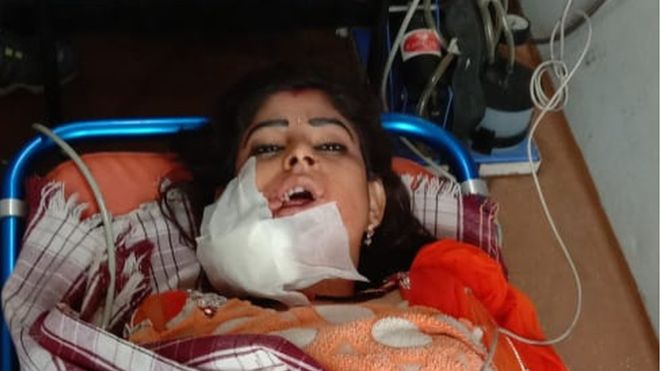 An Indian dancer has been hospitalised after being shot in the face because she stopped performing at a wedding.

In a video of the incident, the woman is seen dancing on a stage. She pauses, a gunshot is heard, and the woman falls down while holding her face.

Police told the BBC that they have identified the shooter in the video, who is on the run.

The incident happened during a wedding celebration on 1 December in a village in Uttar Pradesh state.

However, it only came to light days later, after the video was widely shared on messaging platforms.

“The suspect is on the run but we are confident that we will arrest him soon,” police told the BBC.

Wedding violence is a common phenomenon in certain parts of the country, where many guests carry guns – mostly to fire in the air to celebrate the occasion.

However, with revelries getting out of control, violence is not uncommon.

A similar incident occurred in 2016 in the northern state of Punjab, when a pregnant woman was killed after she was shot in the stomach while performing a dance at a wedding.

Other tragedies happen by accident.

In November 2016, a gun-toting self-proclaimed god-woman killed three people including the groom’s aunt, after firing celebratory shots at a wedding in the northern state of Haryana.

In 2018, Punjab police arrested a man after he allegedly shot dead his neighbour by mistake during a pre-wedding party.

He had fired shots into the air to celebrate his daughter’s upcoming wedding. But one of the bullets hit his female neighbour in the forehead, killing her instantly.

Man who married Dalit woman dies on visit to attend grandad’s funeral
Why Facebook Failed Censorship Test
The challenge of rooting out Weinsteins from our workplace #Vaw
Chhattisgarh Killings What If They Were/Were Not Maoists?