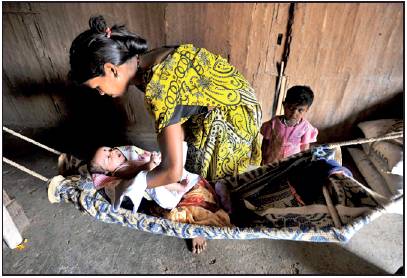 The ten years between NFHS 4 and NFHS 3, saw the ambitious NHM and its crucial rural segment, the National Rural Health Mission (NRHM), unfold, thus making the latest survey a comment on the Mission’s outcomes.

New Delhi: The final report of the National Family Health Survey (NFHS) 4, published January 12, is a stamp of approval for the National Health Mission (NHM), according to some in the public health sector.

The ten years between NFHS 4 and NFHS 3, saw the ambitious NHM and its crucial rural segment, the National Rural Health Mission (NRHM), unfold, thus making the latest survey a comment on the Mission’s outcomes.

A health researcher, with over ten years of experience in the field, explained to News18 that some of the data showed how social interventions of the NHM, instead of just direct health interventions, worked to better India’s key indicators.

This solved the conundrum of lowered use of contraceptives and lower fertility rates that puzzled public health professionals, as seen in fact sheets published much before the report.

Data from fact sheets showed that the use of contraceptives or any family planning methods had gone down from 56.3 percent to 53.5 percent. Use of contraceptives has, traditionally, inverse relationship with total fertility rates (TFR), however, the TFR has reduced to 2.2 children per women from 2.7 in 2005-2006. The successful lowering of TFR, and 1 percent reduction in the unmet family planning needs, can be ascribed to literacy, which has gone up among women.

The percentage of women with ten or more years of schooling has gone up substantially, from 22.3 percent to 35.7 percent.

Women with no schooling have an average 3.1 children, compared with 1.7 children for women with 12 or more years of schooling.

“India no longer has a population explosion problem,” said the researcher speaking anonymously, “as the TFR of 23 states and union territories is below the replacement rate of 2.1. This replacement rate is the level of fertility at which a population exactly replaces itself from one generation to the next.” Sikkim, the report shows, has gone down to 1.2 children per women.

Most women, added the researcher, were having babies when they wanted to and were making some interventions to prevent unwanted pregnancies, as the difference between the two is down by 50 percent. The survey shows that 91 percent of births in the five years before the survey, were wanted.

It’s not just the direct interventions aimed at population control – such as family planning methods and contraceptive kits – that are working. With increasing literacy, the resultant awareness is empowering women to make sexual health and reproductive choices.

The NHM was launched in 2005 with a mandate to set up accessible health infrastructure and to move a certain part of healthcare from the hands of doctors to those of frontline health workers i.e. ASHAs, responsible for monitoring the health of all households in their area and for spreading information and awareness. The positive indicators show that these two have, to a degree, succeeded.

Where TFR numbers are high, such as Uttar Pradesh and Bihar, they are so because of lack of access and marriages of girls under the age of 18, who are known to have very little control in reproductive choices. There is a high rate of teenage pregnancies in rural areas, 1 out of 10 teenage wives between the ages of 15 and 19 have begun childbearing. Though the number of teenage pregnancies is down from NFHS 3 – 16 percent to 8 percent – there are still enough women without access to or a choice in safe reproductive healthcare.

NHRM facilities have also made a large number of institutional births a reality, a statistic that stands out in the report. The percentage of women who deliver babies in health facilities has jumped from 38.7 percent in NFHS 3, to 78.9 percent. Public hospitals and healthcare centres have admittedly had problems with the quality of care, and the treatment meted out by staff to poor patients. However, medical care also ensures that women don’t die from haemorrhaging and babies from sepsis and asphyxiation, the most common causes of deaths. Hence, the infant mortality rate has come down to 41 deaths per 1000 live births, from 57.