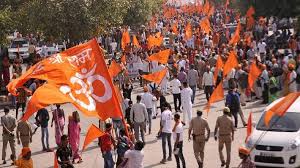 “The nature of Keshap’s meeting with the RSS came across as a photo-op, it was public, and it platformed and promoted a violent, fascist (and many call it ‘terrorist’) organization which serves as the greatest enemy to religious freedom that Indian citizens face today,” declared six Indian-American organizations in a 25 September 2021 joint statement denouncing US Ambassador Atul Keshap’s recent meeting with the head of India’s Rashtriya Swayamsevak Sangh (RSS) paramilitary.

Keshap continues to find himself in ever hotter water as controversy increasingly rises around his 8 September visit with RSS Chief Mohan Bhagwat. The latest development sees Indian diaspora groups — including three of the largest Indian-American Muslim associations — calling for his resignation or removal “from any and all postings within the US State Department” in reaction to the meeting.

“Keshap’s meeting with RSS Chief Mohan Bhagwat seemed to place a stamp of approval on and act as an endorsement of the RSS — which is exactly how the action is now being interpreted by the paramilitary itself,” says the joint statement, which was signed by groups such as the Indian American Muslim Council (IAMC), Association of Indian Muslims of America (AIM), and North American Indian Muslim Association (NAIMA). Previously, AIM Executive Director Kaleem Kawaja — comparing the RSS to the Nazis — argued that Keshap’s meeting “lowers the prestige and image of America as a nation for liberty and equality” and that the ambassador had “disqualified himself from serving as a representative of the United States.”

According to the statement, “Keshap’s endorsement of the RSS serves to embolden its agenda to crush any and all dissent.” The statement continues:

Furthermore, we are worried that Keshap’s meeting will also embolden the international network of RSS support groups, many of which operate on US soil. These especially include the Overseas Friends of the BJP (which only last year registered as a Foreign Agent after operating for nearly 30 years) and the Hindu Swayamsevak Sangh (which, as the US wing of the RSS, maintains close ties with its mother organization, including conducting strategy and training sessions for members both in the US and in India). These groups and their sympathizers appear to bear some responsibility for the wave of intimidation, rape threats, and death threats issued to many participants in the recent US-hosted “Dismantling Global Hindutva” conference which took place just two days after Keshap’s meeting.

This latest development in the Keshap controversy follows on the heels of a webinar in which six Indian-American groups denounced the ambassador’s meeting with RSS, a protest against him in California, an online petition for his resignation/removal which has garnered over 2,200 signatures, and remarks by a representative of Human Rights Watch who called the meeting “troubling,” and “disturbing,” and compared it to if the US Ambassador to Germany in 1933 had attended Nazi rallies at Nuremberg.

The full joint statement, including all signatories, can be viewed here.