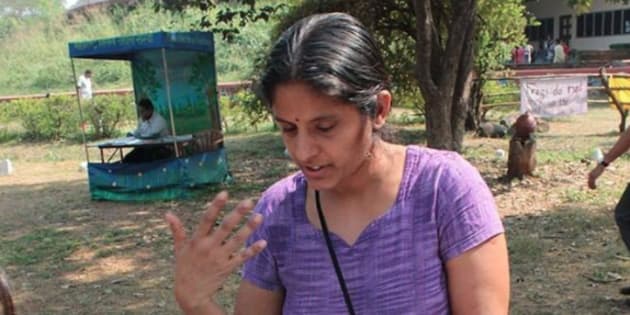 NEW YORK — An Indian-American woman, who along with her husband had been the inspiration behind Shah Rukh Khan‘s film Swades, was stopped and asked by police if she was in the US “illegally”, an incident which comes amid rising fears over President Donald Trump’s immigration policies.

Aravinda Pillalamarri, 47 was walking in her Bel Air neighbourhood in Maryland on the morning of December 21, a routine with her, when she said she was stopped by a Bel Air Police Department officer, The Baltimore Sun reported.

Pillalamarri, who was born in India but moved with her parents to the US when she was young, was asked by the police officer about what she was doing and she replied that she was walking.

The officer continued to ask several questions. When she asked why the officer was asking her so many questions, he replied because someone had called police.

“Walking while brown?” Pillalamarri then asked the officer.

The report said a police supervisor arrived at the scene and began to question Pillalamarri more aggressively. The supervisor told her she wasn’t free to leave because she “was under criminal investigation.”

He asked why she didn’t have an identification with her.

“Why don’t you have ID?” she said the supervisor asked her. “Are you here illegally?”

Once the officers had run her name through their computer system, Pillalamarri said, she was allowed to leave and walked to her home, just a few doors away.

Pillalamarri, has lived in Bel Air for more than 30 years and is a US citizen. Her parents came to America from India when she was a baby. She went to Bel Air High School.

“Only when the supervisor asked ‘are you here illegally’ did my sense of colour, and of being unequal, come forth and my interest in my civil rights take a back seat to get out of the situation safely,” she was quoted as saying.

“Public safety does not need to come at the cost of civil rights,” she added. “I am sharing this incident here not to ask anyone here to find fault or take sides. We are all on the same side and can use this as an opportunity to learn and improve. The responsibility to uphold civil rights is one that all of us share, and we need to do our part and also expect the police to do their part.”

Pillalamarri said she walks in her neighbourhood nearly every day. She related her story to members of the Bel Air Board of Town commissioners at their town meeting on January 17, not to get anyone in trouble but to bring to their attention the need to uphold everyone’s civil rights.

Colour was not on her mind when she was first stopped, Pillalamarri told the commissioners.

Bel Air Police Department Chief Charles Moore, who’s led the agency since September 2015, said he is not sure if his department has a policy specifically dealing with questioning a person’s immigration status, but added, “If there isn’t one, there will be.”

Pillalamarri along with her husband Ravi Kuchimanchi had been the inspiration for the Shahrukh Khan-starrer ‘Swades’ in which he returns to his village from the US and then brings electricity to the remote area.http://www.huffingtonpost.in/2017/01/29/indian-american-who-inspired-swades-detained-questioned-about-i/?spot_im_reply_id=sp_cfiP5HzG_amp-21702382_c_bYqPnE_r_ADRVGK

Venezuela elderly feel ‘sentenced to euthanasia’ under coronavirus quarantine
Fact Finding by CDRO and WSS - Killing of Anti-Sterlite Protesters in Thoothukudi
“In our 47 years with the tribals we have never come across rape; they may go hungry but never steal...
Sanjay Deshmukh becomes first Mumbai varsity V-C to be sacked