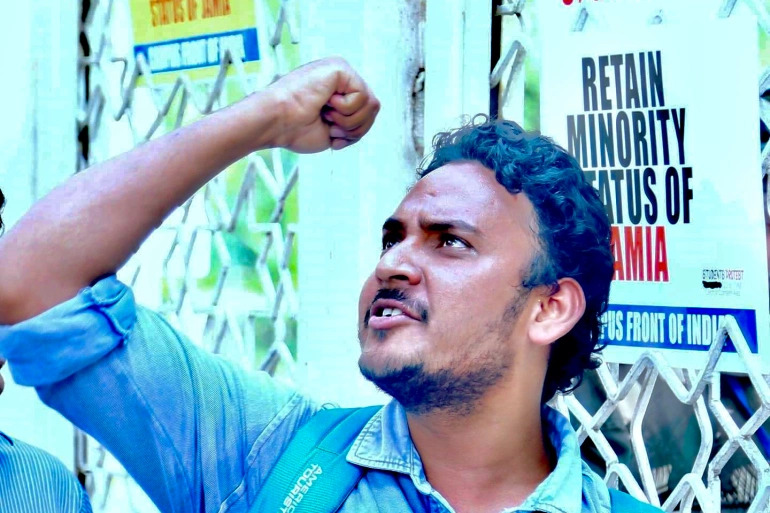 Student activist is accused of ‘conspiracy to cause caste-based violence’ but his family and lawyer say he has been made a ‘scapegoat’.

On October 5 last year, Masud Ahmed was travelling through Mathura, a town in the northern state of Uttar Pradesh, when a team of police officers waved him over.

The officers, who were manning a checkpoint, asked him and three co-passengers questions including their names, affiliation and purpose of travel.

Wearing a grey button-down shirt, a blue hat with his beard trimmed short, the 26-year-old student activist told the officers they were on their way to Hathras, a small town in Uttar Pradesh state 43km (26 miles) from Mathura and about 200km (124 miles) from the capital, New Delhi.

The four were going to meet the family of a 19-year-old Dalit teenager who had been gang-raped by four Hindu upper-caste men three weeks before their journey.

Formerly referred to as “the untouchables”, Dalits are on the lowest rung of India’s complex Hindu caste hierarchy and have faced oppression by Hindus from more privileged castes for centuries.

The woman was dragged from a field and raped, suffering grievous injuries. Her tongue was cut and her spinal cord broken due to the assault.

On September 29 last year, she breathed her last in a hospital in New Delhi.

The same night, the Uttar Pradesh police secretly cremated her body, without the consent of her family, who said they were locked in their houses during the cremation.

The Dalit woman’s rape and subsequent burning of her body by the police triggered widespread outrage, with demonstrations held in different parts of the country against the right-wing Bharatiya Janata Party (BJP) government in the state.

Ahmed and the three others, including journalist Siddique Kappan, decided to go to Hathras to meet the victim’s family.

But the four men were stopped by the police and asked to leave the car, then they were taken to a local police station and charged with disturbing public peace, a bailable offence.

My son was made a victim because the arrest of a Muslim makes a good headline.

But that was only the beginning of their ordeal.

“He was deeply stunned by what was done to that girl. All he did was to visit her family in solidarity and share their pain as a student activist,” Ahmed’s brother Monis Ahmed Khan, 32, told Al Jazeera.

Ahmed, a resident of Bahraich in the northeastern part of Uttar Pradesh, is a student leader at the Campus Front of India (CFI).

CFI is the student wing of Popular Front of India (PFI), a Muslim organisation with a pan-India presence, is often accused by the Indian authorities of having “extremist” links, a charge denied by the group.

The others arrested with Ahmed were Atiq-ur Rehman, 27, and Mohd Alam, 30, both from Uttar Pradesh, and Kappan, 41, who hails from the southern state of Kerala.

It took Khan two days to secure the bail papers for his brother’s release, but the police had other plans.

On October 7, the four men were accused of “conspiracy to cause caste-based violence in the state” and charged with sedition and the Unlawful Activities (Prevention) Act (UAPA), a stringent anti-terror law that allows detention for up to 180 days without charges.

“The news shattered us all. He was not a criminal or a terrorist, but just a student activist who was fighting for injustice,” Khan told Al Jazeera.

They now fear it might be too late for him to realise his dream before he could prove his innocence before the country’s painfully slow judicial process.

Eight years ago, Ahmed moved to Delhi to pursue a masters degree in journalism at Jamia Millia Islamia (JMI), a prestigious university founded by Muslims during India’s freedom movement against British rule.

Soon, he found himself involved in student politics on campus.

According to Safoora Zargar, a student leader and research scholar from JMI, apart from studying, Ahmed would spend most of his time communicating student grievances to the university administration.

“He was a leading voice that fought for the rights of students and always stood with what was right and just, without fear of consequences,” Zargar told Al Jazeera.

Zargar was also charged under UAPA and jailed for weeks last year – despite being pregnant – for participating in protests against a controversial citizenship law passed by Prime Minister Narendra Modi’s government in 2019.

Ahmed would visit slums around his university to encourage children to attend school and help them fill scholarship applications to pursue higher studies.

In August 2016, he rejoined JMI for another masters programme in public administration.

The same year, Modi’s government announced its plans to rescind JMI’s minority status, which allowed the university to reserve 50 percent of its seats for students from the Muslim community, which has low representation in India’s educational system.

As anger over the move mounted, the university students launched a protest movement with Ahmed as one of its leaders.

In 2017, he was involved in another round of protests calling for the reinstatement of the JMI students’ union, which was banned by the university administration in 2006.

“He was a strong proponent of having a democratic space for students on campus to express their grievances and would always lead from the front,” Aman Qurashi, a 23-year-old student activist from JMI told Al Jazeera.

After finishing his second masters in 2018, Ahmed took a break from campus politics and started preparing for the prestigious Indian Administrative Service examination.

He even rejected an admission and scholarship offer for an MBA from Cardiff Metropolitan University in the UK.

“He wanted to serve the poor and the marginalised,” Harmeet Kaur, Ahmed’s JMI classmate and now a student at Cardiff, told Al Jazeera.

Chand Bibi, Ahmed’s 51-year-old mother, has been glued to her prayer rug since October, seeking divine intervention. She desperately waits for Mondays when she speaks to her son on a one-minute phone call allowed by the jail authorities.

According to Bibi, Ahmed and the three others were used as “scapegoats” to divert people’s attention from the Uttar Pradesh government’s controversial handling of the rape and murder of the Dalit woman.

“My son was made a victim because the arrest of a Muslim makes a good headline. Everything was done to shift the focus from the Hathras case,” Bibi told Al Jazeera.

Ahmed’s lawyer Saifan Shaikh said most of the case built against him is based on his activism against the BJP and its ideological mentor, the Rashtriya Swayamsevak Sangh (RSS), including his critical Facebook and Twitter posts.

“His student activism and being vocal against the government is also the main reason for his incarceration,” Shaikh told Al Jazeera.

He wanted to serve the poor and the marginalised.

The lawyer also accused the police of torturing Ahmed in custody.

“Superintendent and deputy superintendent-rank police officers kicked, slapped and abused him. He was told Muslims deserve to be jailed,” said Shaikh.

On April 2, the Uttar Pradesh police’s special task force (STF) filed a 5,000-page charge sheet in a Mathura court against Ahmed, Kappan, Rahman, Alam, and four others who were added later to the case.

The lawyers for the accused have yet to receive a copy of the charge sheet and have only been provided with a 22-page brief. In the brief, seen by Al Jazeera, 44 out of 55 people named as prosecution witnesses are police officers.

A bank transfer of 2500 rupees ($35) in 2018 is being cited as alleged proof of Ahmed’s “direct connection” with the PFI. His proficiency in Malayalam, a language spoken in Kerala, is cited as the reason he was seen as a reliable person for the Muslim group.

“The police’s intention is to cook up a story and make sure he suffers behind the bars for a long time,” Shaikh said.

Fears over safety in jail

Ahmed’s family fears for his safety in jail. During a phone call in March, he told them he feared a physical attack from prisoners who were moved into his jail unit.

“Due to his Muslim identity and charges levelled against him, he is seen as an anti-national and there were attempts to assault him. He was scared that they might put something in his food to kill him,” Ahmed’s brother Khan said.

He wrote several letters to state government officials, including the director-general of police, Hitesh Awasthy, to ensure his brother’s safety, but did not receive any response.

Shaikh also accused the jail authorities of “continuous mental abuse and treating him like a slave”. He said the jail staff denied Ahmed books, or food on time, forced him to do hard labour, and sometimes put him in isolation.

“They are violating all his human rights,” Shaikh told Al Jazeera.

Separation from her son is taking a toll on Bibi’s physical and mental health, but she says that will not dampen her resolve to prove her son’s innocence.

“He stood up against injustice,” she said amid tears. “And now I won’t allow anyone to do injustice to him.”SOURCE: AL JAZEERA