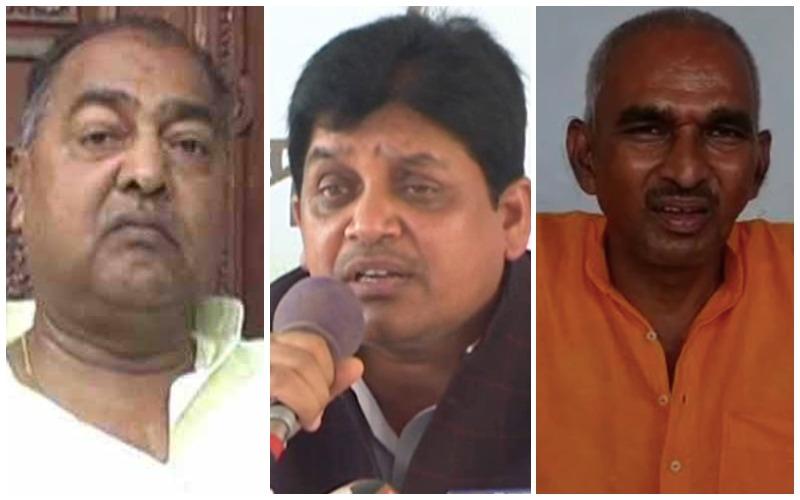 The only harrowing thing comparable to the brutality of crime in the Hathras case is the morally bankrupt reaction to it from certain politicians. In the wake of mounting anger towards the Uttar Pradesh government and police after a 19-year-old Dalit girl reportedly succumbed to gangrape injuries by upper-caste men, politicians across the board have taken centre stage to offer their two bits to the case now surrounded by controversy. While some leaders are demanding swift action from the ruling authorities, some others are taking the opportunity to ceremoniously spew misogynistic remarks teetering towards victim-blaming.

In the most recent statement, BJP leader Ranjeet Bahadur Srivastava from UP’s Barabanki reportedly said about the Hathras victim, “The victim must have called the boy to the field because they were having an affair. This news is already out on social media and news channels. She must have gotten caught.” While it is another matter that Srivastava has over 44 criminal cases against him, his comments on the Hathras case are outrageous and outright misleading. Should politicians be allowed to run amok with such blatant victim-blaming? Why are their overhead leaders not condemning them? Moreover, do we even want leaders like him to reek sexism

Srivastava can be seen saying all this on a video doing the rounds on Twitter. Watch it here:

Careless Claims By Leaders Will Make The Road To Justice Longer

We earlier reported how the top female politicians of the country had maintained an embarrassing silence during the immediate aftermath of the Hathras case. It was off-putting enough that they took a long time to condemn the crime, and now, in their rule, other men of political stature are being allowed to blame the Dalit woman who died.

It doesn’t seem like a mere coincidence that Srivastava’s comments directly supplement the counter-narrative being run by the UP authorities to quash the widely reported narrative of rape in Hathras. Amid a messy blockade of media and opposition leaders, the UP Police ADG had first publicly stated that forensics allegedly did not show the Dalit girl had been raped, despite her dying video statement attesting to it. Then, the authorities claimed that a false caste colour was being given to the case. They have now claimed an “international plot” meant to defame UP Chief Minister Yogi Adityanath by highlighting the Hathras case.

How dangerous is this suppression of what’s true and what’s not? Since the case has been handed to CBI, shouldn’t authorities refrain from making baseless remarks in public?

Aren’t their statements discounting the gravity of rape crimes in India? Won’t their contesting claims make the road to justice longer for the Hathras victim and the hundred other rape cases that go unreported everyday?

Other Sexist Statements By Leaders

Srivastava is not the only one casting aspersions on the Hathras victim’s character. Another BJP MLA from UP, Surendra Singh, faced public ire for saying that rape cases in the country can be prevented if only good “sanskaars” and “values” were instilled in daughters of India. In the aftermath of the Hathras incident, ANI quoted him saying, “Incidents like these can be stopped with help of good values, na shashan se na talwar se. All parents should teach their daughters good values.”

Meanwhile, an old statement by the UP CM himself surfaced amidst the Hathras outcry, pointing out the misogyny inherent in the head of state. In a clipping of his essay published in TOI, Yogi Adityanath spoke about the role of women in society, and how they are “not capable of being left free or independent” lest their energy becomes “worthless and destructive.”

Politicians from other parties too have been excessively lax in their outlook towards crimes against women. Shiv Kumar Dahariya, Congress minister from Chhattisgarh, termed the Balrampur rape case a “small” incident as compared to Hathras. This mentality of weighing the horror between two crimes to further political agenda is what has been seen even in the public’s reaction to these rapes.

Pitting one state against another, people on social media have pointed out that UP shouldn’t be criticised because rapes are happening in other states like Rajasthan, Haryana, as well.

Politics aside, should the prevalence of other crimes be offered as justification to overlook one crime in focus?

Instead, does it not give a stronger cause for strict action to be taken against all such crimes, regardless of where it may be happening?

Hathras should not become a political battleground. It requires urgent action. It requires leadership free from hate, agenda, and fake news-mongering, whichever side of the political spectrum that is coming from.

Aside from bringing the Dalit victim justice, authorities must now also focus on bringing to book these politicians making detrimental remarks about her in death. India is still a democracy, last I checked, and these are leaders we have elected to serve the country and us. For how long should they be allowed to character assassinate women and get away with it? It’s high time they claimed accountability for their words.