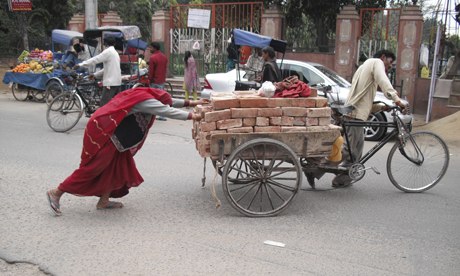 India’s lowest castes, such as the Dalits, are often forced into dangerous work, despite a number of affirmative action initiatives. Photograph: Amar Singh/Alamy

Campaigners from south Asia have welcomed an EU resolution passed on Thursday against caste-based discrimination, which they hope will help to push the issue on to the agenda at trade talks between the EU and countries like Nepal, India and Sri Lanka.

The International Labour Organisation estimates that the overwhelming majority of bonded labour victims in south Asia are from lower castes, with forced and bonded labour particularly widespread in the agriculture, mining and garment production sectors. Some of the companies involved in these sectors supply products to multinationals.

Campaigner Manjula Pradeep, from the Indian rights organisation Navsarjan, says that, after working hard to raise awareness of discrimination against low-caste Hindus known as Dalits, finally seeing the issue discussed at such a high level feels like a reward. “When we started the process of lobbying the European parliament in 2007 we had to explain what [caste discrimination] was. Now we don’t have to say what it means to be a Dalit, so it’s a reward, but we still have to do a lot of work.”

Some countries in Asia have taken steps to tackle the issue; India has affirmative action programmes to support Dalits. Inbuilt prejudices, however, are preventing long-term change, Pradeep says. “When we were listening to the statements of the European parliament, I thought about my own members of parliament and I wonder if they are ready to speak on this issue. Very few are ready … they don’t want to address it at a larger level, most often these issues related to caste have never been addressed at a national level in our country.”

Caste systems are common in much of south-east Asia. Campaigners estimate 260 million people around the world are affected. Castes divide people into social groupings; those in the lowest castes are regarded as unclean and are often forced into unpleasant and dangerous work.