It’s 15 August 2016, and in India we’re celebrating the 70th anniversary of our independence. Flags wave. There’s the usual huge Independence Day parade in the capital. 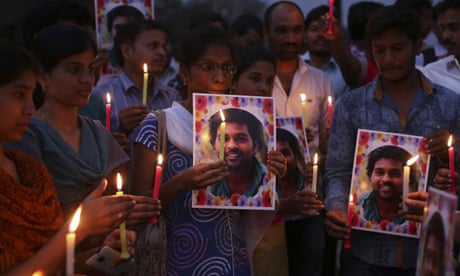 India’s caste system: ‘They are trying to erase dalit history. This is a martyrdom, a sacrifice’

But the celebrations bring out both pride and anguish. All of us imbibed the “freedom struggle” stories as children. We were taught to be proud of our country’s prolonged battle against colonialism, of the martyrs who gave their blood for India. We showed the world how to shed the shackles of imperialism. And we spread the doctrine of non-violence at a time when it seemed an impossible dream. What’s not to be proud of?

But for those who work with our poorest, most marginalised groups, to ask some loaded questions is almost mandatory. What does freedom mean? Free to be mercilessly thrashed for doing a job thrust forcibly on you, such as skinning dead cows, your destiny because that’s the caste you were born into? “It’s our curse,” dalits have said to me.

As I write this, the dalits (India’s most oppressed group, our “untouchables”) are doing a special “freedom” march to Una, a small town in Gujarat where last month four young men were brutally beaten up with iron rods by a mob of cow vigilantes for skinning dead cows. These young men are from the “chamar” or leather tanning caste. Even now, if ordered to move a carcass – and that means any dead animal ranging from cows to goats to dogs or cats – they are compelled by societal norms to do so, regardless of whether they’ve earned a doctorate in economics or history. The unwritten rule: once a chamar, always a chamar. Yes, we’ve come a long way economically, but our feudal system is alive and well. And not just kicking. It’s maiming, raping and killing, too.

As millions of Indians celebrate Independence Day, the Times of India ran a story about Ovindra Pal, a dalit man who despite having a master’s in history, was forced to work in his father’s trade, skinning bovine carcasses. Understandably, Pal is bitter, as are thousands of dalits who have painstakingly inched up the education ladder but still can’t find a job commensurate with their skills and qualifications.

All Indians, whether Christian, Muslim, Parsi, Buddhist, Jain or Hindu, carry some vestiges of the caste system in them. Caste and casteism have been carried to every corner of the globe to which the Indian diaspora migrated. Our caste prejudices manifest themselves most clearly in the matrimonial newspaper columns, where prospective brides and grooms of all religions are sought for traditional marriage alliances. Caste and skin colour are the most important criteria for admitting a strange woman into that most intimate circle, the home and the family. The woman who will bring forth children to perpetuate the line must almost always be fair-skinned and of the same caste. The exceptions to this rule are very rare.

My plea this Independence Day is very basic, and echoes that of the marchers in Gujarat for justice and equality. I don’t care if people continue to choose whom they eat with or to whom they marry their daughters and sons. Change, after all, comes slowly. But we do need to stop the prevailing culture of total impunity which allows murderers and rapists of our nation’s poorest people to flaunt their crimes, knowing they can get away with anything.

In India, justice for the poor and powerless is the exception rather than the rule. Our much maligned media cry themselves hoarse, but the powerful continue to strut around their crime scenes protected by politicians and corrupt bureaucrats.

For how many centuries more will we continue to allow heinous caste crimes to go unpunished? It makes a mockery of everything our freedom fighters died for.

Must dalits fight alone? Or can decent Indians stand with them? Our more enlightened business leaders, socially conscious Bollywood actors, and our few decent politicians should organise a different freedom celebration. We can and must begin a campaign against casteism. Only then, when the medieval practice of untouchability and caste is honestly a thing of the past, can we truly celebrate India’s freedom.https://www.theguardian.com/commentisfree/2016/aug/15/india-caste-system-70-anniversary-independence-day-untouchables?CMP=twt_gu