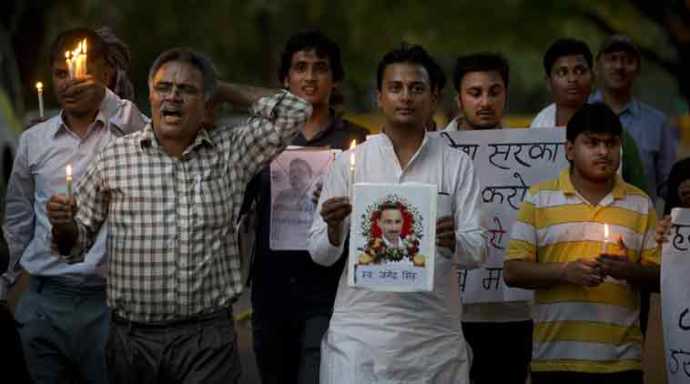 As six months of the year rolls on, India emerges as one of the worst
places for working journalists similar to the troubled nations
including Mexico, Yemen, Afghanistan and Iraq. The largest democracy
of the globe witnessed the murder of three journalists in the first
half of 2016, where the populous country lost five journalists to
assailants last year. As nobody has been convicted in all eight
journo-murder cases, the Indian media fraternity rose to the occasion
for special protection laws and also for a national action plan to
safeguard the media persons.

The first incident of journalist murder this year took place in Uttar
Pradesh, where a young scribe named Tarun Mishra was shot dead on 13
February 2016 at Gosaiganj locality in Sultanpur district. Mishra (32)
used to work for a Hindi daily named Jan Sandesh Times and he was
targeted for highlighting the illegal soil mining activities in his
district. Three motorcycle riding miscreants shot at him near to his
residential locality in Ambedkar Nagar and he succumbed to his severe
injuries in the hospital.

The second casualty was reported from Jharkhand, where a television
news channel reporter was killed by the local goons. Two unidentified
people targeted Indradev Yadav (also known as Akhilesh Pratap Singh)
at Dewaria locality of Chatra district on the night of 12 May. Yadav
(35), who used to work for Taaza News, faced the bullets in front of
the village Panchayat office and died on his way to the hospital.
Within 24 hours, the third case of journalist murder came to light
from its neighboring State of Bihar. Unidentified gunmen shot at
Rajdeo Ranjan on 13 May night at Siwan railway station locality.
Engaged with the national Hindi newspaper Hindustan in a senior
position, Ranjan (45) died in the hospital. A senior journalist with
brave image, Ranjan earned enmity with local political goons for his
reporting against those elements.

Both the incidents created instant wave of protests in Ranchi as well
as in Patna and then it spread to other parts of the country. Various
local, national and international media (rights) bodies including the
members of prestigious press clubs based in New Delhi, Mumbai, Kolkata
etc demonstrated their angers against the vicious attacks on scribes
and demanded distinctive punishment to each & every single perpetrator
of the crimes.

Shashi Shekhar, the chief editor of Hindustan narrated in his column
that ‘journalism today is amongst the most dangerous professions in
the world’, but even though people get attracted to it, as the society
needs truth and journalism is the most powerful medium to bring out
that truth.

“We have made sacrifices and we will continue to do so, till it is
necessary…The first target of this struggle will be to bring the
killers of Rajdeo Ranjan to book. Here I would like to thank friends
in the media for their united stand on the issue….Believe me, we are
nothing without your patronage. And we once again reaffirm our resolve
to continue to be your voice,” added the column.

Even the information & broadcasting minister Arun Jaitley came out
with a statement condemning the killings and twitted, “I strongly
condemn murder of journalists Rajdeo Ranjan in Siwan and Akhilesh
Pratap Singh in Chatra district. Independent investigation may be
instituted and guilty be punished.”

It may be mentioned that the robust media fraternity of the populous
country lost five journalists namely Jagendra Singh (UP), Sandeep
Kothari (Madhya Pradesh), Raghavendra Dube (Maharashtra), Hemant Yadav
(UP) and Mithilesh Pandey (Bihar) to assailants last year. Shockingly,
no one has been convicted in all cases.

Both the New York based Committee to Protect Journalists (CPJ) and
Paris based Reporters Sans/Without Borders (RSF) strongly condemned
the killings and called for an authentic investigation into the
incidents. They also expressed concerns that India is slipping down in
the media freedom parameters turning the largest democracy into a
worst place for working journalists.

Condemning the killings, the Vienna based International Press
Institute (IPI) commented that it shows the failure of the province
governments to provide basic protection to journalists to carry out
their works. The forum also called the Indian authorities to conduct a
full, swift and transparent investigation into their deaths to ensure
justice to the victim families with an aim to end a growing culture of
impunity for crimes against journalists.

According to the RSF, India continues to languish in the bottom third
of the 2016 World Press Freedom Index. Though the Indian media is
dynamic and much more capable of playing the role of democracy’s
watchdog, the number of journalists killed and the impunity for crimes
of violence against the media fraternity escalate.

Published annually by the RSF since 2002, the global press freedom
index measures the level of freedom available to journalists in 180
countries using the following criteria – pluralism, media
independence, media environment and self-censorship, legislative
environment, transparency, infrastructure, and abuses.
“Wherever they work, Indian journalists are exposed to growing
violence. As well as frequent verbal and physical violence, attacks by
armed groups are on the rise in several states and the local
authorities have had little success in reining it in,” said a recent
RSF statement.

The media rights body also added that it had repeatedly urged the
Union government in New Delhi to launch a national action plan for the
safety of journalists and for the prevention of dangers and threats to
them, however RSF’s requests had so far gone unheeded.
Lately the Press Council of India chairman justice (retired)
Chandramouli Kumar Prasad came forward to strongly condemn the killing
of scribes and urged the Centre to enact a special law for protection
of journalists and speedy trial of cases of attacks & assaults on the
media persons.

“Nearly 96 per cent of the cases of killing of journalists have not
been taken to logical conclusion and are either languishing in the
courts or in some cases, investigation reached dead-end in the last
two decades, as reported by a Committee of the PCI,” said the press
council chairman.

Across the globe, over 25 journalists lost their lives to assailants
(from 1 January 2016 till date), where India emerges as one of the
deadliest countries. According to the CPJ, India finds itself with
troubled countries like Mexico, Yemen, Afghanistan, Iraq etc losing
over three journalists each in the last four months. After Syria (2)
and Turkey (2), Philippines, Guinea, El Salvador and Pakistan
(Muhammad Umar of Daily Dera News) recorded the murder of one
journalist each till date this year.

Earlier the northeast India based scribes also joined in the protest
against the killing of journos in central Indian provinces. The
representatives of various journalist organizations assembled in front
of Guwahati Press Club on 16 May and demonstrated their angers.
Covering their mouths with black clothes, the demonstrators also
demanded stringent actions against the culprits.

The Guwahati demonstrators also supported the move for special
protection laws for the benefit of working journalists across the
country and called upon the Narendra Modi led Union government in New
Delhi to formulate a national action plan to safeguard the media
persons, who pursue critical journalism for the interest of society,
nation and the human race.

Facing the heat of protests, the Jharkhand police arrested two persons
suspecting their involvement in the killing of Yadav. According to the
police the arrest was made on the basis of CCTV records, mobile call
details and other relevant evidences. Lately, the Bihar police also
arrested five persons suspecting their role in the murder of Ranjan.
Few others were detained by both the Jharkhand and Bihar police for
further interrogation.

However, adding worries to the Bihar government, Ranjan’s father Radha
Chaudhary and wife Asha Devi demanded a Central Bureau of
Investigation (CBI) probe to unearth the killers and they publicly
declared that they had little faith in the local police. Many Bihar
based journalists also asked for a CBI probe into Ranjan’s murder,
which compelled the State chief minister Nitish Kumar to recommend for
a CBI investigation to look into the matter.

India - Maternity entitlements on hold: How the govt has undermined women’s and children’s rights
Narendra Modi's Flagship - Farmers losing fertile land
Death threats, assault and harassment have not deterred Vyapam whistleblower
NHRC acts on complaint of journalists being targeted amid lockdown in Varanasi