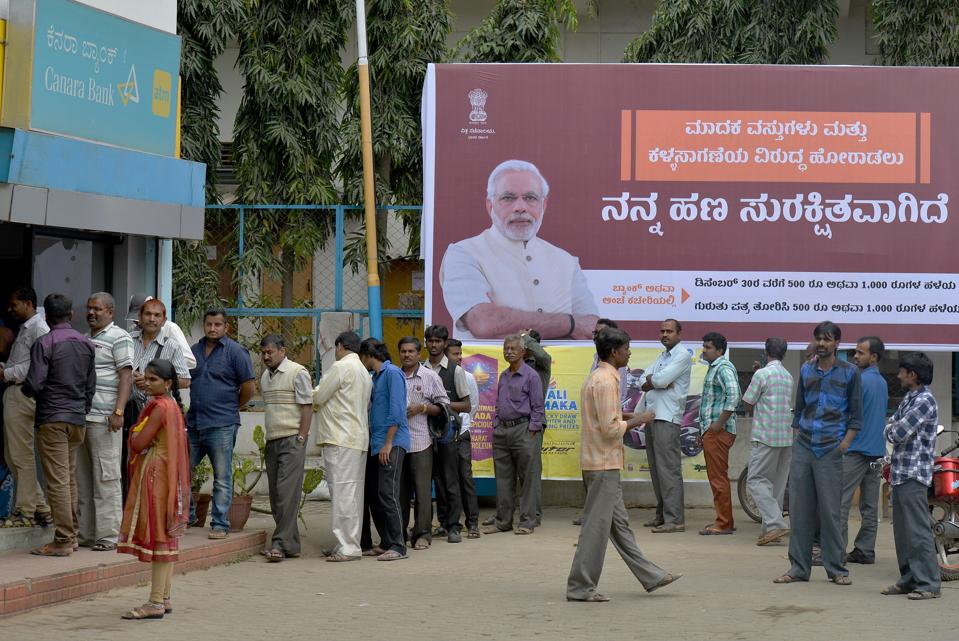 Indians queue near an ATM counter at an Indian bank to withdraw money in Bangalore on November 21, 2016. (Photo credit AFP/Getty Images).

Last year on November 8, Indian Prime Minister Narendra Modi declared that all 500 and 1,000 rupee notes would cease to be legal tender in a surprise television announcement. Demonetization, as it was called, applied to 86% of the value of all currency in circulation.

One year later, with data now available, it’s time to assess what demonetization has actually wrought — the good and the bad.

The good news starts with the widening of the tax base. The number of income tax returns filed for 2016-17 year grew by 25%, which is crucial to ease pressure on public finances in a country that has well over 1.25 billion people but less than 30 million file tax returns.

However, there have been conflicting claims on the tax surge. In May, Finance Minister Arun Jaitley said 9.1 million new taxpayers were added, but in August, Prime Minister Modi said there was an increase of 5.7 million taxpayers after demonetization. Meanwhile, the Economic Survey put the number of new taxpayers at 5.4 million, or just 1% of all individual taxpayers. 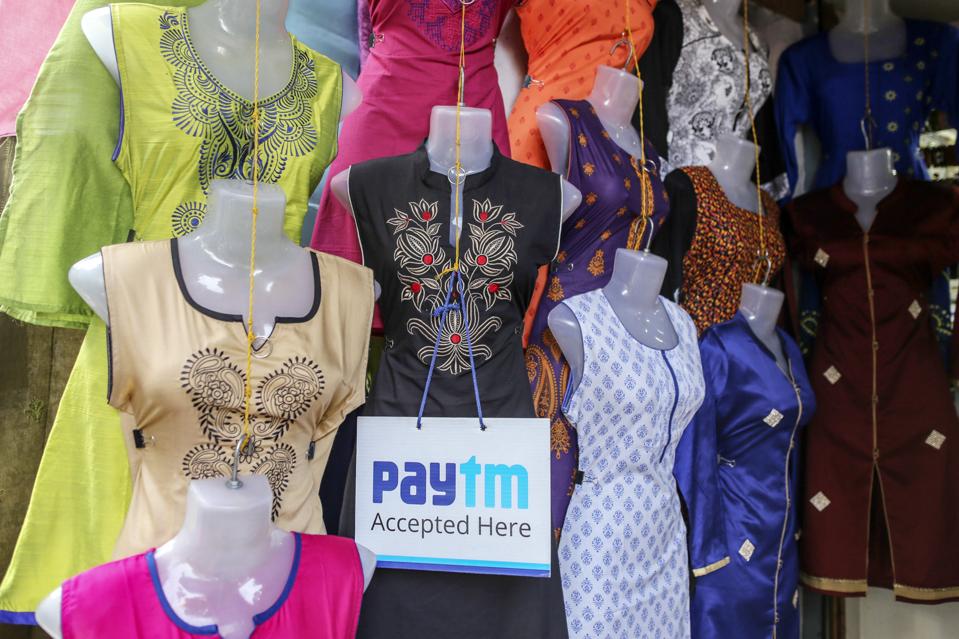 Demonetization has given digital wallets like Paytm, MobiKwik and Freecharge an extra push. (Photo credit Bloomberg).

Digital transactions have surged, too. More efficient than paper money, digital money is expected to bring in transparency into the system. The hands-down winners are the mobile wallet players, particularly Alibaba-backed Paytm, which now has 250 million registered users. That’s a 105% increase from January 2016.

Innovation emerged as well, such as the government-backed payment app BHIM, which facilitates easy electronic transfers between bank accounts. But digital payments haven’t substituted the use of paper money as India still remains a cash economy.

So do these few improvements set off the hardship and job losses amo­ng the most vulnerable?

Demonetization wrecked the primarily cash-reliant rural economy, adding distress to mounting debts. The agricultural sector, which is behind in reforms and investment, worsened due to cash shortages,  plunging demand and collapsing prices. Prices of potatoes, onions and tomatoes were half of what they had been a year before in January-February. The outcome was widespread suffering and farmer unrest in the states of Madhya Pradesh, Maharashtra, Gujarat, Tamil Nadu and Rajasthan.

The downturn spilled over to other sectors. A survey by India Development Foundation found that production took a hit, accompanied by fall in employment, wages and job losses in the two months after demonetization. In Mumbai, more than 50% of the power loom units were shut down, impacting around 300,000 workers. Around 1.5 million jobs were lost in the first four months of this year.

Read more on Forbes: How India Is Surviving Post-Demonetization

Surveys done by the Punjab Haryana Delhi Chamber of Commerce and Industry, All India Manufactures Association and State Bank of India showed that the impact was between 50% and 80% on small and unorganized sectors. The Reserve Bank of India’s Annual Report (RBI) stated that industry slowed down. 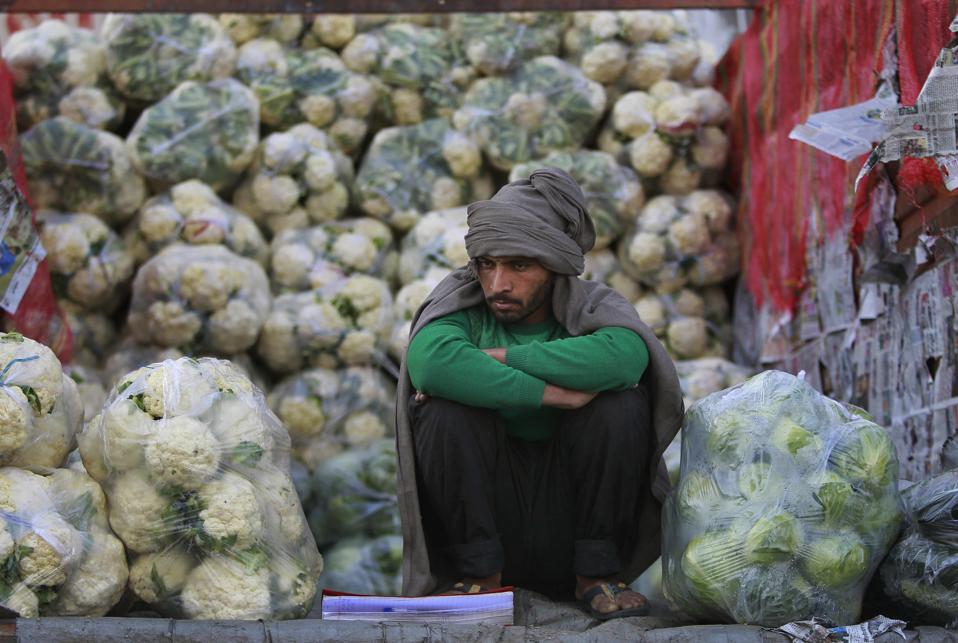 An Indian farmer waits for the customers to sell his harvest at a wholesale market on the outskirts of Jammu, India. Farmers were among those who bore the maximum brunt of demonetizaion. (AP Photo/Channi Anand)

The economy is also still coping with aftermath. In the first quarter of fiscal 2017-18, growth slumped to 5.7% compared to 7.1% in the same quarter of the previous year.

Although there is no way to be absolutely certain that the cause of all this is demonetization, there are some telltale signs: Rural loans increased by only 2.5% between October 2016 and April 2017; the growth in industrial outputin April was 3.1%; and the construction sector registered negative gross value added growth.

Too high a cost?

On top of this, little black money has been brought to light. Of the $240 billion USD worth of the notes removed from circulation, the government estimated that as much as a third wouldn’t be deposited in banks, implying that black marketeers would junk their undeclared cash than risk being found out. But this didn’t happen. According to RBI’s report, banks received around $220 billion USD, or 99% of the money.

Even as RBI stated that there has been a significant increase in the rate of fake currency note detection, the government’s freshly minted 2,000-rupee notes, issued after demonetization, are already being counterfeited. If this was not enough, the RBI suffered a loss printing new currency notes — the cost of printing notes was nearly $900 million in 2016-17, which is double the $450 million spent a year prior.

All in all, demonetization accomplished too little while causing too much collateral damage. But despite the economic toll, Modi has solidified his power base.

India - Is there Untouchability even in Death? #Hallofshame
Chandigarh- Protest against the ' merciless killing ' of Fr Stan Swamy
Couples who share the housework are more likely to divorce, #wtfstudy #wtfnews
How the US Turned Three Pacifists Into Violent Terrorists