India‘s government is giving a unique ID to each of its 1.2 billion citizens, creating the world’s largest biometric data set. But the rollout has hit snags. Jagvati Khandelwal, shown here, says she hasn’t been able to log on to the ID registry with her fingerprints, depriving her of subsidized food at the New Delhi supplier where she shops.
By
GABRIELE PARUSSINI

NEW DELHI—India’s new digital identification system, years in the making and now being put into widespread use, has yet to deliver the new era of modern efficiency it promised for shop owner Om Prakash and customer Daya Chand.

At first, it drove both men up a tree.

The system, which relies on fingerprints and eye scans to eventually provide IDs to all 1.25 billion Indians, is also expected to improve the distribution of state food and fuel rations and eventually facilitate daily needs such as banking and buying train tickets.

But Mr. Prakash couldn’t confirm his customers’ identities until he dragged them to a Java plum tree in a corner of his village near New Delhi’s international airport. That was the only place to get the phone signal needed to tap into the government database. 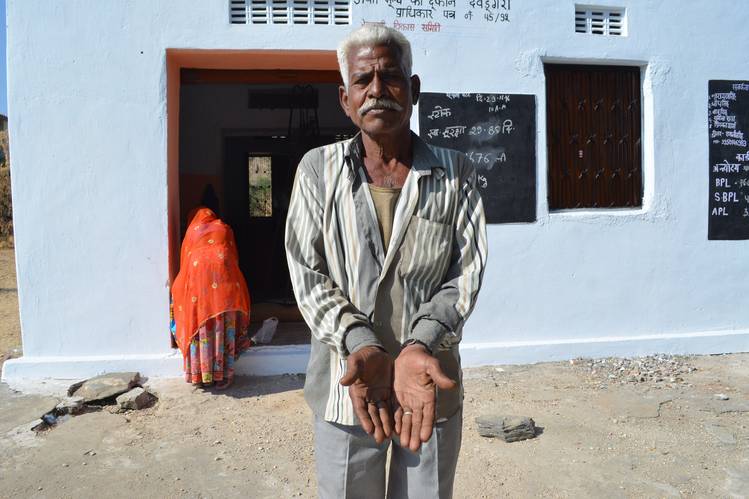 Panna Singh, who breaks stones for a living, shows his hands gnarled by manual work, after a scanner failed to match his fingerprints with the Aadhaar database at a village in Rajasthan in December. PHOTO: GABRIELE PARUSSINI/THE WALL STREET JOURNAL

“I hopped on a chair and put my finger in the machine,” said Mr. Chand, a 60-year-old taxi driver. Getting his state food ration “used to be much easier,” he said.

In a system so vast, even small glitches can leave millions of people empty-handed.

The government began building the system, called Aadhaar, or “foundation,” with great fanfare in 2009, led by a team of pioneering technology entrepreneurs. Since then, almost 90% of India’s population has been enrolled in what is now the world’s largest biometric data set.

Prime Minister Narendra Modi, who set aside early skepticism about the Aadhaar project after taking power in 2014, is betting that it can help India address critical problems such as poverty and corruption, while also saving money for the government. 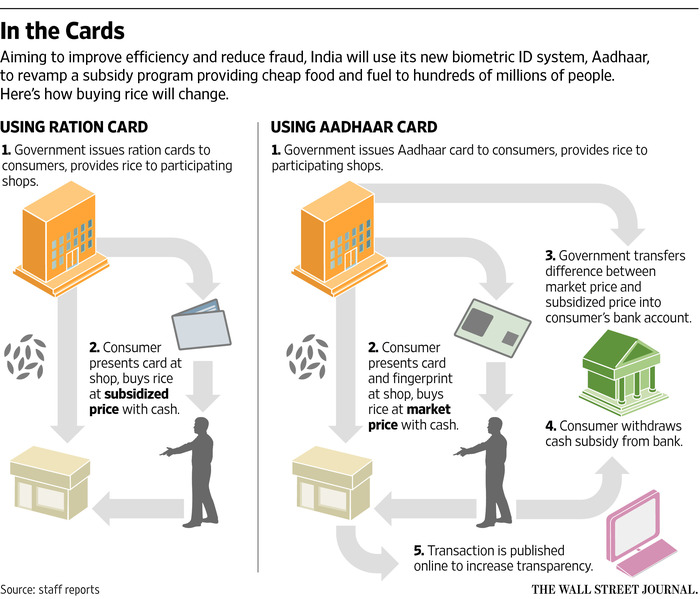 But the technology is colliding with the rickety reality of India, where many people live off the grid or have fingerprints compromised by manual labor or age.

Panna Singh, a 55-year-old day laborer in the northwestern state of Rajasthan who breaks stones used to build walls, says the machine recognized his scuffed-up fingerprints only a couple of times.

“I’ve come twice today,” he said at a ration shop in the village of Devdungri. “That’s a full day of work, gone.”

Iris scans are meant to resolve situations where fingerprints don’t work, but shops don’t yet have iris scanners. 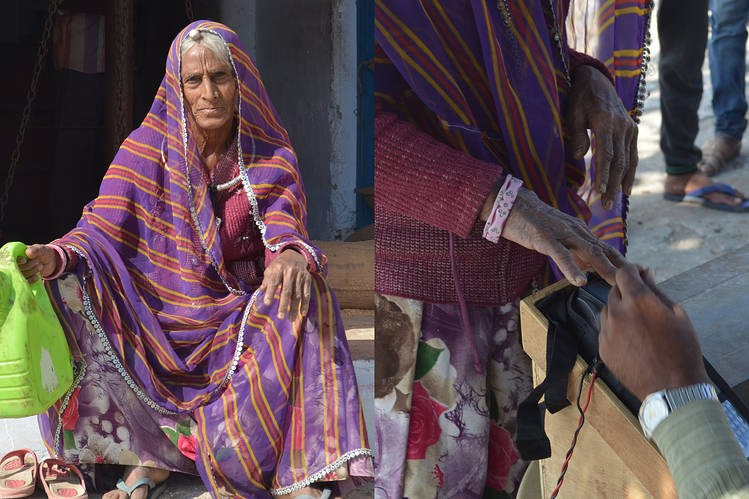 Hanja Devi, 80 years old, used a fingerprint reader at a ration shop in Rajasthan. But she couldn’t log in with her fingerprints and left with an empty kerosene container. PHOTO: GABRIELE PARUSSINI/THE WALL STREET JOURNAL

Ajay Bhushan Pandey, chief executive of the government agency that oversees Aadhaar, said kinks will be ironed out as the system is used, as is the case with software rollouts. It works 92% of the time, and that will rise to 95%, he said.

“On the scale of what [Aadhaar] has achieved, the rollout has been remarkably smooth,” said Nandan Nilekani, the Infosys co-founder who spearheaded the project. “I don’t see any issues that are disproportionate to the size of project.”

An Aadhaar ID is intended to be a great convenience, replacing the multitude of paperwork required by banks, merchants and government agencies. The benefits are only just beginning, backers say, as the biometric IDs are linked to programs and services.

But in rural areas, home to hundreds of millions of impoverished Indians dependent on subsidies, the impact of technical disruptions has already been evident.

After walking for two hours across rough underbrush in Rajasthan to get kerosene for the month, Hanja Devi left empty-handed because the machine couldn’t match her fingerprint with her Aadhaar number. 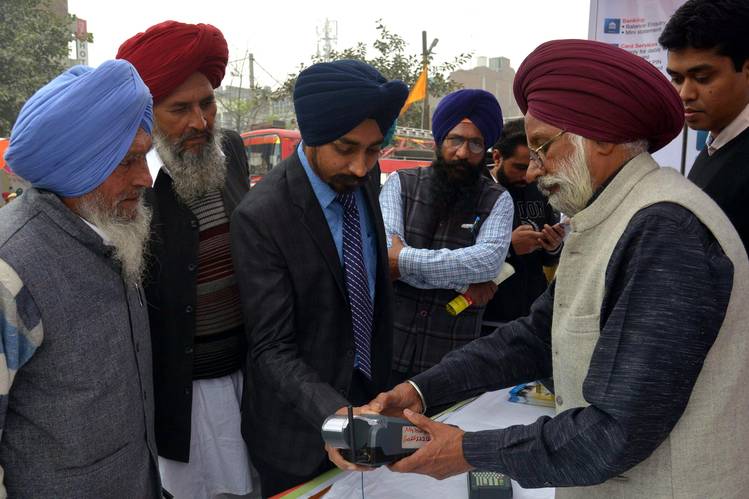 A visitor uses his thumbprint to try a system to withdraw money from his bank account using his Aadhaar identification card at an event promoting digital payment in Amritsar, India last week. PHOTO: AGENCE FRANCE-PRESSE/GETTY IMAGE

Ranjit Singh, who operates the shop, said five of the 37 customers before Ms. Devi also left the shop empty-handed, a failure rate of over 15%.

A shop manager in a neighboring village said identification had failed for a similar portion of his 500 customers.

India has issued Aadhaar to a much of its population, and transactions that use the biometric ID are rising fast

Any biometric recognition system of Aadhaar’s size is bound to show duplicates, meaning some people’s biometric identifiers will match someone else’s when they try to enroll.The new system hasn’t eliminated attempts at fraud. In August, police in Rajasthan accused two shop managers of linking their fingerprints to a multitude of cards and stealing for months the rations of dozens of clients.

Hans Varghese Mathews, a mathematician at the Bangalore-based Center for Internet and Society, used the results of a test run by Aadhaar officials on a sample of 84 million people to extrapolate the figure for India’s total population. The error level is less than 1%, but in the world’s second-most populous country, the snag would still affect about 11 million people, he said.

Government officials disputed the calculation, saying the number of duplicates would be much smaller—and that it would take only seven analysts to manage the error caseload.

As for trouble connecting to the registry, better infrastructure, including steadier internet connections, will eventually also help, Mr. Pandey said.

For now, Mr. Prakash has found a way to cope without climbing trees. After scouring the village, he set up a shack in a spot with enough bandwidth for his fingerprint scanner to work. It is hardly efficient. He issues receipts in the morning at the shack, then goes back to his shop to hand out the grains. Customers have to line up twice, sometimes for hours.

Mr. Prakash has applied to the government to operate without biometric identification, but his request was turned down, he said. “They said: ‘You have to keep trying.’ ”

Write to Gabriele Parussini at gabriele