After an election that took a month and a half to complete, the BJP — a party usually described as right-of-center and Hindu nationalist— looks to have won a majority of seats in India’s lower house of parliament. (Votes are still being counted, so all seat and vote totals are tentative). Opinion polls had predicted a BJP win, but not one of this magnitude. Even before the results were in, many were calling this a historic election. The ruling party, Congress, was beset with corruption scandals, while the BJP appeared to be riding high on the popularity of its prime ministerial candidate, Narendra Modi. Since the news analysis in the days and weeks to come is almost certain to emphasize the historic proportions of this election, here are a few reasons why this election might not be as historic as it is likely going to be made out to be.

First, as of the most recent counting, almost 70 percent of Indians did not vote for the BJP. Commentators such as Max Fisher at Vox claim that the BJP “dramatically … swept the vote.” In fact, the BJP won about 31 percent of the vote, a new high for the party. Although this is the first national election in which the BJP has ever won more votes than any other party, less than a third of Indians voted for it. The BJP’s legislative majority is largely a function of India’s single-member district (SMD) electoral system, the same system used in American, British, and Canadian legislative elections. In an SMD system, votes rarely translate proportionally into seats. This system rewards parties that are the largest in each electoral district. The BJP’s vote is patchily distributed across India, which works to its advantage. In a number of states where it is disproportionately strong, the BJP was, in district after district, the largest party, even if not always by a very large margin. For example, in India’s largest state, Uttar Pradesh, the BJP won about 42 percent of the vote. However, it is likely to win 71 of Uttar Pradesh’s 80 seats (almost 90 percent) because the remaining 58 percent of the vote was split across a number of different parties.

Meanwhile, in states where the BJP won few seats, it did quite poorly. Thus, relatively few of the BJP’s votes were wasted—that is, cast in electoral districts where the party ultimately failed to win a legislative seat. As a result, the party won a legislative majority on a fairly small vote share. Previously, no party had won a legislative majority with less than 40 percent of the vote. Meanwhile, Congress suffered an ignominious defeat in part because its vote was fairly evenly distributed across the country. Coming in second or third place across many electoral districts brings no electoral reward. In this election, Congress looks a lot like the Liberal Democrats in Britain—a party that typically wins respectable vote shares in lots of districts but fails to win many seats.

Second, with a few exceptions, this election did not change the basic geography of elections in India. Thanks in large part to dozens of small regional parties that each wins support in only one or two states, political competition in India varies tremendously from state to state. Across the board, the BJP improved its performance (see Figure 1). However, its performance improved most in states where it was already fairly competitive. In states where the party has never been strong, it remains the third, fourth, or even fifth most popular party. The BJP remains relatively uncompetitive across a large swathe of southern and eastern India. Until the BJP can significantly improve its performance in these areas, the party is unlikely to be able to win much more than a third of the national vote, which will make it difficult for the party to reliably replicate a similar election result in the future. That being said, if the BJP can retain its following in the populous northern states of Bihar and Uttar Pradesh and the northeastern state of Assam, then this election could mark an important turning point for the party. However, that is a big “if.” The BJP has previously experienced noticeable electoral declines in Uttar Pradesh following big election wins. 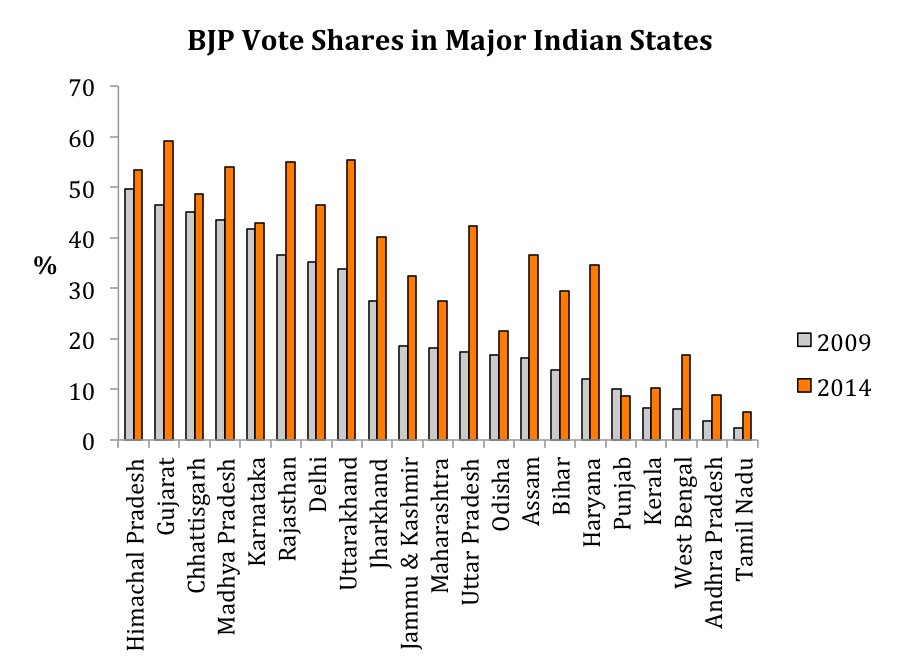 Third, this election probably does not herald a major realignment in Indian politics. This was a great election for the BJP. By the same token, this was — far and away — Congress’ worst ever showing. But, 2014 represents little more than a role reversal for the country’s two main parties from 2009. In the last election, Congress won about 29 percent of the vote to the BJP’s 18 percent. This year, those numbers are 31 percent for the BJP and 19 percent for Congress. The gap in seat shares between the largest and second largest parties widened significantly in this election, but that is a function of where votes were won. In terms of popular support, the BJP largely accomplished in 2014 what Congress achieved five years earlier. The fact that the tables have turned is noteworthy, but probably not a sign of a fundamental shift in the nature of political competition.

Fourth, regional parties remain an important part of Indian politics. For the past 20 years, regional parties—parties active mainly in only one or two of India’s states—have been critical ingredients in governing coalitions at the national-level. Having won a majority of seats, the BJP can likely govern without any regional allies. In that sense, regional parties’ influence in national politics is almost certain to decline in the near-term. But, the 2014 verdict does not herald a nationalization of politics. India’s two main national parties won only about 50 percent of the vote. The other half went to these tiny, most regional, parties, just as in the past four national elections. Several states held state-level elections simultaneously with the national elections, and in each one, the victors were regional parties. Although their voices may be quieter in national-level politics for the next five years, 2014 was not actually a bad year for regional parties.