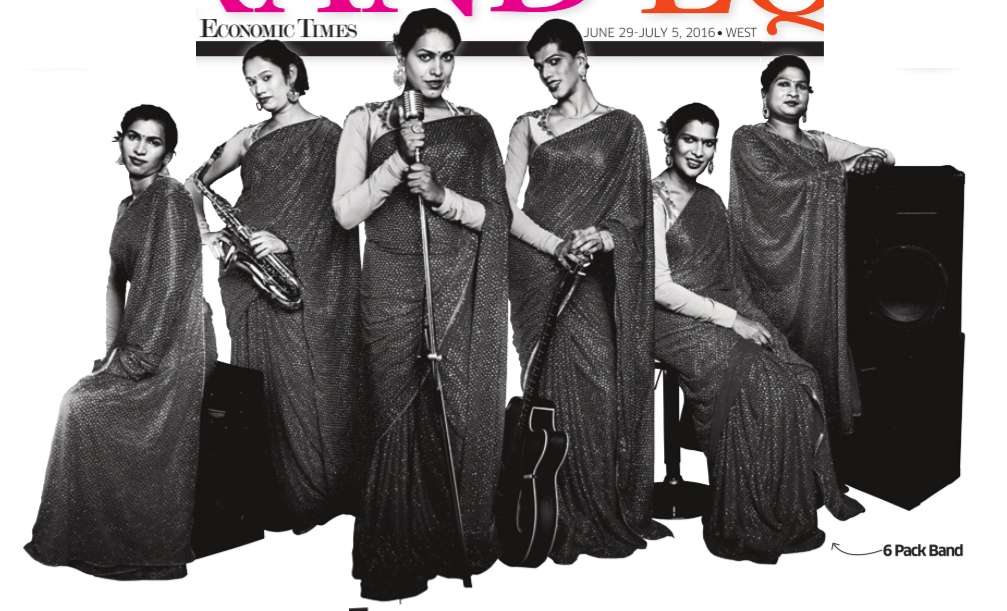 The origin story of India’s second Glass Grand Prix featuring six exceptional singers and a strong cuppa chai.
When content creator YF i l m ‘s Ashish Pati l got a call from a friend from his advertising days to congratulate him for winning a Glass Lion at Cannes Lions for `6 Pack Band’, India’s first transgender music group, he had no idea what it meant. Media agency Mindshare entered the campaign in the international competition and collected the award at a grand ceremony.When Patil received the first call he just assumed it was Gold, Silver, Bronze and Glass. Fourth prize! It’s actually the ultimate prize -Grand Prix in the Glass Lion category, which was launched last year at Cannes Lions International Festival of Creativity to award creative work that addresses and impacts gender inequality.A Glass Grand Prix is a big deal. Even for a campaign that’s already broken some well-established industry norms.It ‘s backed by a ma rketer who’s as traditional as they get -Hindustan Unilever (H U L). It’s a campaig n for an over-century old mass tea brand ­ Brooke Bond Red Label. It was created by Y-Films, part of Yash Raj Films, and media agency, Mindshare, no creative ad agency was involved. It has raked in millions in views, received the kind of coverage money can’t buy, and is featured in documentaries and shows like Hollywood actor Ellen Page’s Gaycation. It’s also a brand campaign that has forever changed the lives of six people: Asha Jagtap, Bhavika Patil, Chandni Suvarnakar, Fida Khan, Komal Jagtap and Ravina Jag tap, members of the pop music group, 6 Pack Band. These women have lived on the fringes, discarded and disrespected by families and society. Now the best parts of their days are getting recognized by people in local trains, getting offers to perform from the Czech Republic, rubbing shoulders with celebrities, and, perhaps far more importantly, getting long-overdue phone calls from fathers who had ostracized their children 14 years ago.

One couldn’t have timed the campaign better. Conversation about the LGBTQ community’s rights is in the forefront in India and across the world. A recent mainstream Hindi film Kapoor & Sons finally tackles the subject in a way unlike its careless predecessors did and contemporaries still do. Last year, US President Barack Obama became the first sitting-president to appear on the cover of Out Magazine, an LGBT magazine. News of courts ruling in favour of gay marriages is celebrated far and wide, nationality be damned. However, despite all the progress made in the recent past, and pardon our French but it must be said, it took major cojones to turn an “outrageous idea“ into a marketing campaign in a society that’s still rather cruel to and unaccepting of the LGBTQ community. The gamble, however, paid off.

The journey of India’s first music band made up of hijras began with one song, a cover of Pharrell Williams’ `Happy`.Here’s how each of the stakeholders, client, content maker, and agency came together to make the 6 Pack Band a glorious reality.

Y-Films’ Patil tells us 6 Pack Band would have happened with or without a brand sponsor. This degree of conviction is one of the factors that convinced HUL to jump on board. That and 19 presentations designed to turn doubtful company executives, who would descend into long spells of si lence and then utter the words, “It’s very bold!“ when they first heard the idea. There’s also the fac that 6 Pack Band was never designed as a gimmick. “It’s not a one-off promo to win an award“ says Patil.Then came the real challenge -talent. Y-Film’s scouts were deployed everywhere, from traffic signals and trains to NGOs. At several points dur ing the audition, casting directors and Patil reached breaking point while trying to weed out phoneys -“strugglers from Yari Road“ who posed as hijras for a shot at fame. It took months to find the six band members.The team confronted their own preconceptions, too.At the beginning they con sidered naming the band Chakkapella.However, the company decided against it because not only is it demeaning but also the community itself is trying to distance itself from the term. It took another few weeks to acquire the music rights for the band’s first song, a cover of Pharrell Williams `Happy’. It was a tossup between `Happy’ and John Lennon’s `Imagine’. Both posed a challenge as several entities own rights to the songs. But Y-Film’s chose `Happy’ for its contempo rariness, borderless appeal, and for sheer joy it exudes. The song is rather appropriate too. As Patil points out, “Have you ever seen a sad hijra?“

The provenance of 6 Pack Band is M i n d S h a r e ‘s C o nt e nt+ p r o du c t `Content Day’, a kind of match-making program for creators and clients like HUL. It’s about customising content ideas for brands to resolve some of the tasks or objectives, says Prashanth Kumar, CEO, Mindshare South Asia. Hundreds of ideas are thrashed, refined, shortlisted, re-packaged and then presented to the client. There were many ideas competing with 6 Pack Band; stories of togetherness, a radio piece about how conflicts get resolved over a cup of tea. But none pushed the envelope enough. Having said that, many thought 6 Pack Band was pushing the envelope off the cliff entirely. 70% of the agency thought the idea was rubbish. Says Amin Lakhani, leader, South Asia ­ Team Unilever at Mindshare, “There were very few takers. (After the win at Cannes, many of them came up to us and congratulated us though.) Imagine going to Unilever with this! Yes, it will create conversations but will it connect with Gita of Gorakhpur?
That was the challenge. Navigating talkability versus authenticity. It even got knocked out from the final presentations, an evening before Content Day.“ But they looked at the campaign again, threw caution to the wind and pitched the idea to HUL. Says Kumar, “The leaders for the team convinced the stakeholders. Finally someone who was convinced, persuaded someone else who wasn’t; it was an involved process.It was a risk, but we were not totally wrong in taking it. The brand of course had a higher risk than we did.“ Lions aside, positive sentiment scores, interests from celebrities to be a part of the initiative, climbing viewership and engagement rate, reams of earned media and a happy client are ample validation.The risk paid off.

You know you’ve hit one out of the park when your global CEO (Paul Polman) shows off the campaign at international events. Unilever is one of the main faces of the “purpose driven brand“ movement. Much like Tata Tea’s Jaago Re, Brooke Bond Red Label has been championing the cause of harmony and equality in its advertising. Nevertheless, when the HUL team heard the idea of a transgender music act with the brand as title sponsor, it was “a bolt from the blue“ as Shiva Krishnamurthy, category head, tea, HUL, puts it. “Where is this coming from!“ they cried. It took a while to sink in and some good ol’ salesmanship for HUL to buy in. “But it felt true to our purpose,“ says Krishnamurthy.It wasn’t easy though. Marketers like HUL are used to being gatekeepers, dictating, for instance, how the tea ought to be made, boiled, poured and sipped and how often. And the pack should be at a 47.99 degree angle and placed on the coffee table in the living room (naturally!), and hold the cup a few inches a higher, yes, right in front of your face, if you please.

Choosing to give up some control and trusting the experts did create a little discomfort; “But as we went along we realized these guys know what they are doing. It requires a change in mindset because this is not traditional advertising! All we were doing was brand stewardship, making sure the brand is meaningfully integrated.“ So what did 6 Pack Band do for the brand? “We just wanted to be clear that there should be no growth negative. Apart from the usual tracking mechanisms, we had dipsticks to see if there’s right shift in imagery. But this is not traditional advertising, which is still our bread and butter. It’s not one of those things where you get scientific -cause and effect.“

Nonetheless, here’s an encouraging statistic if you thought the band’s status overshadowed the brand. For the first song, 92% of the people didn’t mention the brand. By the fifth song, 68% of consumers associated Brooke Bond Red Label with the songband.

The Grand Prix win at Cannes Lions they believe will further the campaign’s reach. On whether there will be life after the Lions for the BBRL’s 6 Pack Band, he says the company is not in the business of music, naturally. But technically they are the title sponsors of the band so HUL will have the option to continue the partnership. But there’s another consequence of winning a coveted ad award. Krishnamurthy believes award wins like these mean brands becomes a magnet for top-notch creative talent. The power of ideas is recognized.Pray that doesn’t translate into the power of ideas can be copied. We really can’t deal with another subset of the ——powertising genre.