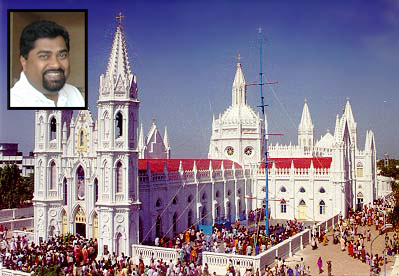 Police investigation of Sanal Edamaraku for debunking a “miracle” at a church is a crime against the Constitution.

Early in March, little drops of water began to drip from the feet of the statue of Jesus nailed to the cross on the church of Our Lady of Velankanni, down on to Mumbai‘s unlovely Irla Road. Hundreds began to flock to the church to collect the holy water in little plastic bottles, hoping the tears of the son of god would sanctify their homes and heal their beloved.

Sanal Edamaruku, the eminent rationalist thinker, arrived at the church a fortnight after the miracle began drawing crowds. It took him less than half an hour to discover the source of the divine tears: a filthy puddle formed by a blocked drain, from where water was being pushed up through a phenomenon all high-school physics students are familiar with, called capillary action.

For his discovery, Mr. Edamaruku now faces the prospect of three years in prison — and the absolute certainty that he will spend several more years hopping between lawyers’ offices and courtrooms. In the wake of Mr. Edamaruku’s miracle-busting Mumbai visit, three police stations in the capital received complaints against him for inciting religious hatred. First information reports were filed, and investigations initiated with exemplary — if unusual — alacrity.

Mr. Edamaruku isn’t the kind to be frightened. It takes real courage, in a piety-obsessed society, to expose the chicanery of Satya Sai Baba and packs of lesser miracle-peddlers who prey on the insecurities of the desperate and gullible. These actions have brought threats in their wake — but never from the state.

India‘s Constitution obliges all citizens to develop “scientific temper, humanism and the spirit of inquiry and reform”. India’s laws, though, are being used to persecute a man who has devoted his life to doing precisely that.

Like dozens of other intellectuals and artists, Mr. Edamaraku is a victim of India’s god laws — colonial-era legislation obliging the state to punish those who offend the faith of others. Section 295 of the Indian Penal Code criminalises the actions of “whoever destroys, damages or defiles any place of worship, or any object held sacred by any class of persons”. Its sibling, Section 295A, outlaws “deliberate and malicious acts intended to outrage religious feelings of any class”. Section 153B goes further, proscribing “any act which is prejudicial to the maintenance of harmony between different religious, racial, language or regional groups or castes or communities”. Alarmingly, given the sweeping generalities in which these laws are written, truth is not an admissible defence.

In the decades since independence, these laws have been regularly used to hound intellectuals and artists who questioned religious beliefs. In 1993, the New Delhi-based progressive cultural organisation, Sahmat, organised an exhibition demonstrating that there were multiple versions of the Ramayana in Indian culture. Panels in the exhibition recorded that in one Buddhist tradition, Sita was Ram’s sister; in a Jain version, she was the daughter of Ravan. Even though the exhibits drew on historian Romila Thapar’s authoritative work, criminal cases were filed against Sahmat for offending the sentiments of traditionalist Hindus.

Punjab has seen a rash of god-related cases, mainly involving Dalit-led heterodoxies challenging the high traditions of the Akal Takht. In 2007, police filed cases against Gurmeet Ram Rahim Singh, the head of the syncretic Saccha Sauda sect, for his purportedly blasphemous use of Sikh iconography. Earlier, in 2001, similar charges were brought against Piara Singh Bhaniarawala, after he released the Bhavsagar Granth, a religious text suffused with miracle stories.

Islamic chauvinists have shown the same enthusiasm for the secular state’s god laws as their Sikh and Hindu counterparts. Earlier this year, FIRs were filed against four writers who read out passages from Salman Rushdie‘s The Satanic Verses — a book that is wholly legal in India. Fear of Islamic neo-fundamentalists is pervasive, shaping cultural discourse even when its outcomes are not as dramatic as Mr. Rushdie’s case. In 1995, writer Khalid Alvi reissued Angaarey — a path-breaking collection of Urdu short works banned in 1933 for its attacks on god. The collection’s most-incendiary passages were censored out. India’s feisty media didn’t even murmur in protest after the magazine India Today was proscribed by Jammu and Kashmir in 2006 for carrying a cartoon with an image of the Kaaba as one among a metaphorical pack of political cards.

Even religious belief, ironically enough, can invite prosecution by the pious. Last year, the Kannada movie actress, Jayamala, was summoned before a Kerala court, along with astrologer P. Unnikrishna and his assistant Reghupathy, to face police charges that she had violated a taboo against women in the menstruating age from entering the Sabrimala temple.

For the most part, judges have shied away from condoning criticism of the pious, perhaps fearful of being held responsible for public disorder. In 1958, the Supreme Court heard litigation that grew out of the radical politician, E.V. Ramaswamy Naicker’s decision to break a clay idol of Ganesha. Lower courts had held, in essence, that the idol was not a sanctified object. The Supreme Court differed, urging the lower judiciary “to pay due regard to the feelings and religious emotions of different classes of persons with different beliefs, irrespective … of whether they are rational or otherwise”.

Earlier, in 1957, the Supreme Court placed some limits on 295A saying it “does not penalise any and every act of insult to or attempt to insult the religion”. Instead, it “only punishes the aggravated form of insult to religion perpetrated with deliberate and malicious intention” (emphasis added). The court shied away, though, from the key question, of what an insult to religion actually was.

Hearing an appeal against the Uttar Pradesh government’s decision to confiscate Naicker’s contentious Ramayana, the Supreme Court again ducked this issue. In 1976, it simply said “the law fixes the mind of the Administration to the obligation to reflect on the need to restrict and to state the grounds which ignite its action”. “That is about all”, the judges concluded.

That hasn’t, however, been all. In 1998, the Supreme Court upheld Karnataka’s decision to ban P.V. Narayanna’s Dharmakaarana, an award-winning re-reading of the Hindu saint, Basaveshwara. In 2007, the Bombay High Court similarly allowed Maharashtra to ban R.L. Bhasin’s Islam, an aggressive attack on the faith. There have been several other similar cases. In some, the works involved were scurrilous, even inflammatory — but the principles established by courts have allowed State governments to stamp out critical works of scholarship and art.

Indians have grappled with these issues since at least 1924, when Arya Samaj activist Mahashe Rajpal published the pamphlet that led the state to enact several of the god laws. Rangila Rasul — in Urdu, ‘the colourful prophet’ —was a frank, anti-Islam polemic. Lower courts condemned Rajpal to prison. In the Lahore High Court, though, Justice Dalip Singh argued that public outrage could not be the basis for legal proscription: “if the fact that Musalmans resent attacks on the Prophet was to be the measure [of legal sanction]”, he reasoned, “then an historical work in which the life of the prophet was considered and judgment passed on his character by a serious historian might [also] come within the definition”.

In 1927, when pre-independence India’s central legislative assembly debated the Rangila Rasul affair, some endorsed Justice Singh’s message. M.R. Jayakar likened religious fanaticism to a form of mental illness, and suggested that those who suffer from it be segregated “from the rest of the community”. This eminently sane suggestion wasn’t, however, the consensus: the god laws were expanded to expressly punish works like Rangila Rasul.

Perhaps Indians can congratulate themselves that the god laws have not been used to persecute and kill religious dissenters, as the ever-expanding blasphemy laws which sprang up in Pakistan. Mr. Edamaruku’s case ought to make clear, though, just where things are inexorably headed. If Indians wish to avoid the fate of the dystopia to the country’s west, its citizens desperately need to accept the right of critics to attack, even insult, what they hold dear.

In 864 CE, the great physician, Abu Bakr Muhammad Ibn Zakaria al-Razi, wrote: “The miracles of the prophets are imposters or belong to the domain of pious legend. The teachings of religions are contrary to the one truth: the proof of this is that they contradict one another. It is tradition and lazy custom that have led men to trust their religious leaders. Religions are the sole cause of the wars which ravage humanity; they are hostile to philosophical speculation and to scientific research. The alleged holy scriptures are books without values”.

Following a rich scholarly life, and a tenure as director of the hospital in Baghdad patronised by the caliph Abu al-Qasim Abd ‘Allah, al-Razi died quietly at his home in Rey, surrounded by his students. In modern India, his thoughts would have led him to a somewhat less pleasant end.

#Aadhaar enrolment a 'harrowing experience’ for the disabled
147 Men of Manesar - In Jail ,why can't they get Bail ? #Justicedenied
Americans complicity in Prison Rape #Vaw #WTFnews
Mumbai: FIR Against Doctors If They Prescribe Swab Test Without Physical Examination