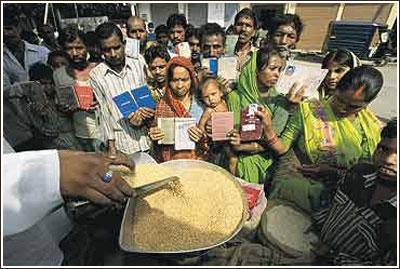 Going by the press note released on Tuesday by the Planning Commission, poverty level has shown steepest ever fall in recent history. Since 2004-05, coinciding with the UPA’s ascent to power, 138 million people have escaped the poverty trap. In rural areas the dip in poverty is stark: there were 326 million poor in 2004-05; in 2011-12 the number fell to 216 million—a decline of 110 million.

The political message in the new estimate is hard to miss. “It can be concluded that the rate of decline in the poverty ratio during the most recent seven-year period—2004-05 to 2011-12—was about three times of that experienced in the 11-year period between 1993-94 and 2004-05,” says the report. The earlier period of comparison coincides with the Opposition BJP’s tenure in government.

Chhattisgarh is the poorest state in the country with close to 40 per cent of its population being below the poverty line.  However, the geography of poverty remains the same. Seven states – Chhattisgarh, Bihar, Jharkhand, Madhya Pradesh, Odisha, Rajasthan and Uttar Pradesh – account for 61 per cent of India‘s total poor. These states traditionally host India’s poorest.

India - It’s not the question of EVMs alone but Democracy at Stake, Unanimous call for #Back2Ballot
Land grab in the name of development
Bihar: Journalist shot by men on bike 2 days after #GauriLankeshmurder
#India - in the shadow of AFSPA – Not so uncommon lives